If Beale Street Could Talk 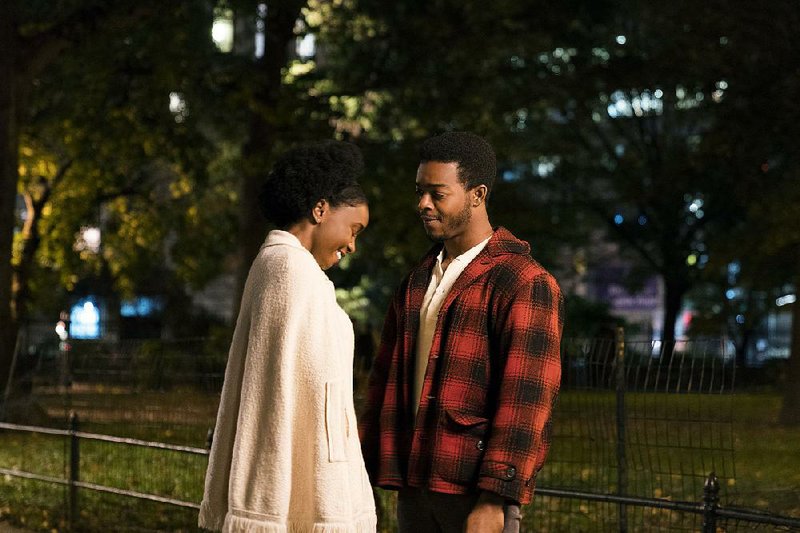 Tish (KiKi Layne) and Fonny (Stephan James) comprise a ’70s Romeo and Juliet in Barry Jenkins’ If Beale Street Could Talk, his follow-up to the Oscar-winning Moonlight.

There's a lush, nearly overripe quality to Barry Jenkins' If Beale Street Could Talk, his adaptation of a 1974 James Baldwin novel about lovers in a dangerous time, that feels at once old-fashioned and avant-garde, almost Godfather-esque in its formal execution.

Jenkins and and cinematographer James Laxton prefer gliding, dignified cameras and warm, saturated colors, even when the drama seems to suggest something more lowdown and dirty. Nicholas Britell's score employs lonely horns and fierce strings. This is a film that does not stoop or pander; it holds itself apart, magnificent and above the shabbiness of some of the characters.

If Beale Street Could Talk

This, it turns out, is its greatest virtue and perhaps the reason that the film might feel cool and remote to some audiences; Beale Street is a beautiful film on a couple of levels. At times it feels stagy and populated less by characters than mesmerizing actors with quality chops. Some moviegoers will not be able to keep themselves from analyzing -- and admiring -- Jenkins' work long enough to become involved in the story, which has particular resonance in an era when the credibility of female victims of sexual misuse is much discussed.

It begins not in Memphis -- the title is fraught; Baldwin credits Beale Street with the birth of the blues and the music stands as a metaphor for the condition of black Americans in the 20th century -- but in Harlem, on the scented night when childhood best friends 19-year-old Tish (KiKi Layne) and 22-year-old Alfonzo (Stephan James), known as Fonny, have decided to consecrate their lifelong love.

"Are you ready for this?" he asks.

"I've never been more ready for anything in my whole life," she replies, and they stroll through a park and gaze over the Hudson River. The scene is tracked from a great height, from the viewpoint of a benevolent god.

Yet all is not wonderful. This is a flashback, and now Fonny is in jail, (falsely) accused of rape by a young Puerto Rican woman, allegedly identified by a police officer who saw him running from the scene. There is no ambiguity here, we know Fonny is innocent; we know him as a fine young man, a sculptor who works in wood -- he may have stolen his tools, but otherwise his virtue is apparent.

At least it is to Tish and her family, a sturdy, loving brood who unquestioningly support Fonny and take up his case.

The relationships between these folks are sketched out early and convincingly in a scene where a nervous Tish has to tell her parents she's become pregnant. Her mother Sharon (Regina King) accepts the news with something milder than surprise; she helps her daughter break the news over dinner to her remarkably grounded father Joe (Colman Domingo) and brassy sister Ernestine (Teyonah Parris). Despite Tish's trepidation, it turns out to be a happy occasion -- a chance to break out the liquor and have a party. They summon Fonny's family, a somewhat unhappier group.

What ensues feels -- and is shot in the manner of -- a dynamite one-act play, as Fonny's church-lady mother (Aunjanue Ellis) and prissy sisters (Ebony Obsidian and Dominique Thorne) make clear their disdain for Tish. While Fonny's father (Michael Beach) aligns with Tish's family, the dynamic is toxic and there is, in context, a moment of shocking violence.

Unfortunately, though there are a few incisive moments interspersed through the the rest of the film, it never quite re-achieves the heights of that early scene. Jenkins makes his evil cop really evil, and the second half of the film feels a little didactic. Fonny and Tish are perhaps a little too beautiful, they fit together a little too seamlessly.

On the other hand, Tish's description of the way various customers choose to sniff the perfume she sells behind the make-up counter of a Manhattan department store is insightful sociology, and an indelible reminder of the after-effects of slavery. And Brian Tyree Henry, as one of Fonny's friends who has been shattered by a prison stint, is remarkable.

Beale Street is not Moonlight. It's a more conventional (though no less rigorously realized) movie that carries more ballast than most handsomely mounted, expertly performed prestige pictures. It's the sort of movie that Jenkins had the capital to make at this moment in his career, and it stacks up very well against the sort of movies that usually win a lot of Academy Awards. You could call it Oscar bait, and you wouldn't be wrong.

But at least it is Oscar bait with soul. 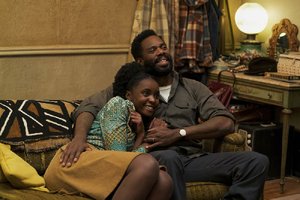 Tish’s father, Joe (Colman Domingo), and sister, Ernestine (Teyonah Parris), are overjoyed to learn that there’s a baby on the way in Barry Jenkins’ If Beale Street Could Talk.