Bolstered by an unexpected spike in corporate income tax collections, state general revenue in December increased by $16.5 million over the same month a year ago to a record-setting $605.9 million and exceeded the state's latest forecast by $8.7 million.

Last month's individual income tax collections also increased over year-ago figures, while sales and use tax collections dipped, but both fell short of the state's forecast for December, the state Department of Finance and Administration said Thursday in its monthly revenue report.

The reduced sales and use tax collections in December reflect a reduction in business-related spending last month compared with a year ago, said John Shelnutt, the state's chief economic forecaster.

Individual income taxes, and sales and use taxes are state government's largest sources of general revenue. General revenue helps finance public schools in the state, the state's two- and four-year public colleges, and human services and correctional programs, as well as an array of others. The state is halfway through fiscal 2019, which began July 1.

December's $605.9 million in general revenue collections represents a record for the month, exceeding the previous record of $589.4 million in 2017, said Whitney McLaughlin, a tax analyst for the finance department.

Other states are experiencing similar increases in tax revenue in the past several months, Shelnutt said.

"The national economy is doing so well that all boats are rising," he said. 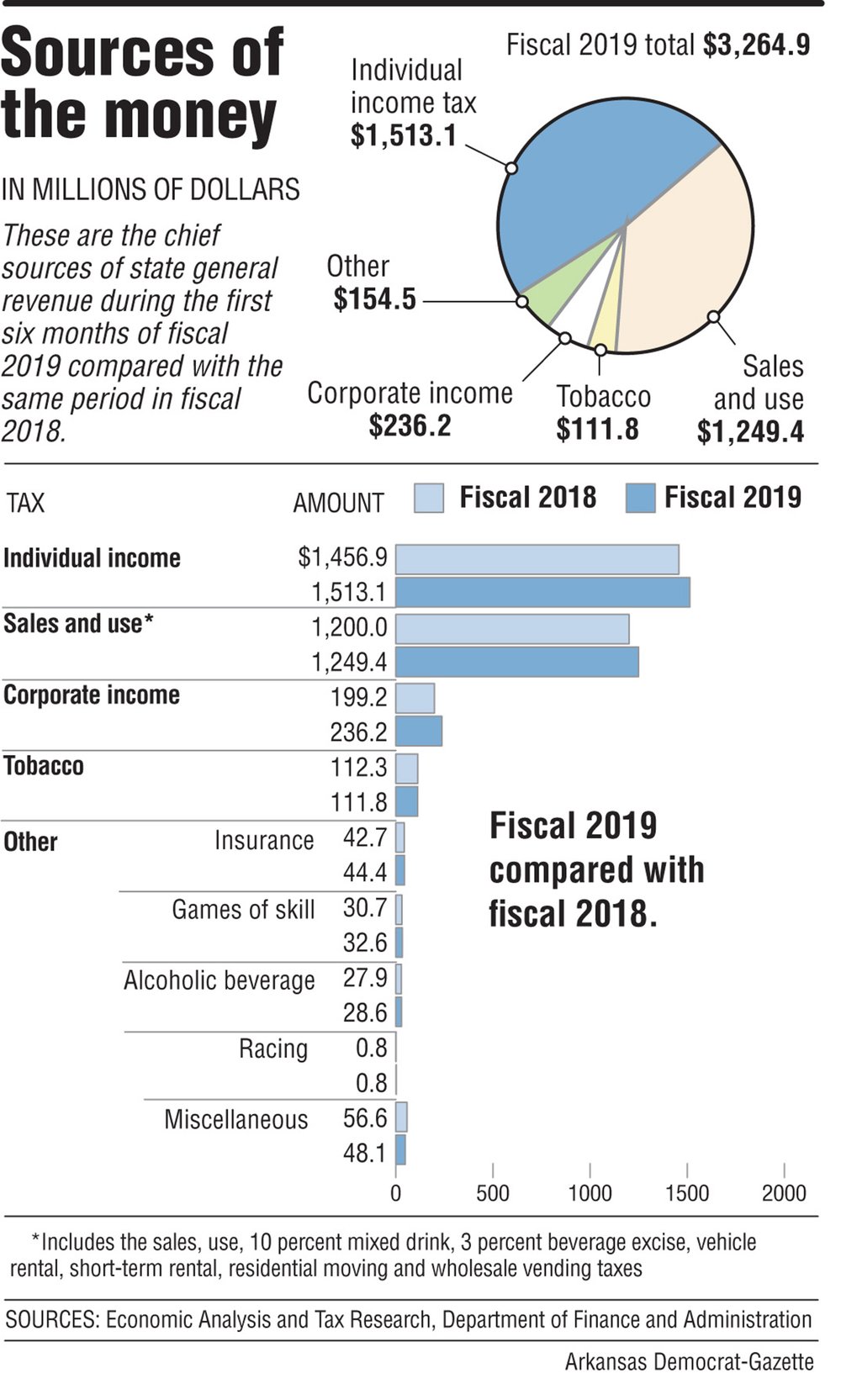 Tax refunds and some special government expenditures come off the top of total general revenue collections, leaving a net amount that state agencies are allowed to spend.

"We completed [calendar year] 2018 with the state's economy continuing to exhibit momentum," Gov. Asa Hutchinson said in a written statement.

"Reviewing the last six months of 2018, we see sales tax collection 4.1 percent above the same period in 2017. Additionally, income tax withholding was 5.5 percent higher in that same year-to-year time-frame, reflecting a strong labor market and low unemployment. While we've recently experienced several months of revenue exceeding expectations, we never take a month for granted and continue to monitor our key categories and indicators on a daily basis," the Republican governor said.

For fiscal 2020, which starts next July 1, Hutchinson in November proposed a general revenue budget totaling $5.75 billion -- a $125.2 million increase over fiscal 2019's budget, with most of the increase going to human services and education programs, including a boost in starting teacher pay.

His proposed budget factors in a $47.4 million in general revenue cut in fiscal 2020 as part of his plan to gradually cut the top individual income tax rate from 6.9 percent to 5.9 percent and simplify the tax code by reducing the number of tax tables from three to one. The plan also would increase individual income tax rates on some taxpayers, but their increased taxes would be offset by increases in the standard deductions for single and married taxpayers, according to state officials.

State officials project that the governor's plan ultimately will cut revenue by nearly $192 million a year when fully implemented.

The Legislature will consider the governor's proposed budget and tax cut plan during the regular session beginning Jan. 14.

"The revenue numbers support the balanced budget that I presented to the General Assembly, which includes teacher pay increases and tax cuts," Hutchinson said.

According to the finance department, December's general revenue collections included:

These estimated payments are usually the largest category of corporate income tax collections each month because many large firms adjust the estimated payments made quarterly in their respective payment schedule amounts rather than the once-a-year final return payment amount, Shelnutt said.

Last month, these estimated payments increased by $19.6 million over the same month a year ago to $81.4 million and exceeded forecast by $24.7 million.

"We don't have a good explanation for this beyond the observation that a number of top 50 corporations filed sizable estimated payments in December compared to low or near zero payments last year," Shelnutt said in a written statement.

"This is unique to those filers that normally file these payments in December and not a reflection of all corporate filers in the state or even among other top firms that do not file in December. Beyond that level of description, there are issues of taxpayer confidentiality," he said.

Asked whether November retailers' sales for Christmas weren't as good as expected, Shelnutt said, "We need to look at the two months together before we can answer that. We notice the year ago growth rate for sales tax is quite low because of some large [sales tax] payments" in December 2017.

Last month, sales and use tax collections from business-related sectors fell by 20.7 percent from a year ago, from $61 million to $48.4 million, according to Shelnutt.

He said he didn't have an explanation for the decline in sales-tax collections from business spending "except [that] business purchases in sales tax tend to be more volatile than the consumer sectors, especially when very large, one-time transactions are counted."

Walther said he's expecting tax collections in January based on consumer purchases made in December "to look good in the next report." 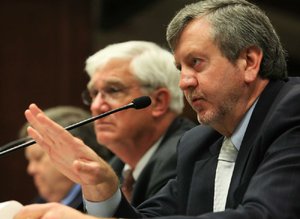 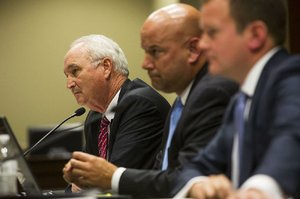