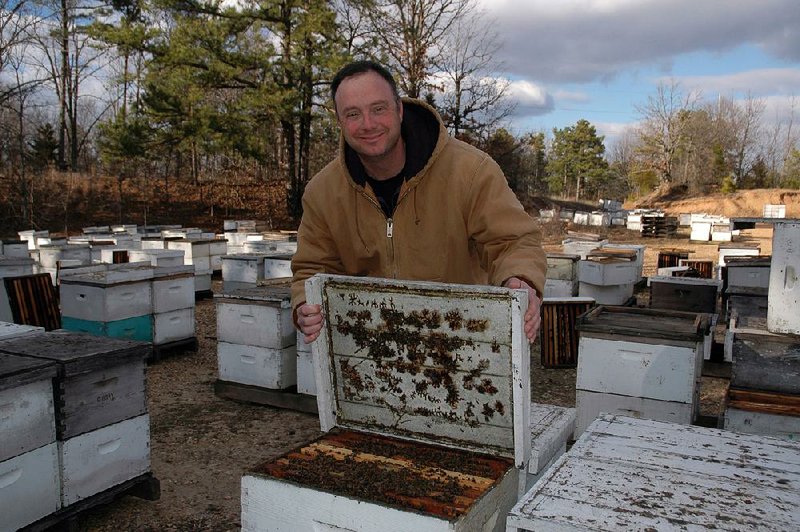 Crooked Creek Bee Co., the retail sales and processing side of Arkansas' largest commercial beekeeper, closed this week, a casualty of dicamba, Richard Coy, one of its owners, said Friday.

The herbicide has been damaging or killing vegetation essential to pollination by bees the past three years, Coy said. Redvine, a flowering plant native to Arkansas, and button willow, a tree or shrub common in wetlands, are key to the flavor of his honey and have been particularly hit hard over the past year, he said.

"The driving force behind us shutting down is the destruction of the pollinating plants that bees need," Coy said.

Dicamba is a weedkiller linked to crop and vegetation damage in Arkansas and other states in the past three years, as farmers planted soybeans and cotton genetically modified to be tolerant of the chemical. Dicamba damages other varieties of soybeans and cotton, fruits, vegetables and ornamental shrubs and bushes.

Weed scientists in Arkansas and other states say dicamba is susceptible after application to "volatilizing" as a gas and moving miles away, especially in hot and humid weather.

Arkansas had about 1,000 complaints of dicamba damage in 2017, prompting the state Plant Board to ban its use on crops after April 15 last year. Even with that cutoff date, the board received 200 complaints, leading its members to believe some farmers sprayed illegally deep into the summer.

After the federal Environmental Protection Agency announced in October that it will allow the in-crop use of dicamba through December 2020, the Plant Board recommended allowing its use this year through May 20. That recommendation, however, still must go through a 30-day period for public comment and a public hearing.

The Plant Board on Friday set the comment period to run from Monday through Feb. 5. The public hearing is set for 9 a.m. Feb. 20 at the Embassy Suites hotel in west Little Rock.

[BUSINESS IN ARKANSAS: Sign up for new weekly newsletter featuring biggest business headlines in the state]

Coy also is a co-owner of Coy's Honey Farm Inc., the state's largest commercial beekeeping operation with some 12,000 hives. He said dicamba use in Arkansas is forcing him to move those operations to southern Mississippi over the next couple of years.

"Honey production is so far down, we can't stay in operation," Coy said. "There's going to be no vegetation for bees if we keep this up. The possibility of better honey production in Arkansas the next few years is rather slim."

Healthy hives produce 100 pounds of honey a year, a threshold met for several years until 2017, Coy said, when production was cut by 30 percent in areas where dicamba was used. Production was down 50 percent in those areas last year.

Coy bought Crooked Creek about three years ago and built a processing plant near Jonesboro as it expanded into retail sales. He first announced Crooked Creek's closing on its Facebook page on New Year's Day.

Crooked Creek had five part-time employees and one full-time employee, Coy said, and averaged $450,000 in gross sales each of the past three years. It bottled and shipped its honey -- in 12-ounce jars shaped like bears and 55-pound jugs -- to more than 80 stores in the Jonesboro, Little Rock and Northwest Arkansas metropolitan areas.

"We were able to pick the best honey for retail," he said. "But when production falls, your grade of honey also falls. If we can't make honey off redvine and button willow, the rest of the vegetation produces a less desirable honey."

Trey Koger, a Mississippi crop consultant hired by the state Plant Board for a couple of weeks last summer to look at dicamba damage, said in an August report to the board that he'd found "extensive dicamba symptomology" on redvine in Lee County.

Much of Koger's work also was in Mississippi, Craighead and Poinsett counties. "The amount of dicamba injury observed in these areas was extensive and severe in some cases," he wrote, adding that Bradford pear, sycamore, peach, cypress and maple trees showed "significant" damage. Pecan and red oak trees "appear to be fairly tolerant" of dicamba, he wrote.

"Injury was also documented on virtually every broadleaf vegetable species including tomato, squash, okra, cucumbers, watermelons, and cantaloupe," Koger wrote in an October addendum to the August report.

Coy said beekeepers have faced many problems over the years, including colony collapse disorder, inclement weather that hurt honey production and drift from other farm chemicals, but have recovered.

He said dicamba could be the most serious problem that beekeepers have ever faced. "You could say dicamba was the last straw for us because we know how the product works," he said. "It can move for miles off target. It affected areas that were supposed to be safe."

The new seed varieties, however, were released before the company had gained EPA approval for a new dicamba formulation that was supposed to be less susceptible to off-target movement. Farmers in Arkansas and other states in 2016 turned to older formulations of dicamba illegal for in-crop use.

"This will lead to higher levels of non-target damage to susceptible crop plants and native, wild vegetation," David Mortensen , one of the Penn State scientists, wrote. "For susceptible crop varieties, this sort of damage could reduce yield. For non-crop plant species, this drift-induced damage could significantly decrease the pollinator and natural enemy communities that these plants can support."

Coy has since appeared at many dicamba-related meetings of the Plant Board and its pesticide committee. He has said several times that beekeepers are among the small producers of fruits, vegetables and other commodities whose interests are being overlooked in the state's dicamba debate.

Coy emphasized that dicamba is killing wild vegetation important to pollination, not the bees.

After dicamba problems in 2017, Coy moved thousands of hives from Mississippi County, which has had more dicamba complaints than any other county in the past three years -- to fields in Monroe, Prairie and Phillips counties, far from his Jonesboro base.

Last summer, Coy took Arkansas-based weed scientists, Plant Board representatives and EPA representatives into fields in Leachville, near the Missouri border, to show them dead and dying redvine, he said.

Coy has been operating for several years in southern Mississippi, which is heavy in pastureland and forests and, for the most part, lacks the row crops where dicamba is more heavily used, he said.

"Honey production down there is twice as much as in Arkansas," he said. "We have put off moving there because this is home and we wanted to stay here, but to stay in business we have to relocate."