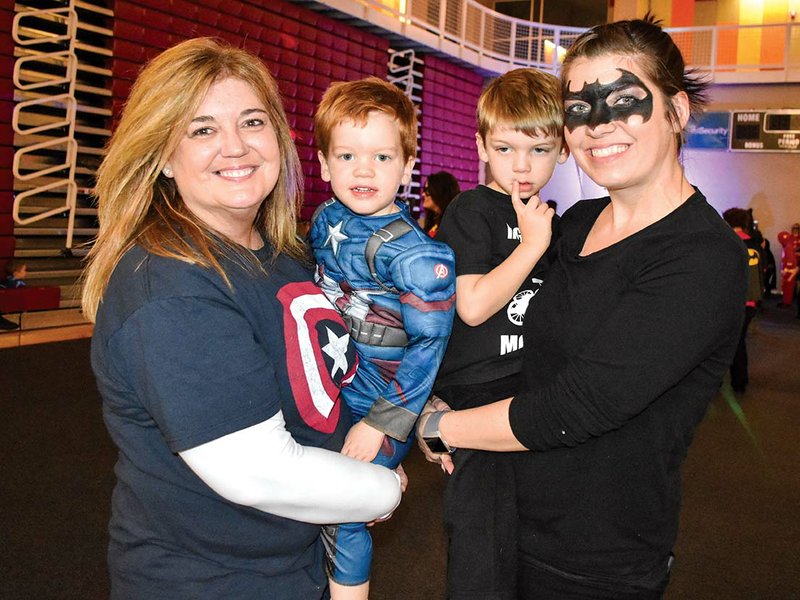 Attending last year’s Mother-Son Superhero Dance is, from left, Pamela Harbour, Jacob Milam, Gavin Milam and Gina Milam. Gina said her sons really enjoyed dressing up as their favorite superheroes and getting to meet Batman and Wonder Woman. This year’s dance is scheduled for Jan. 18.

BENTON — Gina Milam said one of the best parts of Benton’s annual Mother-Son Superhero Dance is getting “one more use out of our Halloween costumes.”

“It is fun, and my boys love to dress up,” Milam said. “I have never been to something like that. They have a big, wide-open space with plenty of room for dancing and having a great time.”

This year’s mother-son dance is scheduled for 6-8 p.m.

Jan. 18 at the River Center Gymnasium in Benton. The cost for the dance is $30 per couple, plus $7 for each additional child. The dance is open to children ages 3 to 12. The deadline for registration is Friday. Milam and her two boys, Gavin, 5, and Jacob, 4, went to the dance last year.

“It was a lot of fun for the kids,” said Milam, who works as the aquatics supervisor for the River Center. “My boys really liked seeing Batman and Wonder Woman, and they had the Batmobile parked out front.

“The music and food is always good, and all the moms get really into it. But my kids just really enjoy getting to dress up as their favorite heroes and letting loose.”

Benton Parks and Recreation Director Stephanie Jones said this is the fourth year the department has hosted a mother-son event, but this is just the third year for the superhero dance.

“The first year, we started with mother-son games,” she said. “It was more of an athletic-competition event, and a lot of the moms requested that they have a dance.

“We stuck with this, and it has continued to be very popular.”

At press time, Jones said there were 160 guests registered for the dance. Tickets can be purchased at apm.activecommunities.com/bentonrec or at the River Center Front Desk. Guests need to preregister in order for every child to receive prizes and goody bags to take home, Jones said.

“It has always been very positive,” Jones said. “If we get constructive criticism, we try to critique what we can, if it will benefit the group as a whole.

“For the most part, these dances are extremely popular. It has been a great thing for our community.”

Ashley Davis of Tull has attended the event with her son, Sam, all three years. Last year, they went with a group and dressed as the Power Rangers. Davis was the Yellow Ranger, and Sam, 6, was the Green Ranger.

“My daughter and my husband have gone to the father-daughter dance,” Davis said. “And the first time [my son and I] went, it was an opportunity for me to get away with him.

“But I think the theme of it, with it being superheroes and some of the games they had, is what brought us back. …

“… It is geared toward little boys, so he had a blast.”

She said one of Sam’s favorite parts was the villain station, where kids can use Nerf guns to shoot targets.

“I think one of the reasons this dance has been so successful is due to word of mouth, because it is such a fun event,” Davis said. “It is also one of a kind. There are not a lot of mother-son things.”

Jones said there will also be a photo booth, and light refreshments and snacks will be available.

“Not every child is into sports or games. This kind of targets a lot more people,” Jones said. “Before the River Center was built, we were having this at the Gene Moss Building, and we were selling out.

“Having it here gives us an opportunity to have more families and more kiddos.”

Jones said one of the questions they get a lot, is if someone doesn’t have a mom, can they still attend the dance?

“If you don’t have a mom, or if you have two moms or just a mother figure — like a grandma or an aunt, they are more than welcome to come,” Jones said. “We want to make sure everyone is included.

“We get a lot of questions on it because either the mom has passed or isn’t present or whatever the case may be. We have always opened our doors to people who want that experience.”

In February, there will also be a father-daughter dance Feb. 1 at the River Center Gymnasium. The cost is $30 per couple, plus $7 for each additional child. There will be a photo booth, snacks and a live DJ. Jones said it is “a fun experience for the kids and the parents and a great memory for your child.”

For more information, contact the Benton Parks and Recreation Department at (501) 776-5970.