Patricia Ann Quick, who goes by Annie, and Stormi James Chaney were united in marriage at 7 p.m. Friday, Dec. 28, at the Little Rock Club with The Rev. Shari Day of Parkview/New Hope United Methodist Church officiating

Parents of the bride are Tammy Bass Quick of Maumelle and Warren Patrick Quick of Conway. She is the granddaughter of Faye and the late Billy Bass and the late Brenda and Freddie Quick, all of Little Rock.

The couple exchanged vows under a lighted arch covered with greenery and burgundy wisteria.

Given in marriage by her parents, the bride wore a strapless ivory mermaid-style gown of Mikado silk and English net. She carried a bouquet of black magic roses and evergreens.

Perry Allison Quick of Maumelle served as her sister's maid of honor. Bridesmaids were Erin Woods and Bristol Chaney, sister of the groom, both of Little Rock; and Adrienne Merriott of Fayetteville. They wore wine-colored one-shoulder gowns with crepe bodices and matte charmeuse skirts tied with satin sashes. They carried bouquets of evergreens and dark burgundy berries.

A dinner at the Little Rock Club was held after the ceremony. Guest tables covered in gray table cloths were centered with tall lighted vases filled with arrangements of deep burgundy roses and hydrangeas.

The groom is an aviation ordnanceman in the Navy training at the Naval Air Station in Pensacola, Fla.

The couple will be stationed in Norfolk, Va. 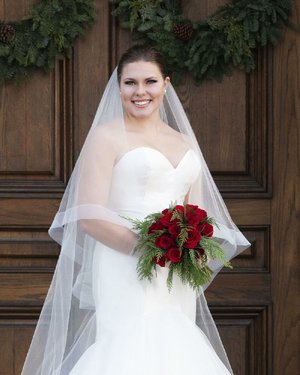