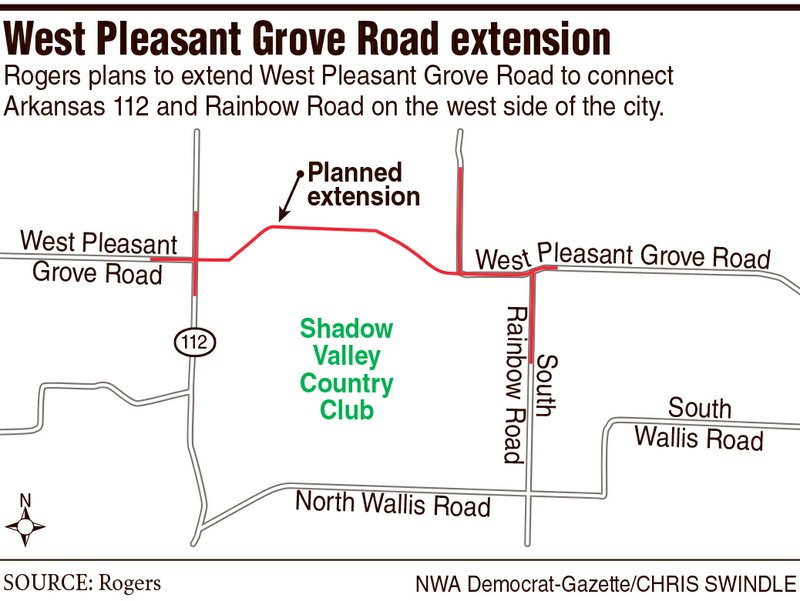 ROGERS — The city will soon begin work to extend Pleasant Grove Road, a project officials said will make it easier to get to the far western side of town.

The $11 million project will add about one mile to Pleasant Grove Road to fill in the missing chunk between Arkansas 112 and Rainbow Road to the east, engineer Lance Jobe said. A chart on the city’s website shows the project is to be completed by the end of 2020.

The extension is planned for a rural area of western Rogers where subdivisions have popped up in recent years. A 2015 study by the Arkansas Department of Transportation on Arkansas 112 improvement recommends access management, which involves entry and exit points on the highway.

The area’s poor connectivity needs to be improved, especially because of residential developments such as the Scissortail neighborhood, Jobe said.

Scissortail is a gated subdivision that began in 2015. Bob David, Scissortail co-founder, said navigating the area is a bit like navigating a maze and the Pleasant Grove extension will dramatically improve connectivity in an area expected to grow.

“That part of Rogers and Bentonville is going to explode in the next five to seven years. That’s where the residential growth is,” David said.

There are 25 houses in Scissortail and more than 30 under construction, he said.

“We are a regional economy,” he said. “People live, work, go to school and shop all through Northwest Arkansas.”

Design for the Pleasant Grove project began about a year ago, but construction has stalled.

“We have had some issues with land acquisition,” Community Development Director John McCurdy said during a recent presentation.

A couple of parcels have mobile homes on them.

Viola Burgess, 92, said she has lived in the mobile home on West Pleasant Grove Road since 1976 and has seen the area around her grow.

“I hope I can live here until I die, and then give it to my grandson,” she said.

Burgess said she was told her mobile home would need to be moved farther away from the road at no cost to her. Although she said she would rather not move the home, she would agree to do so.

When the city has to acquire land to complete a project, it works with the property owners to come to an agreement, Jobe said. The last resort is to go through the eminent domain process, he said. Jobe said the city is flexible when it comes to land acquisition and tries to avoid going the eminent domain route.

“We really want to get this right and work with those landowners to make sure that we’re taking care of them, but at the same time being good stewards of public money,” McCurdy said. “So that has slowed things down a little bit, and I’m happy to slow things down for something like that.”