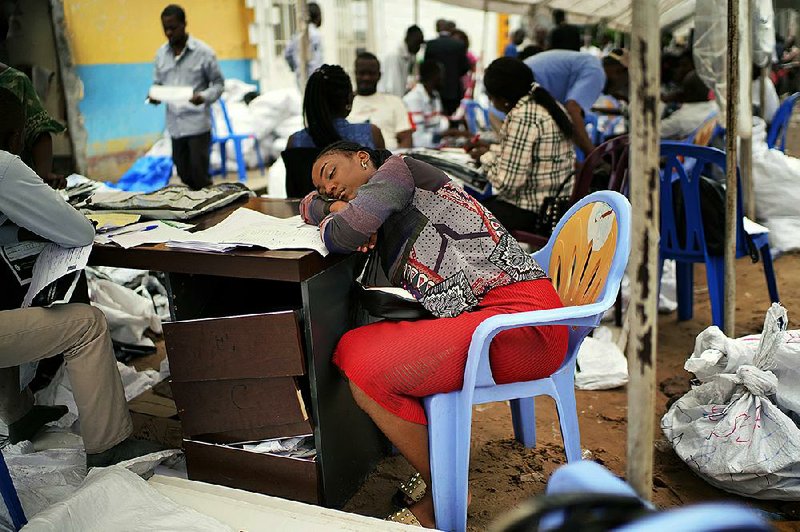 A member of the Congolese electoral commission rests Sunday as votes from the presidential race are tallied at a compilation center in Kinshasa.

No new date for announcing the winner of the Dec. 30 election was given. Electoral officials have compiled 53 percent of the votes and will not release any information until all the ballots have been tallied, said Corneille Nangaa, head of the electoral commission.

"We handle sensitive data and have to handle it responsibly," he said. He asked Congo's people to "remain patient."

"We are aware this process has always been surrounded by distrust," he said, referring to calls from the Catholic Church, the African Union, the U.S. and other diplomats for the government to announce accurate results.

The delay fuels suspicions that the election commission is compromised and using the borrowed time to rig results in favor of Kabila's chosen successor, Emmanuel Ramazani Shadary. A vote widely perceived to have been manipulated could trigger violence in Congo, which has been plagued by civil wars and insurrections for decades.

Congo voted to replace Kabila, who is stepping down after 18 years in power. Shadary is up against two main opposition candidates, Martin Fayulu and Felix Tshisekedi. The vote was initially scheduled for 2016, but Kabila repeatedly delayed it, staying on two years past his constitutionally mandated term limit.

The Catholic Church, an influential voice in this heavily Catholic nation, turned up the pressure by saying it already knows there is a clear victor, based on data compiled by the church's 40,000 election observers. Because Congo's regulations say only the electoral commission can announce election results, the church did not name the winner.

The electoral commission responded with anger to the statement from the observer mission, saying it was "likely to brainwash the population while preparing an insurrection that [the mission] alone will be responsible for."

South Africa, Russia and China expressed dismay at the observer mission's statement, saying the election commission was the only institution whose announcement would be considered official. China, a major investor in Congo, "lauded the manner in which elections were conducted," a report from the U.N. Security Council said on Saturday.

Fayulu, a former employee of the Exxon oil company who has been a member of Congo's parliament for more than a decade, told The Washington Post that his team had "extremely conclusive" evidence that he had won.

This could be Congo's first democratic, peaceful transfer of power since independence from Belgium in 1960.

For the past week, the government cut off Internet access across the vast Central African country to prevent any speculation on social media about who won. The government has also blocked transmissions from Radio France International, which was alleged to have speculated on the winner, and revoked the press credentials of its correspondent.

Election observers and the opposition have raised concerns about voting irregularities, including the government's decision to bar 1 million voters in eastern Congo from casting ballots because of what it said was the Ebola outbreak in the region. Eastern Congo is known as a center of the opposition.

The observer mission's report said that 38 percent of polling stations that it observed were missing materials at the start of election day, and that in hundreds of cases ballot boxes were not sealed before counting and polling stations did not properly verify voters' identities.

The U.S. government has been the loudest foreign voice of consternation at the vote's irregularities. A State Department spokesman urged the election commission on Friday to release accurate results and said those that prevent a fair count would be subject to U.S. sanctions.

"There are moments in every nation's history when individuals and political leaders step forward and do the right thing. This is one of those moments for the DRC [Democratic Republic of Congo]," said Robert Palladino. "Those who undermine the democratic process, threaten the peace, security or stability of the DRC, or benefit from corruption may find themselves not welcome in the United States and cut off from the U.S. financial system."

While Congo was largely calm during and after the voting, President Donald Trump said about 80 military personnel and combat equipment had been deployed to neighboring Gabon to protect American citizens and diplomatic facilities in Congo.

In a letter to congressional leaders, Trump said the troops "will remain in the region until the security situation in the Democratic Republic of the Congo becomes such that their presence is no longer needed."

Ahead of the vote, the U.S. ordered non-emergency government employees and family members to leave the country.

At stake is a vast country rich in the minerals that power the world's mobile phones and laptops, yet desperately underdeveloped. Some 40 million people were registered to vote.

Kabila, who took office in 2001 after his father was assassinated, is constitutionally barred from serving three consecutive terms but has hinted he may run again in 2023. That has led many Congolese to suspect he will rule from the shadows if Shadary takes office.

Information for this article was contributed by Mathilde Boussion and Saleh Mwanamilongo of The Associated Press; and by Max Bearak of The Washington Post.