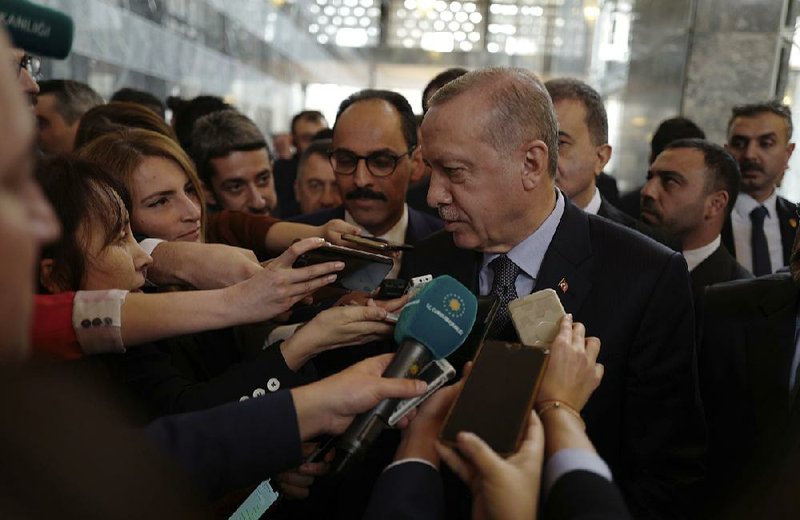 Turkish President Recep Tayyip Erdogan, speaking with reporters Tuesday in Ankara after addressing lawmakers, said a Turkish forces could move in Syria “at any moment” after talks with U.S. officials conclude. Erdogan refused to meet with national security adviser John Bolton. “It is not possible for us to swallow the message Bolton gave from Israel,” Erdogan said in his speech to Parliament.

ISTANBUL -- President Recep Tayyip Erdogan of Turkey denounced White House national security adviser John Bolton for comments he made ahead of his arrival in the Turkish capital and refused to meet him Tuesday, making any agreement between the two NATO partners over a U.S. withdrawal from Syria increasingly difficult.

Erdogan said Bolton had made a "grave mistake" when he said Turkey must agree to protect Syria's Kurds in the event of a U.S. withdrawal.

"It is not possible for us to swallow the message Bolton gave from Israel," Erdogan said in a speech to political party members in Parliament. Turkey is opposed only to Kurdish militant groups and not ordinary Kurds, he insisted.

Bolton was in Ankara, the Turkish capital, Tuesday for meetings with his national security counterpart Ibrahim Kalin but left after he was denied a meeting with Erdogan, the pro-government English-language newspaper Daily Sabah reported.

In a news briefing after Bolton's departure, Kalin said a meeting between Bolton and Erdogan had not been scheduled and had been deemed unnecessary after the national security advisers had met.

Erdogan had hailed President Donald Trump's decision to pull out of Syria as the "right call."

In an opinion piece in The New York Times, he made the case that Turkey, with the second-largest standing army in the NATO alliance, was the only country with the power and commitment to replace U.S. forces in northeastern Syria, to fight terrorism and ensure stability for the Syrian people.

An official at Tuesday's meeting between Bolton and senior Turkish officials said Bolton rebuked Erdogan's column, in which the Turkish leader restated his position that the Syrian Defense Forces were members of terrorist groups and criticized the U.S. air campaign against the Islamic State.

Bolton told Kalin that Erdogan's op-ed was "wrong and offensive," according to an official.

In Jerusalem, in addition to demanding guarantees that Turkey would not attack Kurdish forces allied with the United States, Bolton told reporters that U.S. forces would remain in Syria until the Islamic State is defeated, seemingly contradicting his boss, Trump.

"We don't think the Turks ought to undertake military action that's not fully coordinated with and agreed to by the United States, at a minimum so they don't endanger our troops," Bolton had said.

The official at Tuesday's meeting said Kalin stated that Erdogan had committed that Turkey would not take offensive action while U.S. forces were there.

In the more than two-hour meeting with Kalin, Bolton outlined five U.S. principles for the Syria drawdown, including that "the United States opposes any mistreatment of opposition forces who fought with us against ISIS."

The official added that the U.S. stuck by Trump's request that the Kurds who fought with the U.S. not be mistreated, and the Turks stuck by their position that the Kurds "are terrorist groups and they're free to go after them."

Trump abruptly announced last month that he intended to withdraw U.S. troops from Syria, and the U.S. has sent mixed signals over how soon that would be accomplished. Bolton's trip to the Mideast was aimed at assuring allies that it would not be done precipitously.

But Kalin told reporters after talks with Bolton that there is no slowdown in the timetable for U.S. withdrawal from Syria. He said U.S. officials have said during their discussions that the withdrawal could take place within "120 days."

Kalin said talks with Bolton focused on how the U.S. would collect the weapons that were given to Kurdish militia fighting the Islamic State as well as the future of U.S. bases in Syria. He said he handed over two dossiers to Bolton -- one on Turkish help to Kurdish populations in Iraq and Syria, the other on the Kurdish militias' "criminal activities and human rights violations."

Even before Bolton's comments angered Erdogan, discussions were bound to show how far apart the two sides are in their priorities in Syria, political analysts said.

The main reason that Ankara supports a withdrawal of U.S. forces, said Ozgur Unluhisarcikli, the Ankara director for the German Marshall Fund of the United States, is that it would end support for the Kurdish People's Protection Units, which Turkey regards as a terrorist group, and would deter the idea of Rojava, a Kurdish-run autonomous territory across northern Syria.

The People's Protection Units is widely seen as the Syrian franchise of the Kurdistan Workers' Party, which has been fighting an insurgency against Turkey since the 1980s and is recognized as a terrorist organization by that country, the United States and the European Union.

If it means an end to U.S. support for the Kurds in Syria, Unluhisarcikli said, Turkey is even prepared to accept an end to U.S. air space in eastern Syria and to lose NATO air and logistical support.

"If the alternative is continued cooperation with the [People's Protection Units], they would want them to leave," he said, describing Turkey's view of the U.S. presence in Syria.

Turkish officials would be likely to disabuse Washington of some of its expectations in the meetings, he added.

"America will request Turkey's further cooperation against Daesh," he said, using the Arabic acronym for the Islamic State. "I am not sure Turkey will deliver."

Turkish forces have been mustering for an operation in northeastern Syria, but the Turkish military is intent on dealing with the Kurdish militant threat and does not want to extend more than about 10 miles into Syria, Unluhisarcikli said.

The United States would like Turkey to agree not to move against the People's Protection Units and its political branch, the Democratic Union Party, in the event of a U.S. withdrawal.

"That is a hopeless cause," Unluhisarcikli said. "It is not a question of whether. Turkey will not tolerate the [Kurdistan Workers' Party] on its borders. So it is only a matter of time."

Kurdish representatives in Syria complained that U.S. officials had left them out of talks so far and expressed concern at the conflicting messaging.

"We're expecting to hear from the Americans soon, but so far they have not involved us in the talks," said Nasser Haj Mansour, a Kurdish politician and former adviser to the U.S.-backed Kurdish fighters of the Syrian Democratic Forces. "We are hoping that Turkey would avoid any military action within our borders," he said.

Newaf Khalil, head of the Europe-based Center for Kurdish Studies, warned that Turkish forces would not listen to U.S. requests not to target Kurdish fighters of the Syrian Democratic Forces.

"The U.S. is saying that the Turks won't kill the Kurds if they deploy, but definitely they will kill [Syrian Democratic Forces] fighters, their families, and many more," he said." We're talking about thousands. There's a big contradiction in the U.S. statements, and this is not acceptable."

On Tuesday, a top Syrian Kurdish official said his fighters are prepared to confront Turkish forces if they enter northeastern Syria, adding that it's clear from Ankara's latest statements that Turkey has a plan to invade the region.

Shahoz Hasan is co-chairman of the Democratic Union Party. He spoke to The Associated Press by telephone from Syria.

"We are getting ready to confront Turkish threats through resistance," he said.

Hasan said he hoped the results of Bolton's visit to Turkey will become clearer in the next few days. He said Syria's Kurds are in contact with the Russians and the Syrian government, and could strike a deal such as the one reached last month when Syrian government troops entered an area close to the northern town of Manbij that Turkey had threatened to attack.

"Until now there has been no [Turkish] military intervention, but if it happens I believe we will be ready to face it, in addition to political and diplomatic work with all sides," Hasan said.

"The Russians as well are happy about the U.S. withdrawal plan," Kalin said. Moscow wants the Syrian government to take control of northeastern Syria while Turkey was still holding out for it to be handed to local councils, he said.

"They have such an inclination, but they are not insistent on that," Kalin said of Russia. "We believe that it would be more right to do it with elements of local people."

Erdogan told reporters after his speech in Parliament that an incursion into Syria might happen "at any moment after the Bolton meetings," the news channel NTV reported. He also added that he might have a phone call with Trump.

Information for this article was contributed by Carlotta Gall of The New York Times; and by Zeke Miller, Suzan Fraser, Bassem Mroue, Robert Burns and Matthew Lee of The Associated Press. 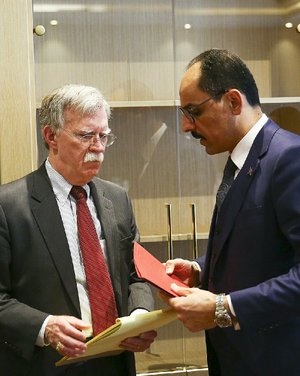