Charles Hicks gets underway on a scooter Tuesday on a sidewalk in the River Market District of Little Rock. Hicks said using a scooter to get from his office in the Stephens Building to the River Market for lunch would be handy. ( John Sykes Jr.)

The city of Little Rock has added a little Lime to the downtown experience.

Alternative transportation company Lime began a six-month pilot program with the city on Tuesday when it rolled out Lime-S e-scooters in several downtown locations.

"Around 5 a.m., we put out about 50 scooters," said Kris Alborz, a city launcher for Lime. "This weekend we plan to release around another 100."

Scooters were parked at multiple locations along Main Street early Tuesday. As many as 500 will be used throughout the downtown area in the coming months, starting with an initial deployment near and in the River Market District.

The rechargeable scooters are GPS and 3G-enabled, which means riders can use smartphones to locate, unlock and pick up a scooter. When they are finished, riders check in the scooters on the company's mobile app and park them on a street curb or a bike rack.

The scooters cost $1 to unlock and 15 cents per minute. A rider must be at least 18, have a driver's license and wear a helmet.

Alborz said riders are responsible for all liability.

Lime operates in more than 100 markets on five continents and is the largest shared bike and scooter provider in the United States. It does not provide scooters to any other Arkansas city.

"Lime is thrilled to be the first and only e-scooter provider in Little Rock," Todd O'Boyle, development director at Lime, said in a news release. "We look forward to providing residents with affordable, equitable, environmentally-friendly and safe transportation solutions to meet their needs, starting in River Market."

Former Mayor Mark Stodola announced in November that Little Rock had entered into an agreement with the company to start a pilot program. A decision on whether to extend the agreement will be based on whether people like them, Stodola said at the time.

"Right now, we are still the wild, wild West when it comes to cars and parking," Stodola said Tuesday. "This is a great opportunity to minimize congestion issues we might deal with in the future."

Several people took advantage of bright, unseasonably warm weather to zoom around on the scooters Tuesday.

"It has been a perfect day to ride scooters, so I am not surprised by the amount of people riding them around," Alborz said.

A man riding one of the e-scooters even gave Alborz a fist-bump while riding down the River Walk.

"I love these things," the man yelled as he zoomed past Alborz.

Shawn Burnett works downtown and said she is excited about the city's new addition.

"Everywhere in this area you have to pay for parking, so it can be hard to get from one side to the other, but this can change that," Burnett said.

The popularity of e-scooters operated by Lime and other similar companies has risen across the United States in recent months as a new mode of transportation and entertainment.

Scooter programs have become popular in cities such as Los Angeles, Dallas and Washington, D.C., but they aren't just limited to large metropolitan areas. Russellville and Arkansas Tech University received 175 scooters from another provider, Bird, in October.

Issues have arisen in some markets after competing companies flooded cities with the vehicles, creating a nuisance as scooters began piling up on sidewalks, in doorways and near wheelchair ramps. 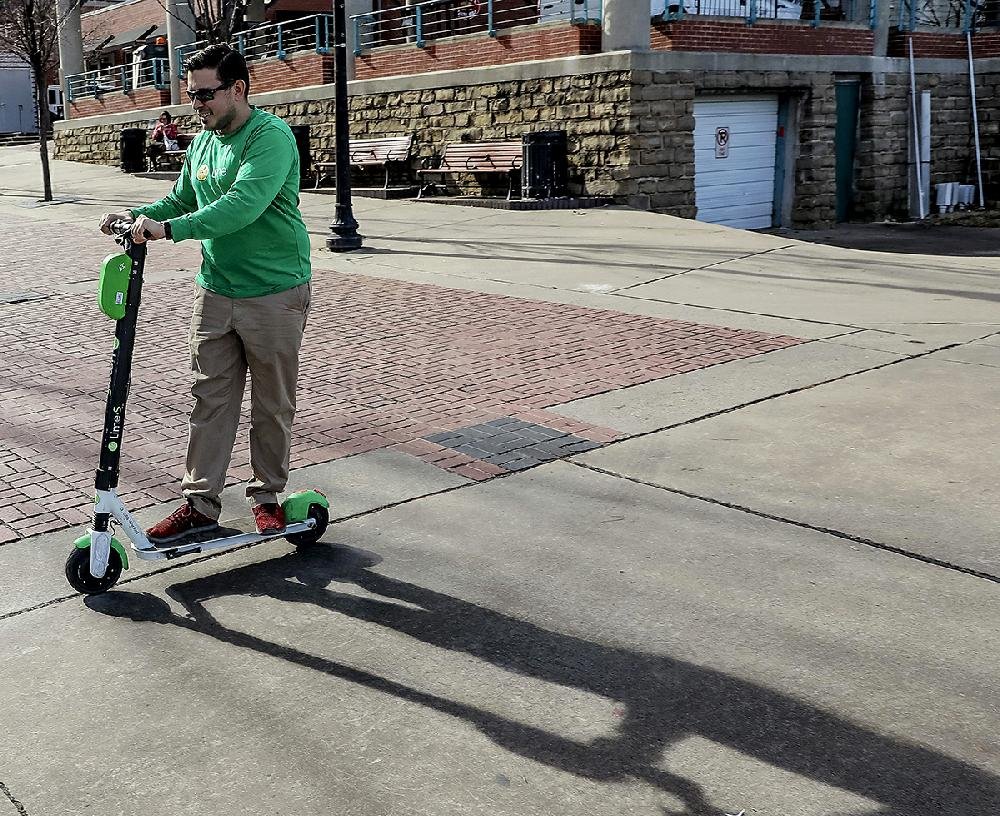 Cities such as San Francisco and Santa Monica sent cease-and-desist notices to companies. Some Californians also took to vandalizing the vehicles, even setting some on fire as a sign of protest.

Stodola said he'd heard the horror stories, but that he did his homework before deciding on a company.

"Lime is a good operator," the former mayor said Tuesday. "I talked to them about the rules and what we wanted, and they agreed with the progressive and slow introduction. Many cities have seen success with this, as well."

Scooters can be ridden on sidewalks and river trails but are not allowed in the streets, according to Little Rock police.

"Little Rock City Ordinance 32-463 prohibits this type of transport on the road," Interim Police Chief Alice Faulk said in a memorandum sent to officers. "At this time, the scooters will only be ridden on sidewalks and River Trails where the trails are not part of a street."

Faulk said if an officer encounters a Lime scooter being ridden on the street, the officer should make the rider aware of the city ordinance and get the rider back on a sidewalk.

"Due to confusion with the app, we had a few in the street today," Ragan said. "Right now, the app says the scooters are supposed to driven in the road."

Police spokesman Lt. Michael Ford said the department is working with Lime to address the issue.