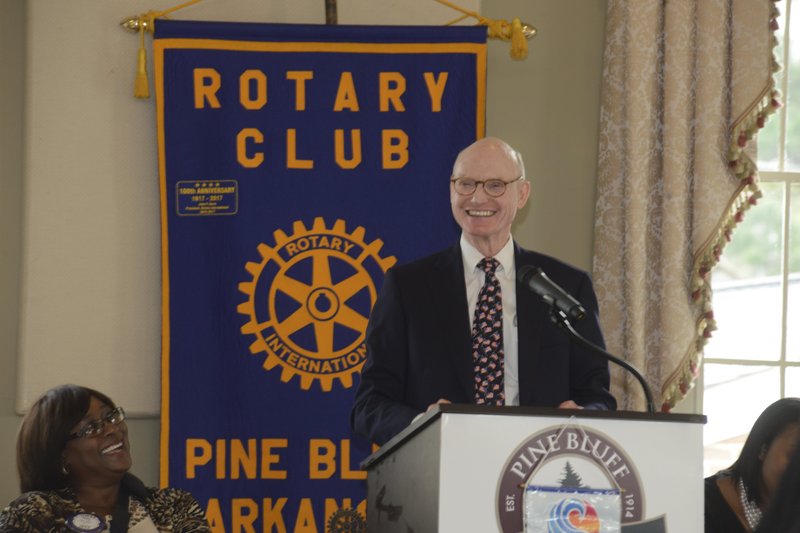 PINE BLUFF -- In what began last March as an experimental program in the farthermost reaches of the state, the Arkansas Democrat-Gazette is beginning to see promise of success, the newspaper's publisher, Walter Hussman, said Tuesday.

Home delivery of the newspaper in Mississippi County, in the state's northeast corner, became too costly more than a year ago, Hussman told a gathering of about 30 people at a Pine Bluff Rotary Club meeting Tuesday.

So the Democrat-Gazette offered to provide each subscriber in the county an Apple iPad tablet computer to download a digital replica of each day's printed edition if the subscribers would continue to pay their existing bills.

The iPad program is doing very well, Hussman said. The Democrat-Gazette has introduced the program in 25 counties, with Jefferson and Lincoln counties being the 26th and 27th, Hussman said.

The newspaper will continue the program, Hussman said.

"They did it in a big way in the very early days of iPads and other tablets," Edmonds said. "They generally have found it to be pretty successful, or so they say. But there has not been industrywide a whole lot of interest in that."

The reason, Edmonds said, is that the popularity of iPads and other similar technologies was very strong for a while before leveling off.

"But sometimes there are ideas that don't get widespread adoption and then as time goes on there comes a better time to introduce them," Edmonds said.

The iPad program has been successful, but it hasn't been without challenges, Hussman said.

Hussman mentioned a 93-year-old subscriber in Blytheville who had been reading the newspaper for 60 years. He was willing to try out the iPad even though he was completely unfamiliar with it.

The reader attended a training session and learned how to use the iPad, Hussman said.

But the reader called the next day with a problem.

"It worked for me yesterday at the Holiday Inn, but I can't get it to work here at home," the reader told one of the trainers.

The Democrat-Gazette trainers went to the man's house to figure out the trouble.

"The man didn't have an Internet connection at his house," Hussman said.

At the meeting, Hussman introduced Dale Ellis, who was recently hired as the full-time Pine Bluff reporter for the Democrat-Gazette.

Ellis is a veteran journalist with experience as a newspaper managing editor in Searcy and Wynne, and in radio, television and freelance writing and photography. He also worked in state government for eight years.