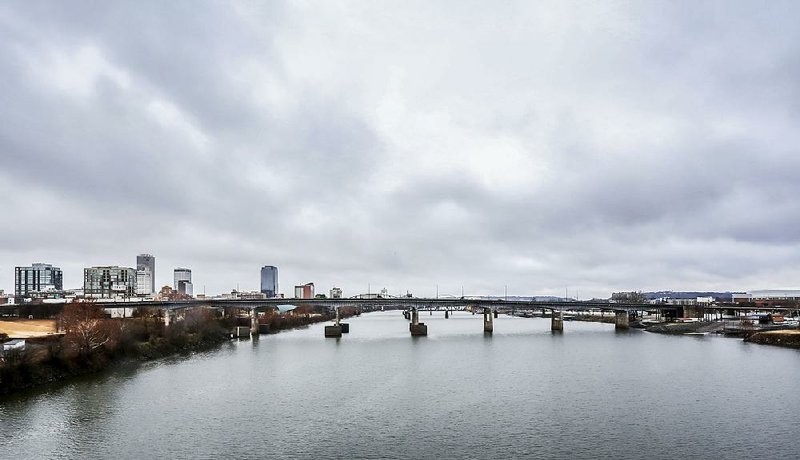 Arkansas Democrat-Gazette/JOHN SYKES JR. - I-30 Bridge connecting the cities of Little Rock and North Little Rock over the Arkansas River.

The team that was selected by the Arkansas Highway Commission on Wednesday to provide the final design and build 30 Crossing, a project to improve a 6.7-mile interstate corridor through downtown Little Rock and North Little Rock, put the price tag on all of the work that officials wanted at nearly $1 billion.

Kiewit-Massman Constructors, a joint venture, said that with the money that the Arkansas Department of Transportation has available now for construction -- $535 million -- the scope of the work would be less than the agency had envisioned.

Working within the department budget, the team said it could replace the Interstate 30 bridge over the Arkansas River, improve the downtown interchanges on both sides of the river, add lanes on the bridge and its approaches, and do some other work.

"This is design-build to a budget," Scott Bennett, the department director, told the commission. "We have everything we want to do, but we've got a budget. What they submitted, to do everything was beyond the budget we had available. And with the money we have available, they said here is what can be done."

But under the agreement that the commission approved, the joint venture and agency personnel will spend up to six months working on finding ways to complete additional work within the amount of money available.

"What we're hoping -- and it'll happen -- the scope will be beyond this," Bennett said. "Will it do everything? It's probably not going to do everything."

The numbers were the first look at how much of the project the department might be able to complete with the money it has available. The total amount, $631.7 million, includes money for preliminary design, acquiring rights of way and environmental assessment costs.

Ben Browning, a senior department official helping guide the project, expressed confidence that the scope of the work that can be completed within the $535 million available will be expanded during the discussions between the contractor and agency officials.

"We believe we can add a significant amount of scope," he said.

In design-build, contractors and designers collaborate as a team to engineer and construct projects. Proponents say design-build can speed completion of complex projects, such as 30 Crossing, at less expense than the traditional way such projects are contracted, which is to design it first and then award the construction contract to the lowest responsible bidder.

The project is the first time the department has used design-build, which is common on large projects in the construction industry.

Dick Trammel of Rogers, the commission chairman presiding over his last meeting at the end of his 10-year term, asked for a motion to approve the staff recommendation to select the Kiewit-Massman team.

Tom Shueck, a commission member from Little Rock, made the motion, which was seconded by Robert Moore Jr. of Arkansas City. Commission members Alec Farmer of Jonesboro and Philip Taldo of Springdale joined in the vote to approve the motion.

Keith Gibson, a Fort Smith businessman whom Gov. Asa Hutchinson appointed last week to replace Trammel, was among those in the audience at Wednesday's commission meeting in Little Rock.

Shueck, who owns a steel company that often participates in design-build projects, said he has been pleased with the process so far.

"It's just another step toward moving into construction," he said. "It's a smart way of contracting. I think we have a good contractor team, and I think that between the department and Kiewit, which has done a number of design-build projects similar to this, they will be able to reduce the cost and we will be able to add some mileage."

The program -- largely financed by a half-percent increase in the statewide sales tax that's in place for 10 years after voters approved it in 2012 -- focuses on nearly three dozen regionally significant projects on 19 corridors around the state. Altogether, they account for nearly 190 miles. The state highway system totals 16,000 miles.

Eight projects worth an estimated $817 million and encompassing 50 miles, which includes 30 Crossing, are expected to be awarded contracts or go to construction this year.

A lawsuit challenging some of the projects on which Connecting Arkansas Program money has been spent, including 30 Crossing, is pending in Pulaski County Circuit Court.

Five Arkansas residents sued the Highway Department, the highway commission and other state officials contending that a "plain" reading of the Amendment 91, which authorized the half-percent increase in the statewide sales tax, limits work to highways of no more than four lanes.

The initial projection in 2013 for the cost of construction for 30 Crossing was $325 million. Agency officials also initially had anticipated construction beginning nearly a year ago.

"The cost has gone up because this development has lasted longer than we had anticipated," Bennett said. "We had to go in and analyze an eight-lane alternative in detail, which put everything off.

"I think a lot of what's happened is there is a lot of risk built into this, and we can work through with one design-build team to eliminate some of the risk and lower some of the costs."

The department always said the project was among its most complex, beginning with its location in a heavily developed urban area. The corridor and the bridge, which carries 125,000 vehicles daily, were built nearly 60 years ago.

The other team that submitted a proposal for the project -- a joint venture between Granite Construction Co. of Watsonville, Calif., and Traylor Brothers Inc. of Evansville, Ind. -- said its price tag to complete the design and build the project was almost $1.1 billion.

A department review committee found its design lacking, with Bennett noting that it wouldn't replace the entire bridge and would only widen Interstate 30 eastbound while reconstructing the existing westbound lanes.

"It was a little bit of widening in one direction and not the other," he said. "Their ultimate costs were higher."

A third team that was shortlisted in October 2017 was led by Ferrovial Agroman US Corp. of Austin, Texas, the American subsidiary of Madrid-based Ferrovial. It didn't submit a proposal.

"The Spanish firm chose not to submit a proposal because ... they had some other big work going on and didn't feel like it was in their best interest to submit," Bennett said.

Both Kiewit Infrastructure South Co. of Fort Worth and Massman Construction Co. of Kansas City, Mo., are contractors with experience in Arkansas.

Massman was the lead contractor on the $98.6 million project to replace the Broadway Bridge, which also crosses the Arkansas River between Little Rock's and North Little Rock's downtowns and is just upriver from the I-30 bridge.

The project required the old bridge to be closed to traffic and removed and a new one built in its place, all within six months. Massman opened the new bridge about a month ahead of schedule.

Kiewit has won contracts on several high-profile Arkansas highway projects over the years.

Most recently, it became the contractor for a project to improve the interchange at Cantrell Road and Interstate 430 in west Little Rock, the busiest non-interstate interchange in the state. Work is scheduled to begin this summer. 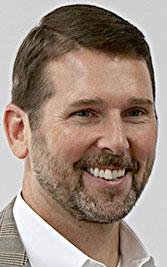 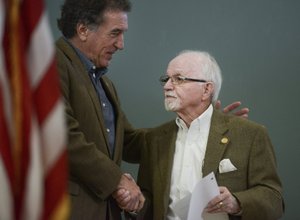