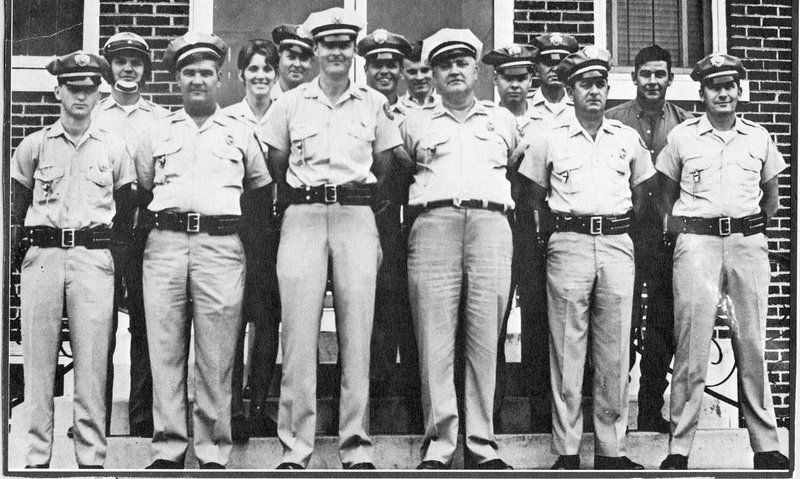 When Rogers was established in 1881, it became necessary to have an officer to enforce the new laws of the city. The first officer was town marshal Robert Sikes, nephew of the first mayor -- and Sikes immediately had his first challenge.

That fall, the first circus to visit Benton County came to Rogers, and the novelty of the event brought a large crowd from far and wide. Unfortunately, some of the crowd got out of hand. It seems that there were so many drunks that the town's calaboose was filled, and the Frisco railroad loaned the new town two boxcars for use as jails.

Also, that year the first murder took place when Mary Bolin was charged with shooting her husband in the back of the head on Christmas Eve. She committed suicide in jail while awaiting trial.

By 1894, Rogers needed a permanent place to lock up miscreants and lawbreakers, so the city ordered two jail cells from the Pauly Jail Building Co. in St. Louis, Mo. (This company still exists and manufactures jails today). The jail consisted of an iron barred cage approximately 6 ½ feet wide by 9 feet long and 6 ½ feet high, divided down the center into two tiny cells, each with two iron bunks. The city paid $210.80 for the jail, $19.20 for shipping and $8.75 labor for setup. This proved a wise investment, for the jail served for 85 years until the cages were replaced by concrete cells in 1979. These jail cells were recovered and restored in 2011 courtesy of museum commissioner Jerry Hiett and John Burroughs, former director of the Rogers Historical Museum, and can be seen today at the new museum location in the restored 1947 Hailey Ford Building on South Second Street.

Early crimes included violations of liquor laws, assault and battery, manslaughter, grand larceny, wearing weapons and the theft of livestock. In 1900, so many people illegally fished with dynamite that local officials were worried that the fish population in the White River would be depleted. Dynamite was also popular with thieves in the attempted robbery of local businesses and banks. On two occasions, too much dynamite was used to blast open a safe, and the resulting explosion killed the perpetrators.

In 1904, the law in Rogers was enforced by one town constable or city marshal, who was paid by voluntary donations from the merchants. In one month, only $28 was raised, and the marshal quit in disgust. He took a better paying job as a carpenter. J.L. Shinpaugh was the City Marshal in 1906-07 and 1910-11 and was the first town lawman to wear an official uniform.

The national prohibition against liquor in 1919 created new challenges for law enforcement. Bootleggers could make $80 to $90 per week at a time when many people only earned $1 per day. Rogers and county lawmen were kept busy busting up illegal stills.

In 1923, Rogers hired its first full-time paid firefighter, Frank Jacobs. His initial salary was $70 per month, and his duties alternated between manning the fire department and working as a motorcycle cop. The year after Jacobs was hired, Rogers paved its streets and put up stop signs. The citizens of Rogers had a hard time observing the new stop signs, and Jacobs wrote traffic violation tickets three days a week.

In 1944, the City of Rogers changed the title of city marshal to chief of police. Walter Dean, who served the community between 1930 and 1953, was the first peace officer in Rogers to officially hold this title.

One of the most noteworthy of the Rogers Police Chiefs was Joe Means. Means once described himself as the "meanest man" in Benton County. However, this notion does not necessarily do justice to his colorful history or his service to the citizens of our area. As he said in an interview with the Rogers Historical Museum in 1990, "I did a little of everything, in the law and out of the law."

His grandfather originally came from Spring Valley and homesteaded at War Eagle in the late 1880s. The Means family farmed and operated saw mills, which reflected their heritage as descendants of the well-known Blackburn lumber family. Means was born on Aug. 7, 1916, in War Eagle and recalled walking to Rogers, crossing the White River where Horseshoe Bend Park is today, walking through Monte Ne and into Rogers. In his youth, Means worked on his family farm, spent time hunting and fishing, and even caddied at the Eden's Bluff golf course near Monte Ne. This particular job, he recalled, paid "25 cents for carrying that sack around nine greens with them."

Means attended school first at Oak Grove and then later at Monte Ne. He joked that he "went through school -- in the front door and out the back!" By the time he reached 16 years of age, his outlaw reputation began to take shape. He never identified himself as a bootlegger but rather as a wholesaler. A wholesaler produced and sold whiskey to bootleggers, who then sold it to the public. In 1933-34, Means typically hauled 50 gallons of whiskey to a Fayetteville man every week, who then distributed it in Rogers, Springdale and Fayetteville. This activity usually netted at least $1.50 per gallon of whisky delivered, which was a sizable sum of money at that time. Mean Joe Means recalled in a Rogers Morning News article that "in Rogers, there were so many bootleggers, you had to wear a name badge to keep from selling to each other." By 1937, he stopped making illegal whiskey and settled down to run his saw mill operations. He was persuaded by friends to run and was elected sheriff of Benton County in 1954. In 1958, Means' term of office ended, and in 1962 he was hired as the Rogers police chief. He was a highly respected law enforcement officer and businessman until his death in 2005.

I asked for memories of the police department on a popular Rogers Facebook site and received lots of responses -- most from prominent citizens as teenagers having mischievous run-ins with the police. One of the funniest is recalled by former Mayor John Sampier: "One hot summer night in early July about 1964, some mischievous teenagers slipped up in the dark and put a cherry bomb in the cannon in front of the City Hall/Police Station and observed from the dark in the Methodist Church parking lot. Unexpectedly, Quandt Morrison (chief) wandered out of the police station, stretched, and just looked around, enjoying the evening. When that cherry bomb touched off, Quandt was briefly airborne, slapping at his pistol. The juvenile delinquents silently slipped away, muffled laughing with hands over mouths. I, of course, have no idea who they were."