Ben Is Back is this season's second opioid disaster movie, after Beautiful Boy, the Steve Carell/Timothy Chalamet drama that opened a couple of months ago. At first glance these movies might seem remarkably similar -- they're both about middle-class white boys who've screwed themselves up with drugs and their parents' broken-hearted frustration as they attempt to rescue their sons.

Rating: R, for language throughout and some drug use

There are some differences; Beautiful Boy unfolds in Southern California, over the course of a few years. Ben Is Back is set in New York state, and it takes place over one wild Christmas Eve/Christmas morning. Beautiful Boy is a about a father's drawn-out struggle to come to grips with his son's addiction; Ben Is Back about a mother's fierce battle.

Both of them treat the drugs as monsters, as a malevolent presence that has colonized the precious boys they still love. Both of the families depicted in these films have some wherewithal, which makes them different from many of the people who become addicted to drugs in this country, but it is, after all, the movie business, and people are probably more likely to buy tickets for and give awards to movies that depict "relatable characters." There is not much of an audience for movies about people most of us would cross the street to avoid.

That's not to suggest there aren't a lot of people in this country like Ben, Lucas Hedges' privileged junkie. (Beautiful Boy is based on a true story -- both the father and the son survived to write books about the experience.) There are, and if you're the sort of person who goes to movies and reads movie reviews, you probably know of a few of them. It just seems worth pointing out that most Oxycontin abusers don't have nice family homes in leafy suburbs to fall back on.

Ben Is Back recognizes this; and it forces its protagonist Holly (Julia Roberts, terrific in a role that could have seemed ridiculous) to confront the seedier side of the using life -- to look hard at the easily ignorable ugliness of her pretty little bedroom community. In the process, she gets to tell a lot of people off -- which is always enjoyable -- and look worried a lot, which she also does very well. It's tempting to say that Ben Is Back is a silly movie saved by a great performance, though it might be truer to say that not even Roberts' heroics are enough. She's worth watching. Ben Is Back isn't.

But it has its good points.

When Ben unexpectedly turns up at home on Christmas Eve, everyone senses the wrongness of it. He's supposed to be in rehab. He says his sponsor gave him the OK to go home because he was doing so well. His stepfather (a very good Courtney B. Vance) notes that if Ben were black, he'd already be incarcerated. His pragmatic sister Ivy (Kathryn Newton) recognizes him as the untrustworthy thief and liar he has become. Even Holly is suspicious, though she wants to believe in him and worries that signaling her distrust might inflict addition emotional harm.

So, like most coddled, manipulative teens, Ben gets his way. He can stay for Christmas. But he can't use. And he has to pass this drug test right now ....

OK, it doesn't take long for the movie to settle into a predictable pattern. Ben wants to do something, Holly is dubious but relents. Is he scoring, or planning to score? Is he being corrupted by the girl at the Narcotics Anonymous meeting or is he corrupting her? Or is he doing what he claims he's doing and talking her out of scoring? How much room can a mother give him?

Some of Ben's old drug buddies notice he's back in town and -- while the family is away at the big Christmas pageant that Ivy and Holly's children from her second marriage are in -- kidnap the family dog. Seriously. The dog that once saved Ben's life when he overdosed. The dog that Ben's younger half-siblings cherish.

So Holly and Ben embark on a hero quest and the whole movie pretty much falls apart. Repeatedly Ben takes his mother to places no son should ever take his mother. Repeatedly he tells her to stay in the car because she doesn't want to see what he has to do, or to imagine what he has done, in these places before.

In short, the movie devolves into a ticking clock thriller, with Ben determined to get the dog home before Christmas morning. Naturally he becomes separated from his mother, who never gives up on him, imagining that his very life is at stake.

Which, of course it is, though by the time we get to the third act, we're far too aware of the movieness of the production to care much. Ben's drug addiction is just another kind of wound the hero must confront and overcome -- another crayon in the screenwriter's box.

Ben Is Back is watchable enough, thanks mostly to the performances of Roberts and Hedges, but it feels like a missed opportunity to explore a real and terrible zombie apocalypse, one that most Americans might recognize as a plausible horror. 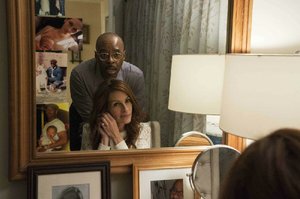 Neal (Courtney B. Vance) is supportive of his wife, Holly (Julia Roberts), but understands that if his drug addict stepson Ben were black he’d more likely be in prison than rehab in Ben Is Back.

Holly (Julia Roberts) doesn’t quite know how to take the surprise appearance of her recovering drug addict son Ben (Lucas Hedges) in Ben Is Back, directed by Hedges’ real-life father, Peter.

Print Headline: Ben Is Back