Meeting on Arkansas casino rules gets a crowd 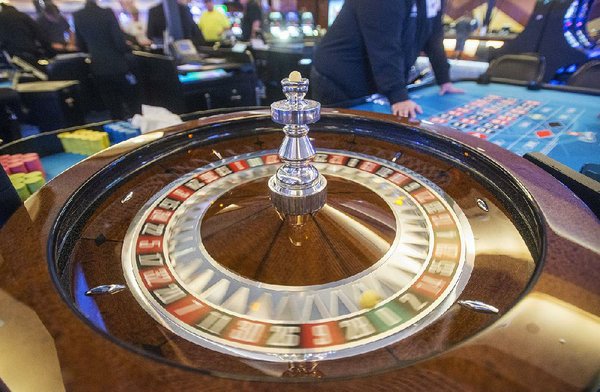 A roulette wheel spins at Cherokee Casino & Hotel in West Siloam Springs, Okla., on August 23. Some Oklahoma casinos have been granted permission to install “ball and dice” games including roulette and craps.

The timing of support by local officials for proposed casinos was debated Thursday by speakers before the Arkansas Racing Commission, which then moved forward with the next step of the state's process for making official the proposed rules on licensing and running the gambling facilities.

It was standing-room only in the 100-person capacity conference area where the commission met in a building near the state Capitol. Nearly a dozen people stood to voice their opinion about the most recent 340-page draft of the proposed rules, which were copied liberally from Nevada's gambling statutes and regulations. The proposed rules will be published for public vetting and comment, the commission voted Thursday.

The commission has until March 14 to have the rules in place, according to constitutional Amendment 100, which authorized placing casinos in Jefferson and Pope counties as well as alongside existing gambling facilities at the racetracks in Hot Springs and West Memphis. Voters in the state overwhelmingly approved the measure in the November general election.

The Racing Commission -- which is under the state Department of Finance and Administration and will oversee the casino licensing and operation -- is required to advertise the proposed rules in a statewide newspaper for three days and allow a 30-day public comment period. Comments can be written, emailed or made in person at a Feb. 21 public hearing.

"Everybody will be given a chance to speak," said Byron Freeland, an attorney for the commission. He added that the cutoff for written comment will likely be Feb. 15, the Friday before the public meeting.

"We expect to get more comments than we normally do," he said. The rules also must get legislative approval.

Ongoing controversy and a lawsuit were generated last month when the then-county judge of Pope County, Jim Ed Gibson, and then-Russellville Mayor Randy Horton submitted letters to the Racing Commission endorsing a proposal from Gulfside Partnership to build a 600-room, $254 million hotel and casino in Russellville. Gulfside operates a casino in Gulfport, Miss. The actions came days before the end of Gibson's and Horton's terms in office.

The amendment states that the casinos in Pope and Jefferson counties must include letters of support from either the county judge or the Quorum Court. If the casino is to be built within city limits in those counties, it also must have the mayor's support.

Pope County voters rejected the statewide measure in November and also passed a local ordinance that would require the county judge or the Quorum Court to get the permission of voters in a local election before supporting a casino.

Most of Thursday's public speakers -- including newly elected Pope County Judge Ben Cross as well as current Russellville Mayor Richard Harris -- expressed their support for a change made last week by the commission to the proposed rules. The change requires that the letters of support come only from current office holders and only when accompanied by a casino license application.

No applications can be submitted until after the rules are in place and the commission announces a 30-day submission timeline, Freeland said.

Cross -- who has declined to state his personal stance on the casino issue and only has said that he is "supporting the will of the voters" -- told the commission that the proposed rule change "promotes transparency going forward."

"This is a good step by members of the commission," he said. "It certainly makes my position much more transparent."

Rep. Joe Cloud, R-Russellville, echoed Cross' sentiments and said there was "probably going to be some legal wrangling in the future."

Harris -- who took the Russellville's mayor seat in a December runoff against Horton and ran his campaign on the anti-casino platform -- told the commission that the process should be as open as possible.

"There's a level of confidence that I believe the citizens should be allowed to have in the process," Harris said. "I support the wording change and ask that you go forward with that at this time."

Rep. Vivian Flowers, D-Pine Bluff, told the commission that the previous letters of support from local officials were "exclusive" to specific casinos. The Saracen Casino Resort in Pine Bluff is being planned by the development arm of the Quapaw Nation.

"This is supposed to be a competitive process," Flowers said. "If there is a letter of exclusive support provided to you prior to even having an application submitted, it muddies the process."

Alex Gray, an attorney who helped draft Amendment 100 for the Driving Arkansas Forward ballot committee, pointed out that the commission at its Dec. 26 meeting unanimously approved a rule that those letters from local leaders should be dated after Nov. 14, the effective date of the amendment.

Freeland told an Arkansas Democrat-Gazette reporter after that meeting that a Nov. 19 letter from Jefferson County's then-County Judge Booker Clemons endorsing the proposed Pine Bluff casino would satisfy the requirement for local support.

He suggested that the commission let stand the endorsement letters already submitted and add a single line to the proposed draft rules requiring "at least one letter or resolution of support" by the county judge, Quorum Court, or mayor holding office at the time of the application submission.

Casey Castleberry, Gulfside's attorney, told the commission that Gibson, then the county judge of Pope County, submitted his endorsement only two days after the Dec. 26 meeting in which the commission accepted Clemons' letter. Furthermore, Castleberry said, the proposed rules undermine the intent of the constitutional amendment.

When later asked if Gulfside would consider legal action if the original endorsement letters were not accepted, Castleberry emailed a statement saying, "As reiterated by recent court filings, Judge Gibson's letter was intended as a letter of support. Gulfside will continue to comply with all requirements of Amendment 100 and, if needed, will seek judicial review of the change in proposed rules."

The Cherokee Nation also expressed interest in vying for the Pope County casino license. When contacted Thursday, spokesman Amanda Clinton said the tribe will go forward when the application submission window opens up.

"Our level of interest in pursuing a license in Pope County has not changed or wavered in any way throughout this level of process," Clinton said.

On Feb. 21, the Racing Commission can vote to adopt, modify or reject the proposed rules, Freeland said. The document will then be sent to a legislative committee for approval.

Freeland said he's hoping the process will be completed by March 14, which is the required 120 days from the Nov. 14 effective date of Amendment 100.

Freeland also reviewed the rules for off-site sports wagering. The proposed draft of rules state that wagers will not be accepted from any person who is not physically present on the licensee's premises. The exception, Freeland said, is betting electronically on horse and greyhound racing.

Oaklawn accepts off-premises betting using the "Oaklawn Anywhere" online application, while Southland does not have a specific application designed for off-site wagers.

Print Headline: Meeting on Arkansas casino rules gets a crowd