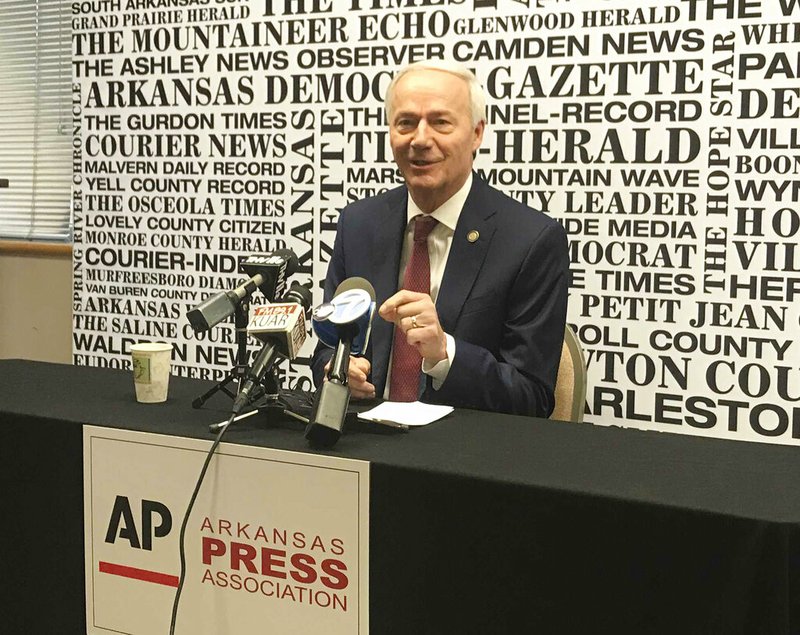 Gov. Asa Hutchinson on Friday praised President Donald Trump for spotlighting the "humanitarian crisis" at the southern U.S. border, and the governor said the partial federal government shutdown has, thus far, had a minimal impact on Arkansas.

But, speaking with reporters in advance of the legislative session that begins Monday, the Republican governor also said that Trump should be cautious about usurping Congress to fund the construction of a border wall, calling such a maneuver a last resort.

Hutchinson, the former U.S. Department of Homeland Security undersecretary for border and transportation security, emphasized the plight of children being trafficked across the southern border.

"Whenever you look at border security, I do believe the president has done an amazing job, an important job in educating Americans about the humanitarian crisis and the need for enhanced border security," Hutchinson said. "We preached that message in 2003 when I was at Homeland Security, but what the president has done is raise that knowledge level and interest of the American public to a much higher level. So that's been a very positive impact."

The federal government partially shut down on Dec. 22 because of an impasse between Congress and the White House over funding for border security. Federal workers around the country have been furloughed or are working without pay.

Many federal agencies -- such as the U.S. Department of Defense and the Social Security Administration -- already had their appropriations approved and they remain operating. However, Homeland Security, the State Department, the Agriculture Department and others don't have appropriations.

In Arkansas, Hutchinson said only 10 employees at the state Department of Finance and Administration who deal with federal funds were furloughed. Additionally, seven state Crime Laboratory employees were furloughed earlier in the shutdown. All 17 have since returned to work.

"Furloughs and reductions in force would be a last resort for the agency, as we should be able to shift affected employees to job duties in other federally funded programs, if needed," Manley said. "We'll continue to monitor operations and staff assignments as the situation progresses and more information becomes available."

The governor said that if the shutdown drags on, the state is open to stepping in and covering "federal gaps" in Arkansas on an emergency basis. Those funds, Hutchinson hopes, would be able to be recouped when the government reopens.

He said, for example, that some shelters for victims of domestic violence have watched their funding be jeopardized, and the state could look for way to keep those shelters operable.

Hutchinson added that he'd been in touch with Arkansas' congressional delegation. He said he agreed with the approach by U.S. Sens. Tom Cotton and John Boozman to a border security compromise. The governor cited a story Friday in the Arkansas Democrat-Gazette outlining the senators' support for an expansion of the E-Verify program.

The E-Verify system allows employers to determine if a job applicant is eligible to work in the U.S., but all employers aren't required to use the system.

"To a certain extent, everyone agrees -- Democrats and Republicans -- we need to enhance border security," Hutchinson said. "And so we're arguing about what the investment should be. ... You're arguing over $5 billion, you take part of it and put into the E-Verify system and part of it into a border wall to move forward on the president's priority. Then this looks like where parties can agree and get the government open. But this is what happens whenever both sides draw lines in the sand and they make statements that seem to be irrevocable. It makes it harder for the parties to get together."