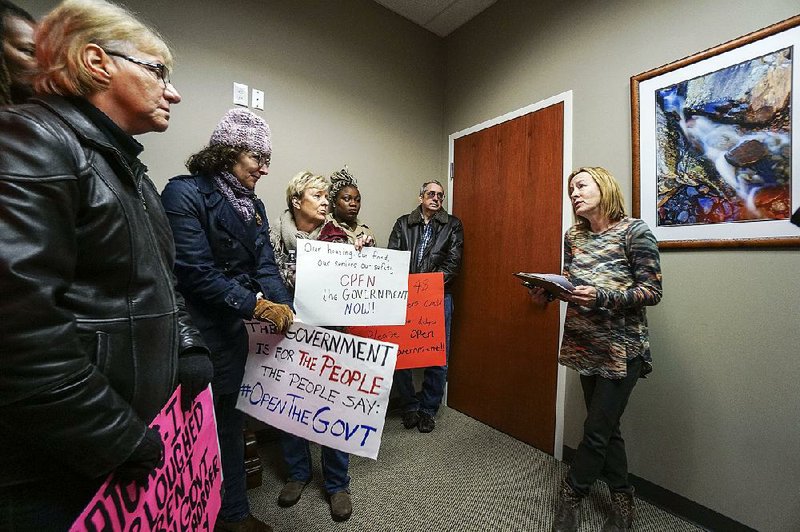 Sherry Flippo, Constituent Services Representative for U.S. Sen. John Boozman, R.-Ark., listens to what concerned citizens have to say about the government shutdown on Friday at the Senator’s Little Rock office.

The contracts on 10 Arkansas public housing projects expired in December during the partial government shutdown, and 28 more are scheduled to expire by the end of February.

This leaves property owners with two options: pay out-of-pocket for the costs associated with keeping up the property or evict hundreds of low-income tenants.

It leaves tenants with two options if the landlord can't keep them in their homes without income: pay their full rents without assistance or go homeless.

These apartments, which are operated by local housing authorities but privately owned, are part of a federal program called project-based Section 8. Those expiring in December, January and February are in nearly every part of the state and have 774 units, according to data obtained from Arkansas Community Organizations and compiled by national groups.

Arkansas Community Organizations is a group that advocates for renters and people with low incomes.

Nationally, 3.4 million Section 8 tenants risk rent increases or losing their homes if the shutdown continues through March, according to data from national groups. 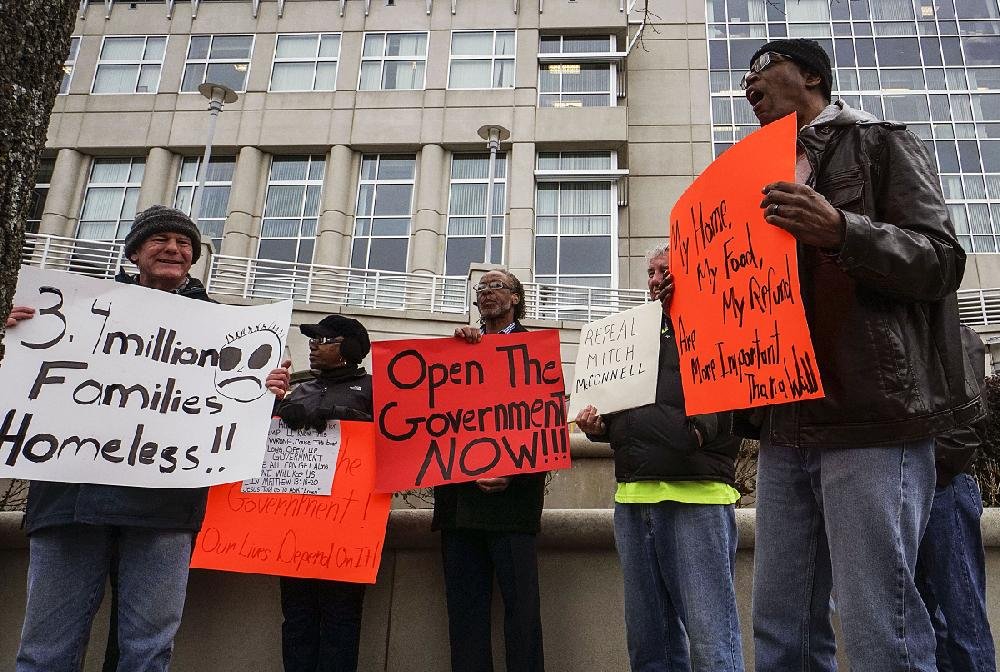 Speaking to a crowd of protesters who gathered at the Victory Building in Little Rock to protest the shutdown's effect on public housing, Neil Sealy, an advocate with Arkansas Community Organizations, said the government should be opened at least to keep programs that help low-income people get food and housing.

"That's what we've got to tell our senators," Sealy said. "We can't wait any longer."

In either case, the tenant pays up to 30 percent of income toward rent, and the assistance programs pay the rest.

The partial shutdown of the federal government began Dec. 22 and is the longest in U.S. history. A debate over funds to build a border wall between the United States and Mexico sparked a funding standoff between Congress and the president.

The U.S. Department of Housing and Urban Development hasn't been funded since.

A bill that would fund a few agencies, including HUD, the Transportation Department and the Department of Agriculture, passed a vote in the House of Representatives on Thursday. The Senate hasn't voted on the measure.

On Friday, protesters visited U.S. Sens. Tom Cotton's and John Boozman's Little Rock offices to ask the lawmakers' staff members what they were doing to get the government reopened and to tell them about the effects the shutdown was having on public housing.

"I've got to pay rent, and I have to find ways to pay for food," said Valencia White to a Cotton staff member. "... My children are the ones that's going to suffer the most."

White, who has a Section 8 voucher in Little Rock, has a 5-year-old and a 7-year-old. She's disabled from a degenerative disc disease and can't work.

Her voucher is safe until February, she said.

Michael Kane, the executive director for the National Alliance of HUD Tenants, said all contracts for Section 8 vouchers, including the project-based vouchers, will expire at the end of February. The alliance is a group of tenant organizations that work together to advocate for HUD tenants.

"Those tenants could face the street," Kane said. 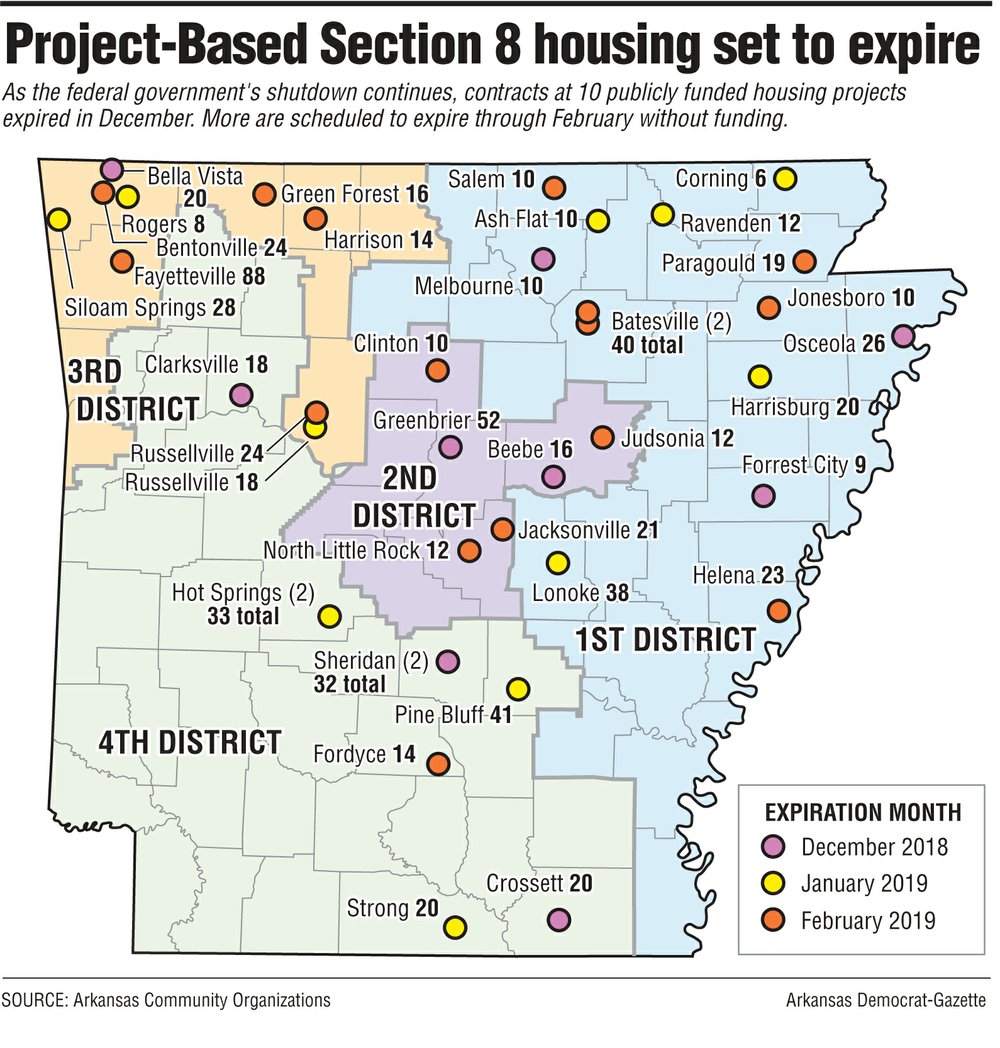 The nearly 20 protesters outside the senators' Little Rock offices chanted: "Security means four walls and a roof." Several said they felt that elected officials were holding low-income people and seniors "hostage" to push for a border wall rather than negotiate an end to the shutdown.

Both senators sent emailed statements to the Arkansas Democrat-Gazette about the shutdown after the protests. Cotton's press secretary said that Cotton "shares the concerns of all Arkansans who want the government to reopen" and referred to a few classifications of federal workers who are not receiving paychecks during the shutdown.

"He sincerely hopes the Democrats will negotiate with the president to reopen the government in a way that makes our country safer and gets people back to work," the statement says.

Boozman's statement said he was "disappointed" that the difference in priorities caused a shutdown and that Republicans and Democrats need to work together to find a solution.

"I will continue working with the president and my colleagues from both sides of the aisle to find an agreeable solution, but I do not believe such a disruption in services and uncertainty for federal employees is in the best interest of Arkansans," the statement reads.

Meanwhile, White says she's going to do everything in her power, from calling senators to attending more protests, to persuade officials to vote to reopen the government.