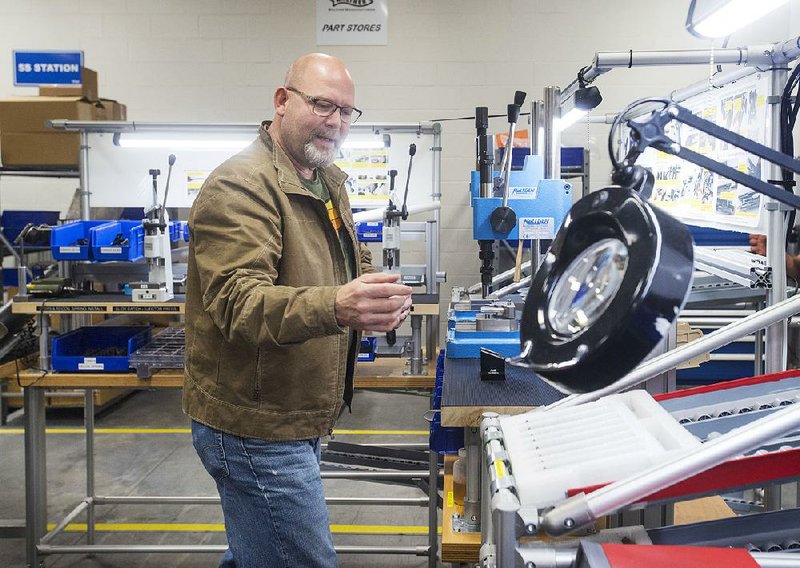 Greg Cornett, director of manufacturing for Walther, describes the first steps in assembly and testing of a PPK pistol at the Walther Arms site in Fort Smith.

FORT SMITH -- The iconic and sleek Walther PPK is considered one of the most easily identified pistols in history and now is being built in Arkansas at the gun-makers U.S. headquarters.

The pistol is commonly called a classic by experts and casual gun-owners alike. It gained cache as a trophy taken by World War II GIs fighting in Europe and later cemented its pop and gun-culture legacy as the firearm carried by fictional super-spy James Bond.

But since 2014 there has been no production of the PPK or PPK/S in the U.S. Before that, Maryland-based Smith and Wesson made the pistol for Walther under contract beginning in 1998.

Bret Vorhees, director of product development for Walther Arms -- the American branch of Germany-based Carl Walther GmbH, -- said it was time to bring the pistol's production back in-house where the company can make sure quality is top-notch. He said plans are to add machining capability over the next 18 months so the company can build more and more of the pistols components in Fort Smith. Currently most of the pistol's parts are supplied by third-party vendors.

Walther recently opened up for orders on the pistols and its first year of production is already spoken for, Vorhees said. Pistols are expected to ship by the end of January.

"That's a comfortable place to be," he said. 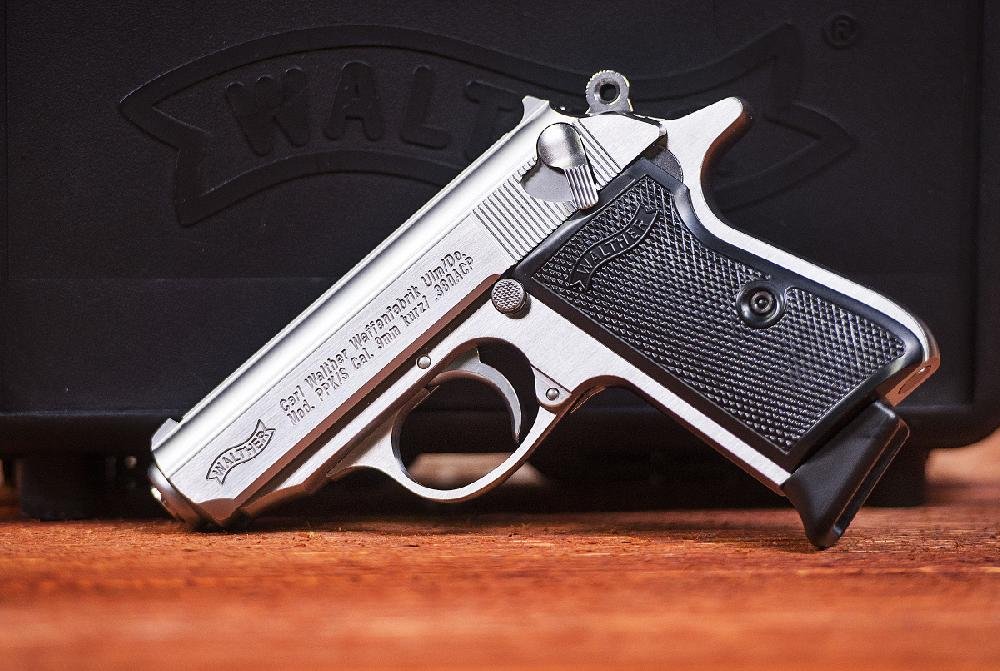 A Walther PPK pistol is displayed at the Fort Smith facility.

A small station at Walther's operation allows the assembly of the pistols. At peak efficiency, a single worker can build, test fire, clean, and prep 35 pistols for shipping in a day's time. Vorhees said about 20 workers, including some temporarily employed during peak demand periods, will be hired to build the pistols for sale by the company's more than 5,000 dealers.

Greg Cornett, director of manufacturing for Walther said the company is focused on using lean manufacturing practices to keep the assembly process streamlined and easily scalable. He said it takes about three days to train a worker to assemble the pistols.

Cody Osborn, marketing manager for Walther Arms, said plans are for Walther to expand the number and type of firearms it builds in Fort Smith and the lessons learned with the assembly of the PPK and the PPK/S pistols will be invaluable going forward.

Walther's PPK is a small, semi-automatic pistol chambered in .380 ACP. The pistol's magazine holds six rounds and it is available in blue or stainless steel. The PPK/S is a similar pistol, only slightly larger and has a magazine with a seven-round capacity. Both models are shipped with two magazines and have a suggested retail price of $749. Typically gun-buyers pay less from a retailer.

Michael Bane, television host and producer with The Outdoor Channel for programs including Shooting Gallery and The Best Defense said the PPK was developed by Walther and released in 1930. It was carried by police and some branches of the German military during World War II.

Import of the pistol was banned under the Gun Control Act of 1968. The PPK/S, a slightly larger version, was developed to allow import under the 1968 law. Later, in the 1980s the PPK was built in the U.S., under various licensing agreements.

For decades, the Walther brand has been closely linked with James Bond. In films, the spy created by author Ian Fleming, traded a Beretta pistol for his signature Walther PPK in Dr. No, which hit theaters in 1962. In the movies, Bond carried the PPK and other Walther pistols on and off for the next 50 years and change, including the Walther PPK/S in 2012's Skyfall and 2015's Spectre. [Bond's introduction to the PPK in Dr. No is available at arkansasonline.com/113drno]

Bane said the PPK and the PPK/S really caught on with Americans after it was linked so closely with Bond and his jet setting lifestyle. He said over the years it's become a popular pistol with gun owners who are seeking a statement making firearm that has a certain flair. He noted it's been very popular with celebrities over the years, including Elvis Presley.

Bane said the PPK's gravitas certainly will be attractive in today's concealed-carry pistol market, which is flooded with black, polymer guns that are seemingly identical to untrained eyes. He called most of today's pistol offerings prosaic -- functional and practical but with all the style of a concrete block.

"In today's marketplace everything is about fashion," he explained. "After a while a gun owner thinks 'Wouldn't it be great to have something classic?' and let's face it, the PPK is classic."

Ashley Hlebinsky, the Robert Woodruff curator of Cody Firearms Museum in Wyoming, said much like the Thompson submachine gun, the Walther PPK's image and reputation goes far beyond its humble origins. The Thompson, like the PPK, was initially used by police but through newspapers and films soon became identified as the gun of choice for mobsters. The PPK owes its broad recognition and pop-culture appeal in great part to the Bond films.

In the U.S., gun sales were solid in 2018. The FBI reported National Instant Criminal Background checks for 2018 through November totaled 23.6 million. With December's checks still to be tabulated, 2018's checks are higher than the total for 2015, the third-highest yearly total since 1998 when tracking began. Total checks in 2017 stood at 25.23 million, the second-highest number on record, trailing 2016 with 27.54 million, the highest total to date. While the FBI background check figures don't represent the number of guns sold one for one, they are generally used as indicators of firearms demand.

Over the next five years U.S. gun and manufacturing's growth will be linked primarily to defense spending, according to a report from market research group IBIS World. Revenue is expected to climb by about 2.3 percent a year to $19.6 billion. The segment not only includes arms and ammunition used by civilians but also machine guns, ammunition and other gear sold to the military.

The report predicts military spending will be a key component of revenue growth over the next five years. The report also notes that over the next five years the market share of the industry aimed at civilian consumers is expected to decline as gun buyers are anticipating less focus on new regulations. Typically, demand is driven in part by fear of new, stricter gun regulations.

"The reduced chances of new regulation will mean that people will be less likely to purchase new industry products at the same rate as in the previous five-year period," according to the report. "This will likely help to normalize demand in the near term, causing fewer sales or at least keeping growth to a minimum. However, if prospects for stricter federal regulations increase, an increase in demand may return. Events in 2018 have already brought back discussions of stricter laws and new regulations."

According to the 2018 Firearms and Ammunition Economic Impact Report compiled by the National Shooting Sports Foundation, Arkansas had 3,061 jobs directly related to the firearms industry in 2017, with annual wages of $102.6 million. Arkansas ranks second in the nation in total economic output per capita and sixth for total jobs per capita dependent on the firearms industry, according to the report. Nationally there are a little over 149,000 jobs directly related to the industry with total wages of $6.1 billion. The National Shooting Sports Foundation is trade association for the firearms industry.