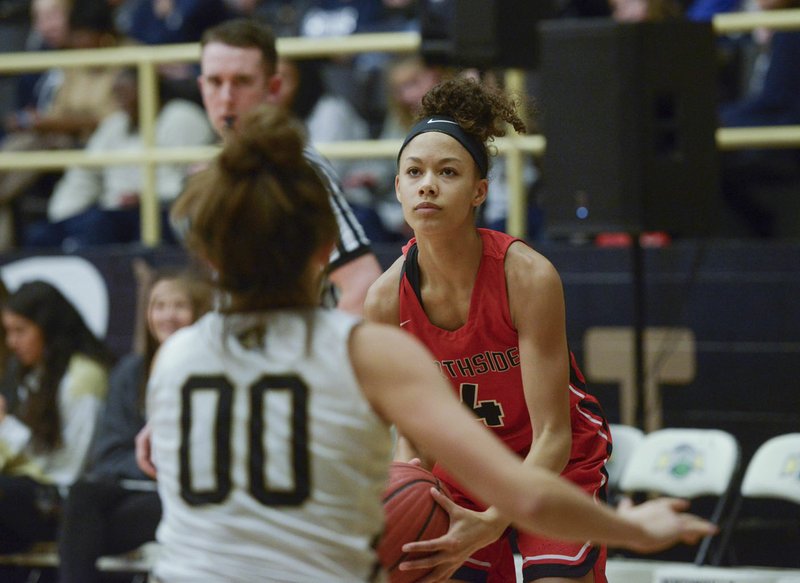 FORT SMITH -- Jersey Wolfenbarger was listed as a 5-foot-9 freshman when she joined Fort Smith Northside's girls basketball program last season, and coach Rickey Smith said that might have been stretching it just a little bit.

NOTABLE Joined the Lady Bears last season as a 5-9 freshman point guard, but has grown 4 inches since that time. … Has raised her scoring average from 10.3 points per game last season to 15.4, which leads the team. … Has improved her rebounding from 2.2 to 3.1 per game this year, and she now averages 1.7 steals per game, compared to less than 1 last year. … Already earning interest from colleges, including Arkansas, but said she would not worry about it until at least next season.

There's no need for exaggeration when it comes to Wolfenbarger's height these days, especially when Smith says she can now stand eye-to-eye with him.

The sophomore point guard, who said she measured herself against her teammates last season, now stands among the tallest Lady Bears with room to grow. Wolfenbarger began the season as a legitimate 6-1, and she's still getting taller.

"All my pants, you can see them. They cuff at the end," she said. "But it is what it is. That doesn't really affect me that much. It's definitely a blessing, and it helps in basketball."

While Wolfenbarger has enjoyed the benefits of being a taller person, her basketball skills have also shown some tremendous growth this season. She averages 15.4 points per game this season, compared with 10.3 a year ago, and she has scored in double figures in every game this season, including a season-high 22 points against Moore, Okla.

She's also improved on her rebounding and assists, and even though she's taller, she's almost doubled her steals this season.

"I think I've reached a new level in maturity," Wolfenbarger said. "I'm able to lead my team better and communicate with them better than I did last year.

"Growing your mind is way different than growing your body. You can grow your mind every day just by learning something new. I think that's what has helped me with the transition from my freshman to my sophomore year. Having that year last year really helped because I wasn't showing up as the baby. We were growing up together."

Her basketball improvement, however, didn't simply come by increased height. A lot of it has to do with the work she puts in on a regular basis -- by herself as well as with her team -- and Smith said he's never been around a player that works on her game as much and as hard as Wolfenbarger does.

In fact, Smith said he's had to discuss with her about taking a day off from time to time.

"We practiced from 2-4 p.m., then I ran home for dinner and came back at 6:30 to let a pee-wee team in," Smith said as he recalled one of Northside's workout while school was not in session. "She was still here shooting, so she was here from 1:30-6:30. And that's daily.

"Before a game, she's getting 250 shots up on the gun. She's here every night, working on her game. Her work ethic is second to none. There's nobody that can outwork Jersey because there are only so many hours in a day. That's what you're so proud of: she's going to make the commitment to do better."

One drawback to Wolfenbarger's increased height is the clumsiness some people experience with such growth spurts, and she admitted she felt it at times. Her solution to dealing with the situation is working her way through it without losing any of her quickness

Smith said Wolfenbarger received some help from Arkansas women's coach Mike Neighbors, who gave her videos of drills to work on during a visit in August. It allowed her to bring the drills home and work against Kelsey Plum, who Neighbors coached at Washington, as well as Razorback players.

"One of the things that helped me when I was shorter is I was really quick," Wolfenbarger said. "I'm trying to keep that while I am growing. When I was feeling clumsy, I did agility and core balance so it wouldn't interrupt what I'm doing in the game.

"I would like to say my rebounding has really grown. I didn't rebound as much last year, and I talked to coach about it. He said one of the things I could improve on with my new height is rebounding. Every game, I try to make that my mission. I like to see how many rebounds I can get in a game."

Meanwhile, Smith watches and marvels at the work ethic his sophomore guard continues to display, both in practice and in games. Wolfenbarger has given him a great example he can use to other Lady Bears.

"She's already at a plateau where you're hoping to get a kid at as a junior or a senior," Smith said. "I look forward to seeing where she's at for the next two years. I can only imagine the growth she's going to get because of her work ethic. It's gratifying.

"I've often said this to my kids at home -- when we're watching a basketball game in the recliner and they ask 'Who do you want to win?' My answer, unless it's an Arkansas team, is whoever deserves it or whoever works the hardest. If you translate that to Jersey, she does deserve it. She works the hardest."