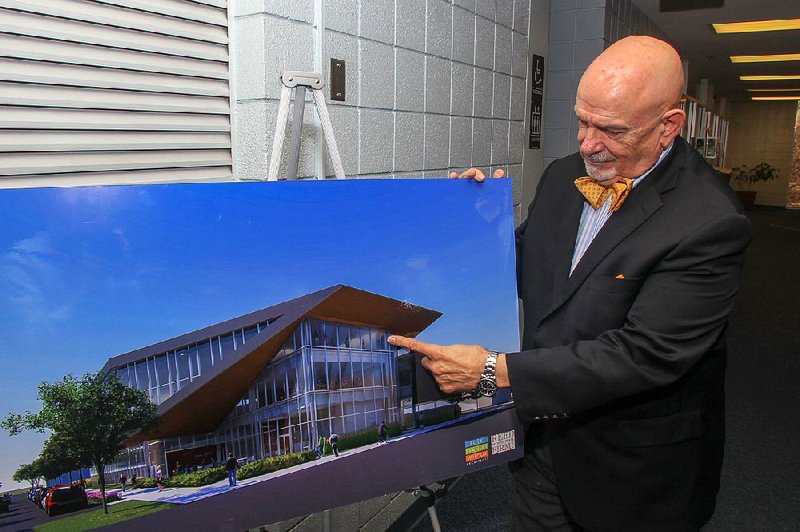 Taylor Eubank, former interim director of the Pine Bluff/Jefferson County Library System, shows some of the features of the new main library, now under construction in Pine Bluff. ( Dale Ellis)

PINE BLUFF -- Excitement is building among staff at the Pine Bluff/Jefferson County Library System as work progresses on a new, state-of-the-art facility that is scheduled to open a little more than a year from now.

Once complete, the $10.5 million, 32,000-square-foot complex will house a library, a media center, two recording studios, conference rooms and a teen loft, among other features. Pine Bluff voters approved in November 2016 a property tax increase of 3 mills for 30 years to raise about $14 million to fund bond placement, legal fees, construction of the new library, and $500,000 in improvements to the Watson Chapel branch library.

In a separate election, Jefferson County voters approved a 0.25-mill increase in property taxes to fund improvements to branch libraries in White Hall, Redfield, and Altheimer.

Taylor Eubank, who served as interim library director in 2016 and 2017, said the current main library, which is roughly the same size as the facility under construction, is outmoded, outdated and prone to flooding on the lower level where the children's library is located.

"The children's library and the performing arts space are in the basement, and the parking lot inclines downward to the entrance," he said. "Well, there's only one way for water to go, and that's down."

When the building flooded in 2016, Eubank said, water was nearly 2 feet deep in the children's library and some 4 to 5 feet deep in the performing arts space, to the point that it covered the stage. In 2017, a malfunctioning sump pump sent water running into the building.

"It doesn't matter why it flooded," he said. "Flooded is flooded. Why do we need a new library? That's 4 feet of reason right there. Those weren't the first times this building has flooded, and they certainly aren't going to be the last."

A major feature of the new library, Eubank said, will be its technical capabilities. Those will include Wi-Fi throughout the building, computer coding classes and banks of computers the public can use to access the Internet.

"All of those things you and I take for granted, we're going to teach people how to do and give them a place to do it," he said. "Many of our youth at Pine Bluff High School, at Dollarway, do not have access to Internet at home. We're it.

"Therefore, if there's somebody in that home who wants to find a job, they can't do it because today the job market is online. The 'help wanted' ads are online, the applications are online, you do your resume online. That's the fact of life."

Eubank said Wi-Fi access at the main library and at the branch libraries at Altheimer, White Hall, Watson Chapel and Redfield are, for many residents, the only Internet access they have, which has led to many area teens congregating around the libraries after hours to take advantage of the Wi-Fi access.

"We're trying to make these services available now, but with this bond money we're going to be able to do it more and better," he said.

Eubank said the new library also will have a computer training lab.

Another unique feature will be a fully stocked teaching kitchen, which Eubank said will be used to help people develop skills in the kitchen and provide nutrition education.

"We've got people in Pine Bluff, kids 9 or 10 years old up to 15 or 16 years old, they're living in a house with maybe 20 people living in the house, not many adults, and somebody has to get up and get those kids off to school, if they're going to go to school today," Eubank said. "We want to teach these kids -- and this sounds horrible to say, because it is horrible -- but if someone is going to get these kids up and off to school, they're the ones who are going to have to do it.

Eubank said the teaching kitchen, recording studios and computer lab will expand the library's offerings far beyond its core mission of providing books and recorded media for public use.

"Those are three things that we cannot do in our current building," he said.

Bobbie Morgan, the full-time library director, was hired in late 2017 to oversee the library's functions. A native of Cincinnati, Morgan said she fell in love with Arkansas the first time she came to the state and was sold on Pine Bluff on her first visit there.

"My first visit was when I came to Pine Bluff to interview and they drove me around the city, I guess to see if I could handle it," Morgan said. "But where some people may see ruin and desolation, I see a lot of opportunity, and the fact that it was going to be a challenge excited me."

Morgan said she has overseen several library building projects during her career and that she is excited at the prospect of ushering in the new main library and renovations to several of the branch libraries.

One challenge, she said, will be figuring out how to make the most of the library system's $1.4 million annual budget once the new building is completed.

"It is not sufficient to operate now," Morgan said. "It's a pretty flat budget. I've been examining every part of the budget to see where cuts can be made."

She said any budget increase would have to be approved by the voters, which she doesn't think is likely to happen on top of the property tax increase approved in 2016. So she is combing through the budget to find any savings she can.

"I don't care if it's five dollars, we're looking for it because those five dollars add up," she said. "If we find an area that we're paying thousands of dollars for and 17 people have used it, we're cutting it."