Trust set to protect 900 acres in Ozarks; tract along lake seen as ‘pristine’ 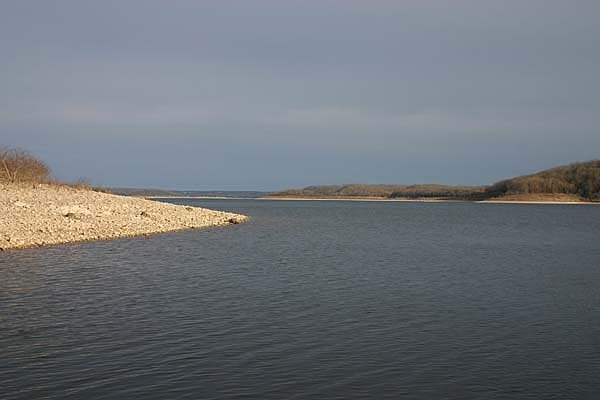 Bull Shoals Lake is shown in this file photo.

A 900-acre property along Bull Shoals Lake that's described as "pristine" will be preserved forever under a contract between the owners, Gerald and Dwan Garrison, and the Northwest Arkansas Land Trust.

It's the largest tract placed into protection with the region's only local and accredited land trust, said Lauren Embree, a spokesman. She said the land trust has conserved more than 3,300 acres to date, including the Garrison property.

Dwan Garrison can sum it up in two words: no bulldozers.

"We did it to protect the land because there's been so much development in this area since we moved here in 2003," she said. "We have seen many changes. It seems that people will sell their farm, and all of a sudden there is a subdivision. We could not bear to see this natural beauty turned into a subdivision."

"This is not something you can do over," Gerald Garrison said. "It's a once-in-a-lifetime opportunity to do this. ... It cannot be subdivided, and there are pretty stringent restrictions on what can be done to the land.'"

The agreement is called a permanent conservation easement. The Garrisons retain ownership and use of the land. Their five children will inherit the property, and they can build four more houses on it, but there are restrictions on where they can build.

"But if the child doesn't build, then there won't be anybody else to build," Dwan Garrison said. 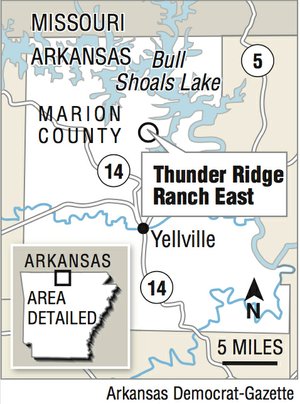 A map showing the location of the Thunder Ridge Ranch East.

Gerald Garrison said property in the area generally appraises for about $2,000 an acre.

The couple's property is known as Thunder Ridge Ranch East. It's a mix of mostly forest with bluffs, springs, streams and glades, according to a news release from the land trust.

There are about 125 acres of pastureland on the ranch. Subsequent owners can maintain that pasture for agricultural purposes, but they can't expand it, Dwan Garrison said.

Gerald Garrison first arrived in the Ozarks in 1957 on a float trip with his parents, Eskelle and Eddie Garrison.

Smitten with the beauty of the area, the elder Garrisons bought a little more than 3,000 acres in 1958. That property was later divided between Gerald Garrison and his two siblings.

Gerald Garrison said putting the land in a permanent conservation easement will create an "everlasting legacy" to his parents.

It also will help preserve the scenic landscape, native flora and fauna, and the water quality of Bull Shoals Lake, according to the news release.

"Any time we can preserve such a large tract of pristine Ozark habitat, it is a true gift to the people and wildlife of Arkansas for many generations to come," said Terri Lane, executive director of the land trust. "We are excited to forever protect this amazing property and appreciate the Garrison family for establishing such an important conservation legacy."

By holding and managing donated land and providing conservation easement services, the land trust protects water quality, farms, wildlife habitat, and places for outdoor recreation while enhancing quality of life for today and future generations, according to the news release.

The service area of the land trust includes 13 counties in Northwest Arkansas, with a core focus on Benton and Washington counties.