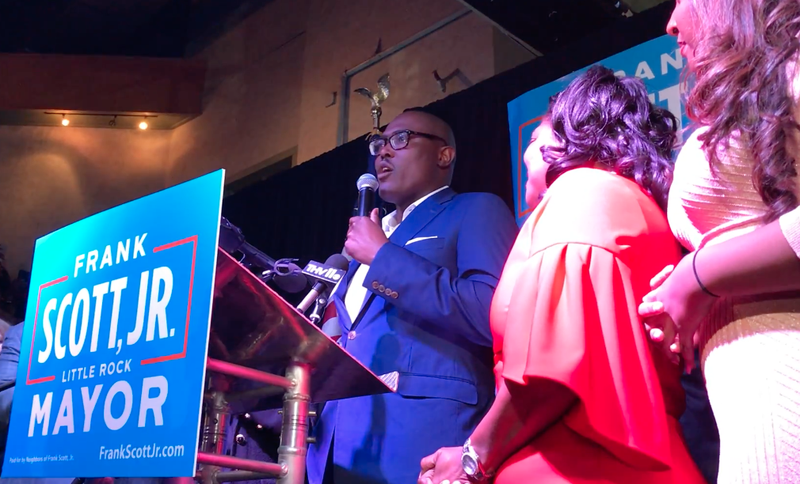 Frank Scott Jr. speaks to supporters at Cajun's Wharf during a victory speech on Dec. 4, 2018.

Little Rock Mayor Frank Scott Jr. announced Monday that he is implementing a new organizational structure at City Hall that increases his executive authority and shifts the role of the city manager.

Scott said he will use his executive powers to hire department heads -- including Little Rock's next police chief, a hire the city has set a timeline for making by mid-February.

The mayor will outline and direct all duties and responsibilities that the city manager will execute, according to Scott's announcement.

Scott said the restructuring aligns City Hall with that ordinance.

The change is effective immediately, he said in his announcement.

"More than 10 years ago, the citizens of our great city voted for change in leadership at city hall, and in December they elected me to bring it forth," the mayor said in a news release. "Now, it is my responsibility to A.C.T., that is to be Accountable, to be Clear and to be Transparent."

A spokesman for Scott said he was not available for further comment Monday evening.

The news release stated that Scott began implementing the new structure on Jan. 8 and that the city Board of Directors, city manager and department heads have been notified of the change. No public meeting or discussion was held.

During their campaigns, Scott and his opponent in the Dec. 4 runoff election, Baker Kurrus, both called for the mayor to have more policymaking power.

City Manager Bruce Moore did not return a voice mail left on his cellphone Monday evening.

In December, the city board approved a resolution to create a forum structure in the first month of the year to study the city's form of government. It was not clear Monday whether a study will still take place.

City Director Dean Kumpuris, who pushed for the resolution to be drafted and approved, declined to comment for this article.

Jim Lynch, a longtime community activist and former city employee, said he believed the mayor having the ability to take initiative on different issues was a positive thing for the city and that Scott's changes were the next step in implementing the 2007 ordinance.

"I think it's part of the natural evolution, frankly," Lynch said.

Kathy Wells, president of the Coalition of Greater Little Rock Neighborhoods, said there had been a lot of interest in changing the city's form of government over the years but that the community group had no consensus on the issue.

"It changes the structure substantially," Wells said of Scott's announcement, adding that it moved the city into "undiscussed territory."

The campaign to move Little Rock to a strengthened, full-time mayor more than a decade ago was supported by the Coalition of Greater Little Rock Neighborhoods as well as the Little Rock Regional Chamber of Commerce.

Jay Chesshir, the president and chief executive officer of the chamber, said it provided for a clear leader in how city government will operate and function.

"What Mayor Scott has outlined certainly responds to that action from over 10 years ago," Chesshir said. "I believe this action certainly shows that he's willing to lead the city toward a brighter future."

The mayor gets his authority from Ordinance No. 19,761, which gives the mayor authority over issues including preparation of the city budget, as well as veto power. The legislation states in part that the powers and duties that state law grants the city manager "shall hereafter be performed at the direction of the mayor."

The 2007 ordinance states that the mayor may nominate, hire or remove the city manager and city attorney as well as individuals to fill vacancies on city boards, authorities or commissions, but those changes are subject to the city board's approval. 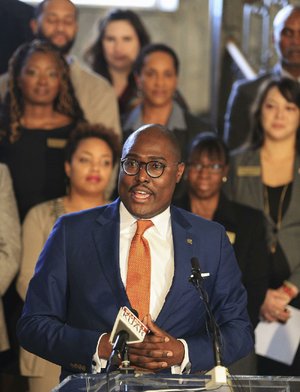 Photo by Staton Breidenthal
Mayor Frank Scott Jr. speaks Tuesday during a press conference at Little Rock City Hall to announce the Rights After Wrongs day of service event in honor of the Dr. Martin Luther King, Jr. holiday. The event will be held Saturday, Jan. 19 from 9 a.m. to 3 p.m. at the Arkansas Workforce Center, 5401 S. University Ave. in Little Rock and will offer a variety of re-entry services.