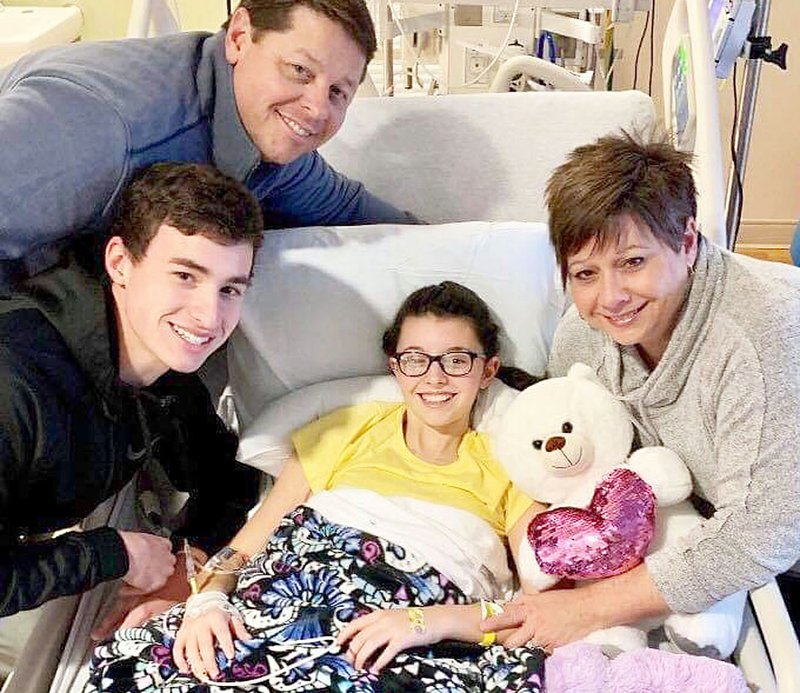 SUBMITTED PHOTO Kennedy Allison is recovering at Arkansas Children’s Hospital in Little Rock after passing out at school Friday. Her parents, Keith and Jennifer Allison, and brother Landon are keeping her company.

Smiling and giving a thumbs up from her hospital bed in Arkansas Children's Hospital, Kennedy Allison is a testimony to the efficacy of training and love of community.

Last Friday was an ordinary day for the petite brunette Pea Ridge cheerleader. It was game day for the Blackhawks' senior basketball teams, a road game at rival Gravette in the 4A-1 West Conference.

Near the end of a morning class period, Kennedy collapsed in Connie Trotter's classroom. Laughter and typically loud teen conversation turned to silence as one of their own laid on the floor, lifeless.

Trotter quickly assessed Kennedy and immediately sent two students to get help -- one to the principal, Charley Clark, and one to the school nurse, LaRay Thetford. Clark and John E. King, health teacher and coach, were standing nearby in the front hallway as students filled the hallways moving to their next hour's class.

Clark radioed for Thetford who, already on the way, arrived seconds later and began cardio-pulmonary resuscitation. King ran down the hall for the automated external defibrillator and advised a teacher nearby to turn off the alarm that was activated when he removed the AED from its box on the wall near the gym.

The swiftness of the Pea Ridge personnel in a crisis was likely what saved Kennedy's life, her father said.

"My main concern was how long was she without oxygen. From what we're being told, they started CPR within seconds of her hitting the ground," Keith said. "This is no coincidence. I've seen all the sequences. ... God took care of her. The fact that they were trained and prepared and didn't panic and they went right to work on her. That doesn't just happen. We're just thankful that everybody did what they were trained to do.

"Pea Ridge schools is a pretty special place to us."

Keith said they were told at the hospital that the survival rate for ventricular fibrillation was about 17 percent when it occurs outside of a hospital, and the odds only increase to 46 percent for those who are struck inside a medical facility.

He posted on Twitter: "She collapsed from V-fib after class, was blue, no pulse, not breathing, pupils fixed and Coach King and Nurse Thetford revived her with CPR and the AED. She's recovering at ACH in LR now. The PR School was prepared and she's alive because of them AND GOD. Period."

King, who has taught health education for more than 20 years, has taught CPR training. He and Thetford taught CPR to Clark, a former boys basketball coach at the school. Clark said he took his first CPR class when he was a senior in high school. Over the years, he was trained, and then he trained others in the life-saving technique.

"One thing interesting in my mind," King said, "as I've been teaching this, teaching a bunch of these teenage kids how to do this, I've been wondering if I'd really be able to do it. Does it really help?

"Now, I've got the answers. Your training pays off."

King also recalled that several years ago, a former student of his saved another person's life using the CPR he learned from King.

"It all gets surreal," King said.

He said he didn't realize that the AED would count the CPR compressions performed in between times of analysis and electric shock.

"This is like for real ... you count when you're doing compressions," King said. "It counts for you. It tells you everything it's doing."

"I'm a firm believer that AED brought her back," Thetford said. "She was not responding to CPR."

"When the paramedic got there, he got a pulse," King said. "That was the best feeling."

"The lead paramedic was fantastic," King said of LaRon Edwards.

"He took control and was awesome," Thetford said. "He was very assertive as he needed to be."

"People are giving me praise and stuff. I had an awesome team. They (school staff) did such a wonderful job even before I got there," Edwards said.

He said the initial call had said a student in distress and he didn't know it was a "code."

"When I walked into the classroom, she was lying lifeless on the floor -- no color, eyes fixed. They had the AED hooked on her. It was analyzing, and shock was advised. They cleared ... they started CPR again, did one round and she gasped for breath. She had a good, pounding pulse. I immediately began to bag her. My main focus was to keep her breathing," Edwards said.

The ambulance transported Kennedy, sedated and intubated, to Northwest Medical, from where she was later transferred to Arkansas Children's. It wasn't until she was stabilized at ACH that medical staff began to decrease the sedation and Kennedy began to awaken.

Edwards, who has been with Pea Ridge EMS about a year and in Northwest Arkansas for four years, said he stayed on the scene and prayed with the Allisons.

"Sunday morning her dad sent me a picture. Saturday was my birthday. That was the best birthday gift I could have," Edwards said. "I was put in a position as a catalyst used by God to serve. That's what gets me from day to day -- to possibly have an impact on someone's life."

AED in school is essential

Thetford was instrumental in getting the AEDs in the Pea Ridge schools as she wrote the grant to pay for the first ones in 2007. Over the past several years, more have been added. She also commended former teacher Randy Holman who wrote a grant to purchase the CPR mannequins used for training.

Thetford said she received a call from her head nurse who said the physician at ACH said the team did everything perfectly after he read the printout from the AED.

"Anybody who's had any training whatsoever can use the AED, and the Good Samaritan law will cover them," Thetford said.

School superintendent Rick Neal said: "We're blessed that LaRay is skilled enough ... it was a blessing all the way around. We couldn't have asked for better people equipped to deal with that. She was gone.

"There were so many positives, more than anybody can comprehend, that brought their daughter back to them. It was a team effort. In a building of almost 700 kids, 60 people made a difference."

Clark said other teachers also played key roles, adding that he left the room to see if the ambulance had arrived and realized other faculty members had cleared the hallways and directed emergency personnel to the correct classroom.

"This looked like something we train for every week," King said, explaining that there are important steps to cardiac chain of survival which include, first of all, early recognition, with which he credits Trotter.

"Early advanced care is essential," King said, admitting that the six to seven minutes seemed like a very long time to those in the classroom with Kennedy.

"I couldn't be happier with King, Thetford and Trotter," Clark said. "Friday, when it was playing out, we didn't know how it would turn out. When I woke up Saturday morning and saw her smiling face (on social media), I was relieved."

Thetford had a more personal attachment to Kennedy, who babysits Thetford's grandchild.

"I saw her smiling, and I was crying," Thetford said. "I give God the glory. John King and I have done CPR with the students. It was so comforting to be working together."

Kennedy was scheduled to have a defibrillator implanted Tuesday as she begins the road to recovery. Her family said they have been overwhelmed by the outpouring of support through messages, texts, hospital visits and more.

"The whole Pea Ridge community, Northwest Arkansas, we've been overwhelmed with love," Keith Allison said. "You obviously don't wish this on any parent. We give God the glory. We feel like He was working through everybody that day."