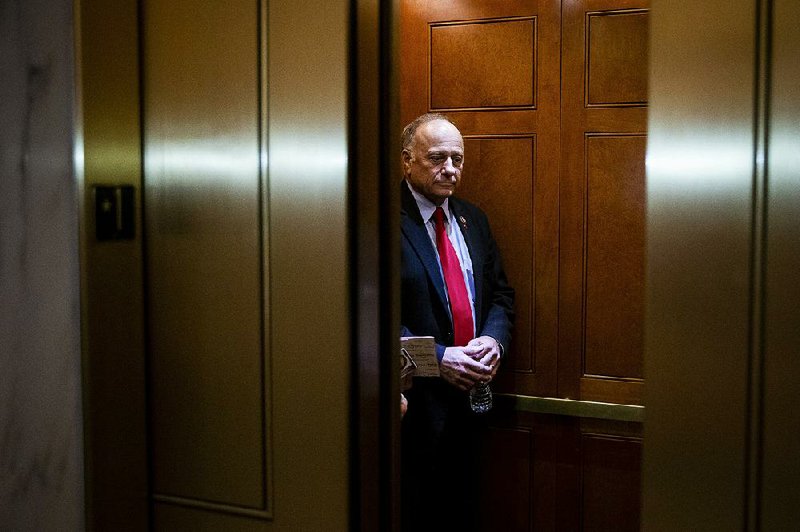 The vote was 424-1, with all four House members from Arkansas voting "yes"; U.S. Rep. Bobby Rush, D-Ill., voted against it, arguing that the statement was insufficient.

King, who has a history of making racially charged comments, was among those voting "yes"; he insisted his words to a New York Times reporter had been misconstrued.

The Iowan's words were followed by FBI-generated definitions of "white supremacist" and "white nationalist" and statements by Presidents Abraham Lincoln and Ronald Reagan as well as a quote from civil-rights leader Martin Luther King Jr.

The resolution also highlighted two recent hate crimes: the murder of nine churchgoers at Emanuel African Methodist Episcopal Church in Charleston, S.C., in 2015 and the killing of 11 worshippers at Pittsburgh's Tree of Life synagogue in October.

Instead of explicitly rebuking King, the resolution stated that the House "once again rejects White nationalism and White supremacy as hateful expressions of intolerance that are contradictory to the values that define the people of the United States."

This is the second such resolution to pass the House since torch-bearing neo-Nazis, Klansmen, white supremacists and white nationalists marched on Charlottesville, Va., in August 2017.

The earlier resolution, approved by the House and Senate, had also urged President Donald Trump "to speak out against hate groups that espouse racism, extremism, xenophobia, anti-Semitism, and White supremacy."

King's comments on nonwhites and on immigrants had drawn previous rebukes.

In October, U.S. Rep. Steve Stivers of Ohio, the chairman of the National Republican Congressional Committee, tweeted: "Congressman Steve King's recent comments, actions, and retweets are completely inappropriate. We must stand up against white supremacy and hate in all forms, and I strongly condemn this behavior."

"The evil ideology of white nationalism and white supremacy go against what we stand for as Americans and have no place in our rhetoric or society," said U.S. Rep. French Hill, a Republican from Little Rock.

U.S. Rep. Rick Crawford, a Republican from Jonesboro, held out the possibility that he would support additional disciplinary action against the Iowan.

"My colleague Steve King has a history of making controversial comments, but this time, he went too far and made comments that I believe were ignorant and indefensible," Crawford added. "I fully support the actions of House Republican leadership and will weigh carefully any future votes or actions that may come up before the House that pertain to his comments."

King's political fate, ultimately, "lies with the voters in his district and whether or not they believe he is fit to be their elected member of congress," Crawford added.

U.S. Rep. Bruce Westerman, a Republican from Hot Springs, said he backed the decision to deny King any committee assignments.

"I believe that all men and women are created equal, and ideologies that do not recognize that fact have no place anywhere in our country, particularly in Congress," he said. "House Republican leadership has made it clear to Rep. King that white supremacy will not be tolerated in this legislative body, and I stand by their decision."

A spokesman for U.S. Rep. Steve Womack, Alexia Sikora, said Tuesday's vote "sends a clear message that there is no place in America for bigotry or hate."

Noting that the Republican from Rogers had supported the resolution, Sikora said: "Those who associate themselves with white supremacy, white nationalism, neo-Nazism, or any other hate group -- are not only on the wrong side of history, but they are also at odds with the values of our nation. Statements of prejudice and racial intolerance are reprehensible and have no place in our national or political discourse."

On the Senate side, two Arkansas Republicans who previously served alongside King in the House also issued written statements.

"The House was right to take action against Steve King. Comments like the ones he made to the New York Times have no place in the Republican party," said U.S. Sen. John Boozman of Rogers. "Those views run counter to what America stands for and should not be tolerated in our national discourse."

"The term 'white supremacy' became offensive because white supremacy is offensive, as is any form of racial supremacism, which undercuts the founding promise of our country," he said.