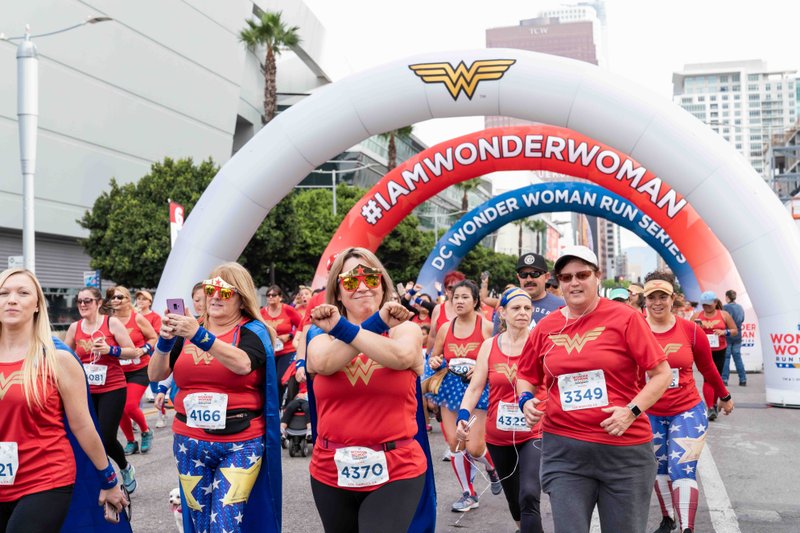 Racers mug for the camera during the DC Wonder Woman Race Series on Nov. 4, 2018, in Los Angeles.

Wonder Women, Wonder Men and Wonder Children will race through downtown Little Rock dressed as superheroes May 11 when the DC Wonder Woman 5K and 10K arrive in Arkansas.

Featuring costumes for all racers and a party atmosphere, the new footraces are part of the DC Wonder Woman Run Series, a joint project of California-based promoter SON Events and Warner Bros. Consumer Products on behalf of DC.

In 2018, its first year, the series of five races in California drew more than 10,000 participants, according to a news release. This year, the organizers are booking 10 events in cities across the nation and Canada.

Geneva Lamm, co-executive director of the marathon, said the marathon team is partnering with the series in Little Rock. "We are setting it all up and we'll be running it and creating the fun. We are part of the organizing body of the event."

For its work, the marathon will receive a $10,000 fee and possibly a bit more, Lamm said Thursday.

She and marathon co-director Gina Pharis attended a Wonder Woman 5K/10K in Los Angeles in November "to see is this something we want to bring to Little Rock."

“We had such a good time. It is so cool to see 5,000 Wonder Women and Wonder Men, dressed, running down the street. It is so cool," Lamm said. "It celebrates everything about moving — old, young, little, big. It's just joyous."

Although the goal is a party atmosphere, both races will be chip-timed and the first three finishers, male and female, will win awards, Lamm said.

Registration includes a red T-shirt or singlet to be worn during the race, wrist cuffs, a tote bag and a finishers medal on ribbon, a souvenir bib number and a post-race finish-line festival with live entertainment and complimentary photos. An optional "upgrade" kit adds a gold visor, socks and stickers for an extra fee.

The standard kit for children is a super cape.

Racers can fancy up their outfits by shopping before the race at an expo with “everything Wonder Woman” for sale, Lamm said.

A tentative map of the course is online at DCwonderwomanrun.com/little-rock.

"It is a new course which has parts of the Little Rock Marathon course in it," Lamm said. "It will be Gina and Geneva certified — so it will be accurate, but it won't be USA Track & Field certified."