The Little Rock Port Authority has secured deals worth $3.7 million to purchase nearly 300 acres, including a 130-acre tract that port officials say would in turn free up nearly 1,000 acres of port property to establish a large site for heavy manufacturing.

The authority's board of directors on Wednesday authorized negotiation of a deal to purchase 155 acres worth up to $3.1 million from the Quapaw Nation, land that state and local officials thought would become the site for a casino.

The terms include the purchase of 77.5 acres within 60 days for $1.45 million and an option to buy the remaining 77.5 acres in two years for $1.7 million. The tribe would continue to own about 5 acres it considers sacred ground.

The board also voted to approve a deal worth $450,000 on a 140-acre site to relocate a land-based aircraft navigation aid, a radio beacon, which is surrounded by port property. Rules governing the operation of a navigation aid don't permit heavy industrial development around it.

The deal for property off Interstate 440 and north of Interstate 40 for a new beacon is contingent on the property undergoing engineering modeling and testing by the Federal Aviation Administration and then the designing and building of a new navigation aid, a process that Bryan Day, the port authority executive director, said could take up to two years.

The navigation aid, part of the FAA's nationwide network of VHF Omni Directional Radio Range stations -- commonly called VORs -- sits on 55 acres that could become port property once the navigation aid is removed, Day said. When that property is acquired, it will be combined with property the port already owns and, coupled with some other purchases, would leave the port with nearly 1,000 acres available for development.

"It gives us close to a 1,000-acre super site, which gives us the potential to market to another industry similar to Welspun," Day said.

Welspun Tubular LLC opened on a 740-acre site within the port in 2009 and recently acquired a 44-acre site for $4.5 million. Employing 400 workers, Welspun's $150 million facility can produce up to 350,000 tons of spiral welded pipe annually for the oil and gas industry.

The Quapaw site cost the port more money, but a potential site for the navigation-aid station may be a more significant land acquisition for the port, according to Day.

"But what I'm more excited about is we've identified a 100-acre site northwest of Galloway that -- we haven't completely confirmed it -- by all early accounts ... will work for the VOR cone relocation."

"It's exciting to have some progress or resolution to this," she said at Wednesday's board meeting.

The site was the top choice of the FAA officials of the eight or nine potential sites identified, Day said.

The site for the beacon is 100 acres on one side of I-440. The seller, F&D Ranch, required the port to purchase another 30 acres on the other side because once the 100 acres are sold, access would be cut off from the remaining 30 acres, Day said.

He told the port authority board that he envisions reaching out to a conservation group to preserve the 30-acre site.

The Quapaw property has been long sought by the port. Day told the board the purchase price was competitive with surrounding land and in one case, less expensive.

Day said he approached Quapaw officials shortly after Arkansas voters approved in the November general election amendment 100 to the Arkansas Constitution, which authorized placing casinos in Jefferson and Pope counties as well as alongside existing gambling facilities at the racetracks in Hot Springs and West Memphis.

The development arm of the Quapaw Nation is planning the Saracen Casino Resort in Pine Bluff. 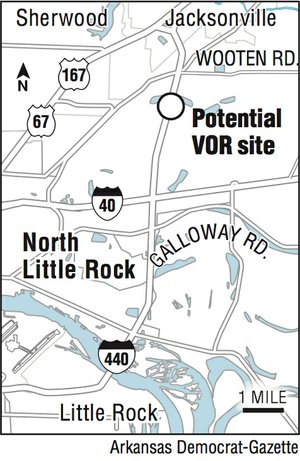