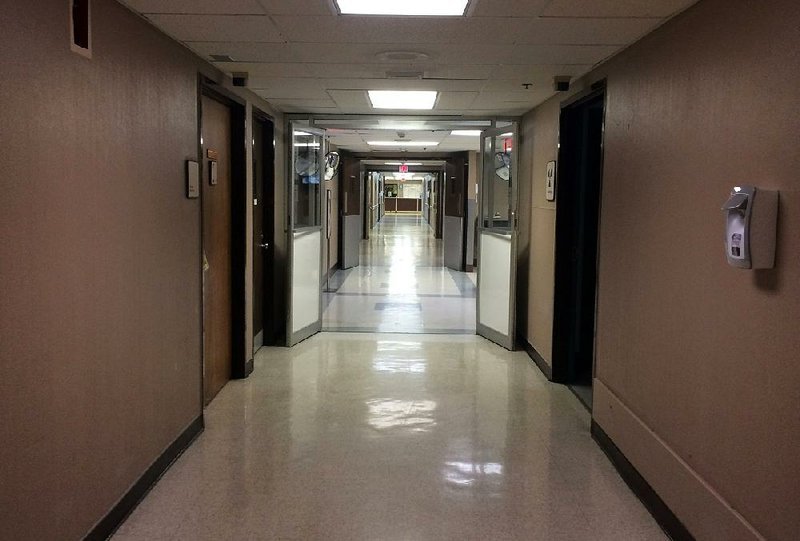 FILE - A hallway in the De Queen Medical Center shows no sign of activity, with many doors shut tight and the cafeteria closed.

More than $117,000 in back real estate and property taxes are owed on De Queen Medical Center, part of almost $2 million in similar taxes owed by company-operated hospitals across seven states.

The struggling hospital recently came under investigation by labor regulators because of late payroll checks and claims of unpaid insurance premiums and taxes on employees' behalf. It is in delinquent status for tax years 2016 and 2017, and on Friday it owed $117,519.12 in taxes, with interest accruing daily, according to the Sevier County tax collector's office.

The unpaid bill is part of a pattern seen at other facilities run by Missouri-based ownership group EmpowerHMS.

According to representatives in the tax collector's, treasurer's or trustee's offices in Arkansas, Kansas, Oklahoma, Missouri, North Carolina, Tennessee and Florida, nine EmpowerHMS-affiliated hospitals are in delinquent tax status, owing at least $1,771,638 in real estate and property taxes. The number isn't exact because of interest, as well as variances in the how parcels are assessed by local governments.

The highest balance is for I-70 Community Hospital in Sweet Springs, Mo., which has a $364,903.97 unpaid local tax bill. Most delinquencies cover multiple years. In one case, at Regional General Hospital in Williston, Fla., taxes have been delinquent since 2011, with $328,786.55 due.

A message left at EmpowerHMS offices seeking comment wasn't returned Friday afternoon. A woman who answered the cellphone of CEO Jorge Perez took a message but said he was out of the office and wasn't expected to return.

Michael Murtha, who often handles the company's media inquiries and is president of the Perez-chaired advocacy group National Alliance of Rural Hospitals, said he could not speak to the specifics of the company's property tax situation. He called the situation "not unheard of and not out of the ordinary," and he said he would assume that there is a plan to get facilities into good standing with their localities.

Murtha said it's common for for-profit hospitals to have unpaid property tax bills, but he did not cite data or research to support that.

News reports of financial problems at EmpowerHMS hospitals -- including late payroll checks, unpaid bills and conflicts with insurers -- have appeared across several states in recent weeks.

In Hillsboro, Kan., the county treasurer's office reports $323,018.97 in unpaid taxes stretching back to 2016 on an EmpowerHMS hospital. The Hillsboro Free Press reported Wednesday that a local bank filed a foreclosure petition on that hospital, just as a last-minute payment stopped the utilities from being shut off.

De Queen and its surrounding area have been shaken by problems at the hospital there, which EmpowerHMS acquired in 2017. The hospital is more than 30 miles from similar medical centers. A recent Arkansas Democrat-Gazette report detailed how community worries are mounting, with some people fearing that the parent company's situation is too dire for operations to continue.

Murtha has often attributed problems at EmpowerHMS hospitals to delayed reimbursements, such as Medicare payments, that were expected after the beginning of this year. In an earlier interview, he said that December -- when payroll checks in De Queen, as well as at EmpowerHMS hospitals in Kansas, Tennessee and Oklahoma, were late -- is often a tough time for rural hospitals.

Of the 13 counties contacted for this article, all of which have hospitals listed on the EmpowerHMS website, nine reported that back taxes were due on the company's facilities. Only one county reported that its EmpowerHMS hospital, Fulton Medical Center in Missouri, was current on its tax bill, with payments totaling more than $80,000 that were made Dec. 31.

The other three facilities were marked as exempt from local property taxes, in two cases because the hospital's physical building was owned by the city or county and was therefore exempt from some taxation. An assessor wasn't immediately available to explain the exemption.

Payments on back taxes are being made via a garnishment structure on Washington County Hospital in Plymouth, N.C., according to an employee in that office. A payment of $15,000 was made in July on the bill for the Sweet Springs, Mo., hospital -- which had the highest tax balance -- to halt its inclusion in a tax sale, said Cindi Sims, county collector of revenue in Saline County, Mo.

Based on local regulations, several facilities in Kansas, Missouri and Tennessee are delinquent enough to be eligible for inclusion in local tax auctions, though processing delays mean it's unlikely that that will happen this year, most offices reported.

Because taxes have been delinquent on the De Queen hospital for two years, if the bill remains unpaid, the Sevier County tax collector's office faces a deadline of July 1 for notifying the Arkansas commissioner of state lands.

A spokesman for the state office didn't return a call Friday afternoon, but a clerk there said that once a delinquent property has been referred, the property could go up for sale at a tax auction after two years.