HIGH PROFILE: Like his ancestors before him, Louis Cella runs Oaklawn, the family business since 1916 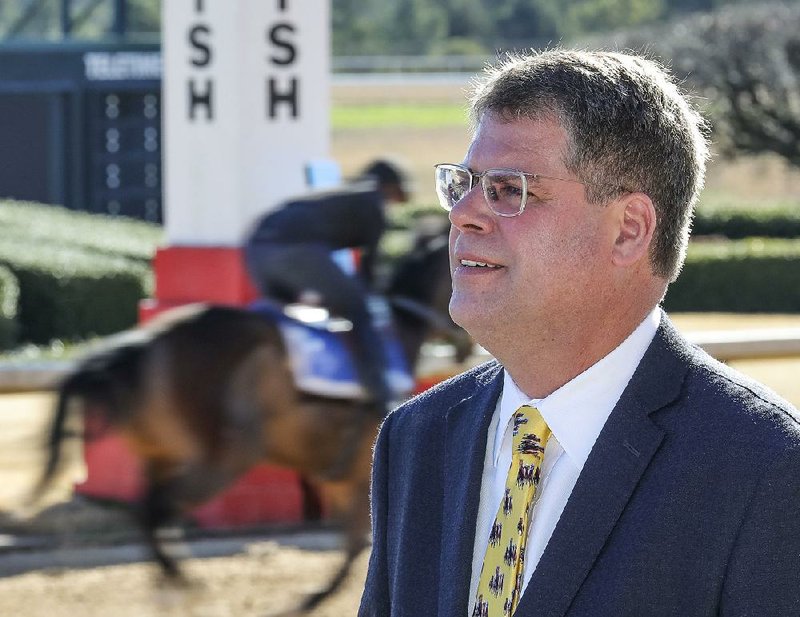 HOT SPRINGS — It’s a little over two weeks from opening day at Oaklawn Jockey Club as a dozen or so horses are put through workouts on the mile-long track. Some trot by lightly while others sprint, jockeys crouched low on their backs, as they get in shape for the 2019 Oaklawn meet, which starts Friday.

Oaklawn President Louis Cella is chatting with trainers and track workers in between getting his picture taken under the clear blue sky of a not-terribly cold January morning.

Since 1916, the Cella family has been at the reins of Oaklawn. That’s when Cella’s great-grandfather, Louis A. Cella, along with great-uncle Charles, became sole owners of the track. With the exception of the years between 1919 and 1934, when the track was shuttered after a ban on pari-mutuel betting, the Cellas have overseen horse racing at Oaklawn.

Louis took over in December 2017, after the death of his father, Charles, who had been president since 1968.

Early on, the elder Cella wasn’t all that anxious to have his son take up the family business.

“He would always encourage us to get out. He would say, ‘Racing’s crazy. Get out of the game,’” Louis says.

Louis obviously didn’t listen, and is now overseeing the largest expansion in the track’s history, as Oaklawn prepares to start construction on a 200-room hotel and increase its gambling area by 28,000 square feet. Plans are to have the extended gambling center open next January, with the seven-story hotel completed by late 2020.

“This is a very dense construction, and we have a very aggressive timeline,” Cella says. “The hotel is a new business for us. It’s a whole new world, and this could really rejuvenate Hot Springs. We have the lakes, the natural springs, the walking paths and bike paths, historic downtown, racing, the gaming and hotel event center. From a tourism perspective, you have it all. In a couple of years, Hot Springs is going to explode.”

Cella — who has a sister, Harriet, and brother, John — grew up splitting time between St. Louis and Arkansas.

Oaklawn was a sort of playground and home away from home. There were sessions of shagging fly balls hit by his father on the track’s infield and “sneaking” into the races as an underage kid.

“We would come down on weekends or on spring breaks,” he says, “You were not allowed at the track unaccompanied by an adult until you were 16. I would hide under dad’s coats and we would sneak in. He loved milking that.”

When he was 12, he took horses on hot walks after races, though he wasn’t exactly a natural.

“Every other step I get stepped on, and the horse is popping me with his head,” Cella remembers. “Walking around the stall, [the trainer’s foreman] would say to let the horse have 10 sips of water — not 11, not 9 — 10.”

Cella is speaking in his office, which was once his father’s. It’s windowless and a bit dark, but well-appointed with horse racing-related paintings on the walls.

“We always were active. We would go out West and ride horses and go on pack trips for a couple of weeks in the summer in the mountains, or go fishing in Alaska.”

During college, Cella interned at the Friday, Eldredge & Clark Law Firm in Little Rock for the late Herschel Friday, longtime counsel for Oaklawn and friend of the Cella family.

“Herschel was a father figure to me, and just a neat, neat individual,” says Cella, adding that it was because of Friday that he attended law school at Fayetteville.

“He said it was a great school and that I would meet a lot of people in Arkansas that I would know for the rest of my life. It would also placate my father. He was right.”

While he passed the bar in Arkansas and Missouri, Cella has never practiced law. Oak-lawn, its horses and business were too much for him to resist.

“It’s always intrigued me,” he says. “I’ve always been involved and active with it. I thought the business side was very interesting. When you look at the dynamic business of horse racing, you have horsemen, the trainers, you have the jockeys, you have the grooms. On the backstretch we have 40 some-odd barns, 1,500 stalls. You see people from all walks of life there, and they all have stories.”

Charles Cella would let Louis sit in on meetings and speaker-phone calls with Friday, accountants, vendors and others associated with track business. Louis was an eager student.

“I was privy to all that at a very young age. Through my father, that’s how I learned all this stuff. You don’t read a book; you either work for a trainer or you’re fortunate enough to have a father or someone like that and you soak it up like a sponge.”

Eric Jackson, Oaklawn’s senior vice president and former general manager, has been with the track for 40 years and got to know Louis as he was starting to learn the family business.

“He’s always reminded me a lot of his father,” Jackson says. “He’s very athletic, very determined and organized. He’s very honest and transparent in everything he does.”

Walter “Skip” Ebel III is a lawyer at Friday, Eldredge & Clark and has represented Oak-lawn since 1995.

“I worked with Louis’ dad for many years,” Ebel says. “He was staunch in his convictions, and Louis has a lot of his characteristics. Lou learned a lot from his dad over the years.”

Ebel notes that the younger Cella also has his father’s decisiveness.

“Just like his father, if you lay out an issue to him he will make a decision and move on.”

In horse racing, you win some and you lose some, and in the late ’80s and early ’90s, when casinos in neighboring states started cutting into Oak-lawn’s action, alternate revenue streams were needed. Simulcast betting on races at other tracks and Sunday racing got state approval, and in 1999 legislation allowed instant racing, which let bettors gamble on previously run races on terminals similar to slot machines.

“It was a novel idea, and we were able to patent it and develop it,” Jackson says. “There’s a pretty good case to be made that it helped turn Oaklawn around.”

Cella traveled to other tracks selling RaceTech before the company was sold a few years ago.

“We pat our back a little bit on this, but when it comes to racing we are cutting edge,” he says. “We’ve done a lot of things that have been breakthroughs in the industry. You take Kentucky, New York, Florida, California — the biggest racing jurisdictions in the world — and they look at us and say, ‘How did Arkansas do that? Let’s copy them.’ That’s a feather in our cap, and a feather in Arkansas’ cap.”

Electronic games of skill are popular in the track’s gambling center, and there is a summer concert series as well, but racing remains at Oaklawn’s heart, Cella says.

“Our focus is racetracks, horse racing and the racing product. We’re comfortable with that, and everything we do is going to be focused on horse racing.”

Ron Marquette has trained horses at Oaklawn for 21 years. Among the 40 or so horses he’s training this year is the thoroughbred Incorrigible, owned by Louis and his brother John Cella (John is also president of the family’s Southern Real Estate and Financial Co. in St. Louis).

“Oaklawn has always been a fixture in the racing community,” says Marquette, whose also trains at tracks like Saratoga in New York and Keeneland Racecourse in Lexington, Ky. “We had some lean years, but the Cellas stepped up. In the last 10-12 years, I’ve seen nothing but improvement with bigger purses, bigger trainers, bigger horses. It’s pretty exciting. It ranks up there with the best in the world.”

Those bigger purses Marquette mentions are a simple but integral part of Oaklawn’s formula, and part of the circle of horse racing life.

If you’ve just noticed that January is almost over and there has yet to be a race at Oaklawn, well, that’s by design. Instead of a traditional start in early January and the Arkansas Derby finale in mid-April, this year’s racing starts later and runs until May 4, hence the track’s “Stay Until May” marketing campaign.

Cella probably doesn’t have to worry too much. With a projected $560,000 daily average purse, jockeys like Joe “Jersey Joe” Bravo, who has won more than 5,000 races, will saddle up regularly at the track this year.

“You put up the money and everybody shows up, right? Looks like you guys are putting it up pretty juicy this year,” Bravo said in a news release earlier this month.

“We have the absolute best fans anywhere. I can attest to that because I’ve gone to most tracks coast to coast, and our fans are the best. They understand the game, they study it, they love it, they know the trainers, they know the horses and they are enthusiastic. We have a responsibility to put on that show for their entertainment.”

To that end, Cella says $11 million was spent during the off-season on improvements to the track and grounds, adding new barns, updating the air conditioning and sprinkler system and the new Larry Snyder Winner’s Circle, which is named for the longtime jockey and steward.

Away from the track, Cella says he and Rochelle, who live in St. Louis, are homebodies. They get to England to visit with her family often and they like to travel. They also both love to cook.

He is vice chairman and director of the St. Louis Municipal Opera Theater and is the past chairman of the Arkansas Cancer Research Center Foundation, director of the University of Arkansas for Medical Sciences Foundation fund board and a member of the advisory board of the Myeloma Institute at UAMS.

As workers prepare the grounds for the new season and jockeys and trainers keep an eye on their stopwatches and the condition of their horses, Cella ponders a question about where he sees Oaklawn a decade or so down the road.

THE BOOK I’M CURRENTLY READING IS: The Machiavelli Covenant by Allan Folsom

THE LAST MOVIE I SAW WAS: The Hundred-Foot Journey

MY FIRST CAR WAS A: Chevy Blazer

IF I COULD TRAVEL BACK IN TIME, I WOULD GO TO: Pre-Castro Cuba

THE GREATEST HORSE RACE I EVER SAW WAS: Bias aside, Northern Spur’s Breeders’ Cup Turf win. It had been raining for a week, the turf was soaked, there were the best horses in the world, and Spur came flying at the 1/8th Pole to win by a nose.

MY FAVORITE CHILDHOOD MEMORY: Swimming off the outer bar in Cape Cod.

I’M MOST COMFORTABLE WHEN: I’m home with family.

GUESTS AT MY FANTASY DINNER PARTY: My great-grandfather, grandfather and father. Four generations of running the same business would make for an interesting dinner discussion.

ONE WORD TO SUM ME UP: Honest 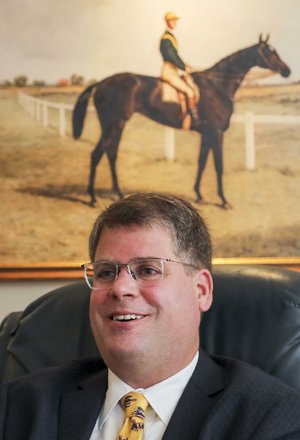 Photo by John Sykes Jr.
A“We have the absolute best fans anywhere. I can attest to that because I’ve gone to most tracks coast to coast, and our fans are the best. They understand the game, they study it, they love it, they know the trainers, they know the horses and they are enthusiastic. We have a responsibility to put on that show for their entertainment.” - Oaklawn President Louis Cella

Print Headline: HIGH PROFILE: Like his ancestors before him, Louis Cella runs Oaklawn, the family business since 1916