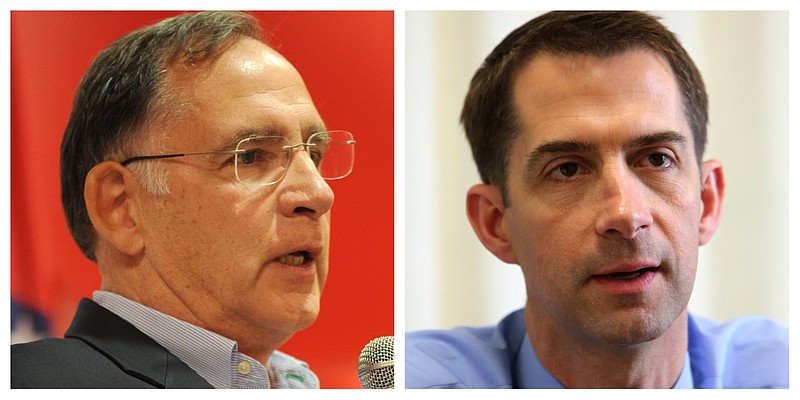 WASHINGTON -- U.S. Sens. John Boozman and Tom Cotton say they'll be looking for opportunities to work with their Democratic colleagues this year.

Despite the government shutdown, both men say they're optimistic that they'll be able to find areas of common ground.

The Agricultural Export Expansion Act of 2017 would have allowed Americans to extend credit to Cubans who buy U.S. agricultural commodities. Then- Sen. Heidi Heitkamp, D-N.D., was the sponsor; Boozman was an original co-sponsor.

Since Heitkamp lost her race for re-election, Boozman predicted Sen. Michael Bennet, D-Colo., will take up the mantle.

Passage of the measure is key to expanding access to the Cuban market, Boozman said in an interview last week.

"What we're going to do is make it where private banks and private entities can provide credit; not the federal government," Boozman said.

There will be plenty of other opportunities to reach across the aisle, Boozman said. He pointed to last year's Farm Bill as an example; the Senate version enjoyed broad bipartisan support in that chamber when it passed in June. The final version was backed by a majority of Republicans as well as Democrats.

Last year's VA Mission Act, which increases access to in-home caregivers and private health care for some veterans, is another example that Boozman cited. It sailed through the House 347-70 and through the Senate 92-5.

Farming and veterans' matters will continue to be areas where consensus can be reached, Boozman said.

"The things I'm going to be focusing on are things ... where really we have a lot of bipartisan cooperation. I think we have the opportunity really to get a lot done," he said.

There may also be room for agreement on infrastructure improvements, he added.

"We can't just think in terms of the three Rs: Road, railways and runways," Boozman said. Internet connectivity must also be a priority, he added.

"If you don't have broadband and things like that, you're not going to be able to grow as a community, grow as an area," he said.

In an interview earlier this month, Cotton said he will also look for opportunities "to work in a bipartisan fashion."

"I know people have measured expectations about [House Speaker] Nancy Pelosi's House working with the Republican Senate, but we'll try to find every opportunity we can to make progress for Arkansans and the American people," he said.

The Republican from Dardanelle said he'll look for ways to lower the cost of prescription drugs and to expand health savings accounts, which allow people to set aside pre-tax dollars to spend on medical costs.

"This happens every year on the defense bill. [The] defense bill usually passes with 80 or 90 votes," said Cotton, who serves on the Senate Armed Services Committee.

"I write about a fifth of that bill as the chairman of the subcommittee overseeing the Army and the Air Force," he said. "Almost every measure I have in the defense bill is something that I worked with to get bipartisan support."

Among other things, the 2005 law required states to place bar codes on driver's licenses that can be read by scanners at airports and other locations. A flaw in the original wording prevented U.S.-based residents of the Marshall Islands, Palau and Micronesia from obtaining multi-year driver's licenses in the 50 states.

Now the issue has been addressed.

"You'd be surprised how many times you can find overlapping areas of interest where you can pass bills that make a real difference," he added.

There will be additional opportunities for bipartisanship as the year progresses, Cotton predicted.

One idea he says he's likely to back: creation of a National Criminal Justice Commission. It would be charged with completing a thorough review of the nation's criminal justice system.

Sen. Gary Peters, D-Mich., sponsored legislation during the last session of Congress that would have created the commission; it passed the Senate on Dec. 22 but didn't make it through the House.

That type of in-depth official study hasn't been completed in 50 years, Cotton said.