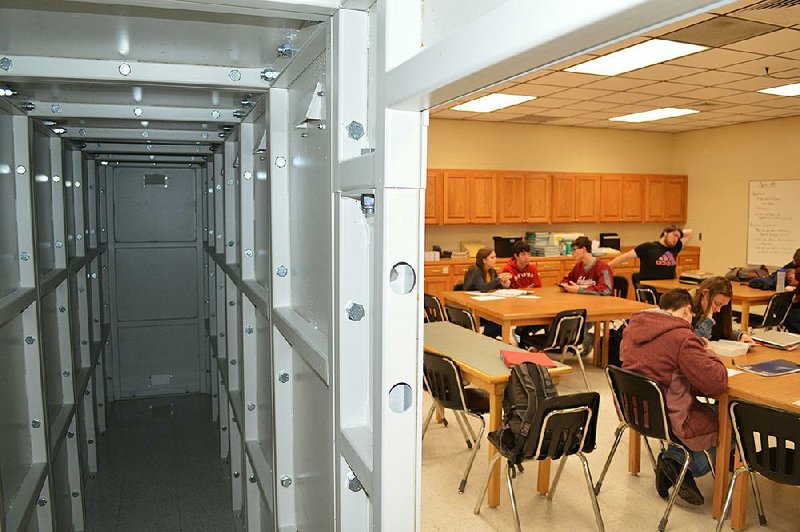 The bullet-resistant safe rooms have become a part of the classroom, providing students the ability to escape to safety in a matter of seconds.

QUITMAN -- In the back of a classroom sits a large steel cube bolted to the floor that from the inside resembles a bunker from the Cold War era.

Quitman School District has installed the tornado shelter/safe rooms in all 53 of its classrooms, becoming the first Arkansas school to do so. Each cube is 34 inches wide from the wall, with the length of the structure depending on the size of the classroom and the number of students in the class.

Superintendent Dennis Truxler said the safe rooms were added to classrooms to protect the district's approximately 700 students from tornadoes and the threat of an active shooter on campus.

Installation of the safe rooms cost almost $1 million, but school officials believe the investment is worth the expense.

"I am buying an insurance policy," Truxler said. "This isn't a guarantee nobody will get hurt, but it will limit it. School is supposed to be a safe place, you know."

Truxler began looking into tornado shelters after storms ravaged parts of Vilonia and Mayflower on April 27, 2014. He came across an article about units being installed in Oklahoma classrooms that served as tornado shelters, and he decided to check them out in person.

Manufactured by Staying Home Corp. in Harrisonville, Mo., and distributed through National Safety Shelters, the cubes were designed and tested to withstand the force of tornadoes with wind speeds of 261-318 mph.

"I toured the factory in Harrisonville and then went and looked at a school that had these units in their district, and I thought they would be perfect for us," Truxler said.

The fact that the units can be upgraded to bullet-resistant status was a bonus. Quitman officials chose to maximize the unit's protection by adding Ballistic Level III military-grade steel, which can resist rounds from semi-automatic weapons like AK-47 and AR-15 rifles.

"This [steel] is used on armored vehicles," Truxler said. "In this day and time, it seemed like a good idea to install a ballistic shield."

School shootings like the one in 2012 at Sandy Hook Elementary School in Newtown, Conn., which left 20 children dead, and the one in 2018 at Majory Stoneman Douglas High School in Parkland, Fla., where 17 people died and 17 others were injured, have led schools across the country to rethink the safety measures used to protect students and faculty.

Brantley said she talked with her students about the new addition to their classroom.

"I told them it was a safe place for storms, and we practiced lining up inside of it and keeping quiet," Brantley said.

She chose not to tell her first-graders the shelters also could be used to protect them in an active shooter situation.

Some teachers have decorated the cubes. There were posters of instruments in the band room. Others included strategies for solving addition problems and pictures used to help students learn their vowels.

"It makes it part of the classroom," Brantley said.

The inside of the structures vary in size. Shelters in the elementary school have enough room for children to sit down, while the ones in high school classrooms appear to be standing-room-only.

"I feel sorry for the people who have claustrophobia," said Gracie Smith, an 11th-grade student. "But I would rather be there than in the wide-open."

Truxler said Quitman's classrooms had plenty of space for the shelters, which he said can come in any shape needed. The shelters have protected air holes on the front side. Doors can be opened from the inside or the outside, and teachers are equipped with steel pins that allow them to lock the doors completely from the inside.

"A couple of days ago I asked a student to try it out," Truxler said. "He had the door open in seconds, and in less than two minutes we had 25 kids in there with the doors locked."

He said noises from the outside can be heard inside the cubes, which allows students and teachers to hear an all-clear sign given over the school's intercom or in person. Cellphone calls also can be received inside the shelters.

"I expect things like this to become the norm in schools," she said. "It's sad, but it is what it is."

Administrators at other schools have taken notice of Quitman's investment.

"I have had superintendents from all over calling me over the past few days asking questions," Truxler said. "This actually cost us less money than building a safe room."

Cheryl May, the former chairman of the commission, said the units installed in Quitman's classrooms weren't something the commission had considered at the time of the report.