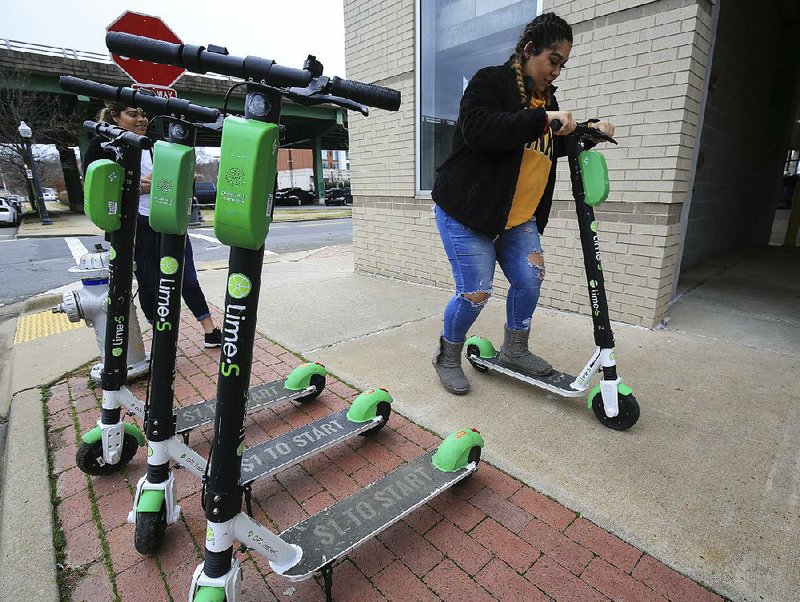 SAN FRANCISCO -- The e-scooter boom began in Santa Monica, Calif., about 16 months ago. Electric scooters, owned by startups looking to mimic the success of ride-hailing companies like Uber, appeared around town. The idea was simple: Use a smartphone app to rent a scooter and then leave it at the end of the ride for the next person.

Soon, people in cities from San Francisco to Paris were complaining that the scooters were all over sidewalks -- usually without the approval of local officials.

In Portland, Ore., city officials worried that they would soon get their own flock of uninvited scooters. So they established a four-month pilot program in July with a limit on scooters and a requirement that companies share detailed data about trips and injuries with city officials.

That data, released by the city's Bureau of Transportation, offers the most detailed analysis of the impact of e-scooters on a city. Scooters often replaced short car trips in Portland, offering some support for one of the biggest selling points the companies have made to communities: They can help reduce congestion and pollution. And the scooters did not lead to as many injuries as some had feared.

On Jan. 8, Little Rock began a six-month pilot program with alternative transportation company Lime. The company said it initially rolled out 50 Lime-S e-scooters in several downtown locations on that day.

Former Little Rock Mayor Mark Stodola -- who left office on Dec. 31, had announced in November that Little Rock had entered into an agreement with the company to start a pilot program. A decision on whether to extend the agreement will be based on whether people like them, Stodola said at the time.

The only restriction in Little Rock?

Scooters must be ridden on sidewalks and river trails. They are not allowed in the streets, according to Little Rock police, citing City Ordinance 32-463.

Lime operates in more than 100 markets on five continents and is the largest shared bike and scooter provider in the United States. It does not provide scooters to any other Arkansas city.

It is not yet clear if scooter companies can comply with different cities' tight and varying limits and still run profitable local operations. The programs often cap the number of scooters and dictate which neighborhoods they ought to be in.

"That is not letting the market determine how many scooters should be anywhere," said Gabriel Scheer, Lime's director of strategic development. "How do you unfetter us in a way that allows us to meet demand?"

Still, Portland officials are using the pilot program to make a big point with startups: It is better to ask permission and work with local regulators than risk being run out of a community.

That has not always been the case among startups trying to get a piece of the so-called sharing economy. Ride-hailing companies like Uber and Lyft and the short-term rental company Airbnb have usually jumped into new markets before local regulators have had time to understand their businesses.

For the scooter startups, not asking for permission has had consequences. After Lime and Bird began to operate without permission in San Francisco, the city instituted a permit system -- but issued permits to only Skip and another smaller competitor, Scoot, effectively locking Lime and Bird out of the city. Some cities have simply impounded the scooters.

"A lot of these companies roll into town, flout local regulations, see what they can get away with and how far they can push cities to accommodate them," said Chloe Eudaly, a Portland city commissioner. "I feel like there is somewhat of a reversal of that trend among these companies, and they are learning that's not necessarily the best way to do business."

Other cities are establishing permit programs to limit the impact of unexpected scooter invasions. Washington, for example, said in November that companies could deploy no more than 600 scooters each, which Bird argued would make it "impossible" to provide full service.

Bird, Lime and Skip received permits to operate in Portland. They handed over a wealth of data about scooter rides, giving city regulators access to information about where each trip started, the route it followed, where it ended and what time of day it occurred. Personal information on riders, such as payment data, was not shared.

Portland capped the number of scooters at about 2,000, roughly divided among the three companies.

Scheer, from Lime, said the cap system made it difficult to determine how many scooters a city actually needed. But he added that the limits forced scooter companies to hone their operations, offer scooters with smoother rides and ensure they were deployed in neighborhoods where they could draw the most riders. And the caps forced the startups to compete on how well they could comply with the city's mandates rather than playing a numbers game.

"We don't think this is a land-grab type of business. This is one where you have to solve problems in a sustainable way," said Sanjay Dastoor, chief executive of Skip. "Having more vehicles on the road isn't going to help if there aren't places where people can ride them and feel safe."

The data that Portland collected allowed the city to assess whether e-scooters live up to their promises of reducing pollution and congestion. According to a citywide survey, 34 percent of residents who used the scooters and took a survey said they had used e-scooters to replace driving their own car or taking an Uber.

City officials also had concerns about accessibility and safety, but saw low rates of injury and will continue to study those issues during a second test run.

Some rules were meant to get the scooters into neighborhoods that could be underserved. One hundred scooters from each company had to be positioned in East Portland, a lower-income neighborhood with poor access to Portland's public transit system. About 6 percent of the city's rides originated in that neighborhood.

Scooter startups didn't always comply with restrictions, according to the report. The scooters often exceeded the speed limit of 15 mph that the city had imposed, and none of the startups completely fulfilled their obligations to deploy scooters in East Portland.

Over the four-month program, Portlanders took 700,369 scooter rides. Nineteen percent of those rides occurred between 3 p.m. and 6 p.m. on weekdays. But it was a small sample size compared with other cities. In Paris, which has no scooter cap, Lime alone provided more than 1 million rides over four months.

When the Portland pilot effort ended in November, all of the e-scooters were cleared off the streets. The city is planning a second, yearlong pilot program in the spring but has not decided how many scooters it will allow, a spokesman said.

"It seemed like a little bit of carnival on our streets for a while, but I think they definitely have potential to make our city easier to navigate for a lot of different people in different ways," Eudaly said.

She even took a ride on an e-scooter. "It was fun. It was easy," she said. 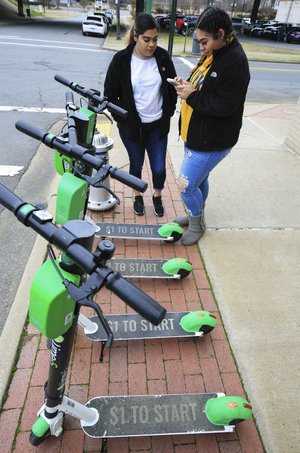 Photo by Staton Breidenthal
Kimberly Rivera (right) and Cristal Martinez use an app on their phones to rent scooters Tuesday afternoon in the Little Rock River Market District.