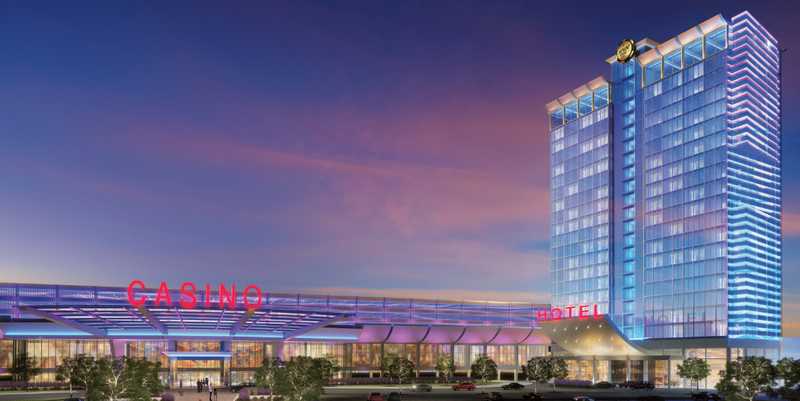 This rendering released by Southland Gaming & Racing shows a planned $250M addition including a new casino complex and hotel.

A $250 million expansion of Southland Gaming & Racing that includes a new casino complex and a 20-story hotel will be announced today in West Memphis, the dog-racing venue's owners told the Arkansas Democrat-Gazette on Wednesday.

Southland's gaming options will be expanded to 2,400 gambling machines and up to 60 live table games, said Glen White, spokesman for Delaware North, which has owned and operated the 63-year-old greyhound racing venue since the mid-1970s. Plans also include sports betting areas.

Privately funded by Delaware North, the project is expected to add about 400 additional permanent jobs to the casino complex and hotel, bringing employment at Southland to about 1,200 jobs. More than 1,500 jobs also will be created during construction, White said.

Lou Jacobs, Delaware North's co-chief executive officer, said in a statement that the project "represents the largest ever investment in a casino in Arkansas and one of the largest for a hospitality project."

"Delaware North is thrilled to make this historic announcement," Jacobs said in the statement.

Gov. Asa Hutchinson and other officials will speak at the event scheduled for 1 p.m. today at the Southland facility in West Memphis.

Constitutional Amendment 100, passed by Arkansas voters in November, allows casino licenses to be awarded to the state's two existing race tracks -- Oaklawn Racing and Gaming in Hot Springs and Southland in West Memphis -- as well as one each in Pope and Jefferson counties. The latter counties now have no legal gambling operations. The Racing Commission is getting rules put in place so applications can be made for casinos in those counties.

"Southland was doing better and better over the past four to five years," White said. "The idea of expansion has been considered for a number of years, but certainly the passage of Amendment 100 made that actionable on this large of scope."

Oaklawn Racing & Gaming announced in November a plan to spend more than $100 million over the next two years to build a 200-room hotel and expand its casino by 28,000 square feet.

Southland's construction project is expected to begin by summer with a 12-month completion timeline for the casino, followed by the hotel six months later, White said.

The new casino complex -- 113,000 square feet when combined with existing space -- will include a larger buffet, steakhouse restaurant, coffee shop and a new food hall. A new player lounge and center, lobby and steakhouse bars will be added.

The 20-story hotel tower will feature 216 standard rooms and 72 corner suites and will be topped off with 12 penthouse suites.

A new covered parking garage will add 1,250 parking spots. Surface parking will be added in the coming months to offset spaces lost during construction.

"We have long been committed to Southland, Arkansas and West Memphis, investing more than $100 million in the venue since 2006, and look forward to creating the state's and Mid-South region's premier casino," Jacobs said in a prepared statement. "On behalf of my father, Delaware North Chairman Jeremy Jacobs, and our family, as well as our Delaware North and Southland associates, we are grateful to the people and leaders of the state of Arkansas for the opportunity to make this new investment."

White said Delaware North will continue to invest in the West Memphis facility. Future plans include a major conference and meeting facility. Possibilities will also be explored for the area underneath the racing tracks.