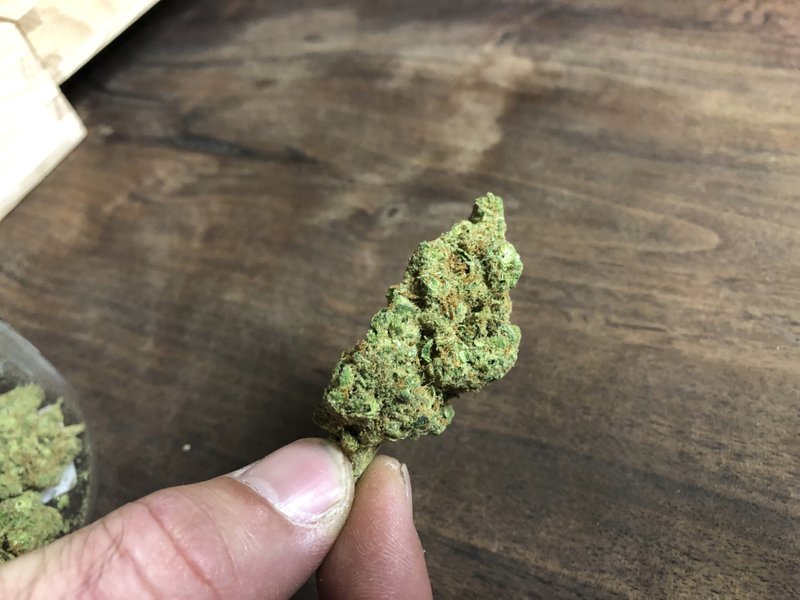 In this Nov. 30, 2018 photo, medical marijuana dispensary owner Chance Gilbert displays some of the marijuana he's grown at the Oklahoma Roots dispensary in the bedroom community of Shawnee, about 40 miles east of Oklahoma City. The roll out of statewide medical and recreational programs typically is a grindingly slow process that can take years. Not so in Oklahoma, a Bible Belt state that moved with lightning speed once voters approved medical cannabis in June, 2018. (AP Photo/Sean Murphy)

An owner of one of Arkansas' first medical marijuana growing companies provided conflicting information about his residency in his applications for cannabis licenses in Arkansas and Colorado, state investigators found.

Robert DeBin, who owns a 4.46 percent stake in a White Hall cultivation facility, Natural State Medicinals Cultivation, claimed that he'd been an Arkansas resident for the past seven years in a portion of Natural State Medicinals Cultivation's application for a growing permit that was notarized on July 31, 2017, according to an Arkansas Alcoholic Beverage Control Enforcement Division violation report.

However, DeBin also claimed five months earlier that he was a Colorado resident in an application for an occupational license in Colorado's marijuana program, the report said.

DeBin's residency discrepancy has already been made public in this newspaper and court filings, but the Alcoholic Beverage Control Enforcement Division began formally investigating after it received several protest letters from unsuccessful cultivation license applicants noting the discrepancy.

The investigators generated a report on the matter, which the Arkansas Democrat-Gazette obtained through a public-records request, and it has been submitted to Alcoholic Beverage Control Administration Division Director Doralee Chandler for possible action.

Under the agency's rules, a cultivation company could be fined up to $5,000 or have its license suspended or revoked if found to have made "false material statements" to the Arkansas Medical Marijuana Commission during the application process.

DeBin, who is also president of the Arkansas Cannabis Industry Association board, didn't respond to a request for comment on Thursday afternoon.

"[Agency] Director Doralee Chandler is currently reviewing the violation investigations," Hardin said in an emailed statement. "Following this review, she will determine whether to move forward with violations. Based on the status of the review, we anticipate decisions will be reached by the end of next week."

The Alcoholic Beverage Control Enforcement Division received about a dozen protest letters from unsuccessful cultivation applicants after the first five licenses were awarded in July. The letters ranged from complaints about the Medical Marijuana Commission's application scoring process to those about DeBin's residency.

The agency declined to investigate those complaints related to the scoring process or individual scores, but it investigated a handful of complaints against licensees.

Investigators couldn't substantiate claims that Delta Medical Cannabis Co. of Newport embellished the credentials of two of its growing experts.

Investigators also submitted a report to Chandler regarding one unsuccessful cultivation applicant's distance to the nearest school.

In the letters challenging DeBin's residency claims, the protesters also questioned whether DeBin and two other owners of Natural State Medicinals Cultivation had submitted sufficient proof of residency because they submitted residency affidavits.

The Medical Marijuana Commission asked for two sources of documentation from five categories to prove residency, and residency affidavits weren't included in those categories.

Arkansans approved Amendment 98 to the Arkansas Constitution in 2016, making Arkansas one of 33 states with comprehensive medical cannabis programs.

One cultivation facility has begun growing the drug, and the other four groups, including Natural State Medicinals Cultivation, are in varying stages of construction.

State regulators are in the process of issuing the first 32 dispensary licenses, and they expect the first seller to open for business in April.