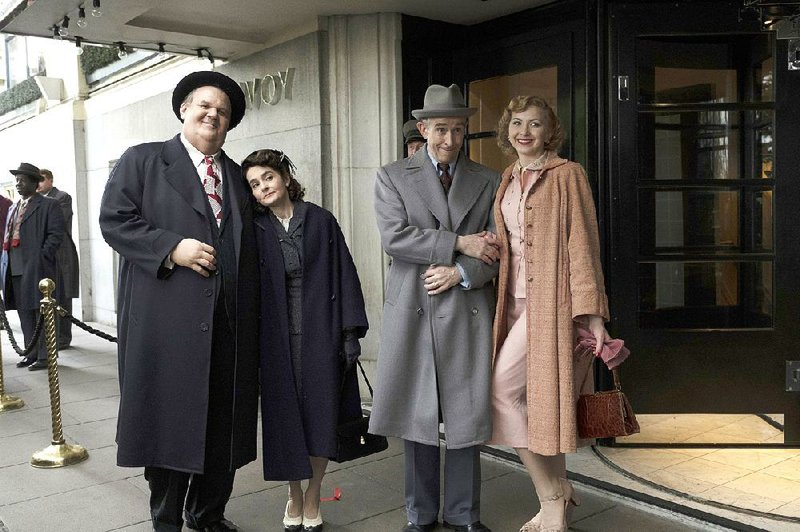 For a time, Stan Laurel and Oliver Hardy were arguably the biggest movie stars in the world.

Unlike a lot of their peers, they successfully negotiated the movies' transition to talkies, and unlike Buster Keaton, Charlie Chaplin and Harold Lloyd, their talking pictures are generally considered better than their silent efforts. Over a 30-year span ending in 1951, they made 106 films of various lengths together (their 1932 film The Music Box won the first-ever Academy Award for live action short).

Rating: PG, for language and smoking

Yet by the early 1950s, they were struggling. Well, relatively struggling. While they were well-compensated during their prime years, their contracts with Hal Roach paid them a flat fee, which means they had no cut in the televised reruns of their works. And movie audiences had moved on to other comic duos, such as Bud Abbott and Lou Costello (who specialized in fast-paced repartee rather than slapstick) and Dean Martin and Jerry Lewis.

Each of them had led untidy personal lives -- Hardy was a gambler with a big alimony nut, while Laurel had three ex-wives, one of whom he divorced twice. They needed revenue streams.

Jon S. Baird's charming, affectionate and fact-based Stan & Ollie focuses on a final tour of the U.K. that began in 1953 in which the duo find themselves staying in three-star hotels and playing to half-empty houses in the second-best theaters in places like Liverpool, Manchester and Birmingham while waiting for the particulars of a new movie to come together. (This final tour is a composite of three tours the duo embarked on after World War II.)

We first meet the duo when they're riding high in 1937 during the shooting of Way Out West, with Stan (Steve Coogan) lobbying Ollie (John C. Reilly) to join him in demanding a new and better contract (and artistic control of their films) from impresario Roach (a blustery Danny Huston). Ollie -- known to his friends as "Babe" -- is reluctant because Roach has shrewdly staggered the stars' contracts so they're never up for renewal at the same time. Stan is a free agent but Ollie is still under contract and needs the money. Nevertheless, Stan is certain his co-star will join him if he walks and that Roach will cave in because "You can't have Hardy without Laurel."

But when Stan makes his ultimatum, Roach doesn't blink. Ollie doesn't break his contract and makes Zenobia (1939) with Harry Langdon as his comic partner. The film is such a disaster that the studio has trouble even booking it in theaters. Stan sues Roach but eventually drops the suit and returns to the fold; Laurel and Hardy make another couple of pictures for Roach before moving on to 20th Century Fox in 1941 and Metro-Goldwyn-Mayer in 1942. Both Stan and Babe have unresolved issues stemming from the dispute.

Yet in 1953, their friendship is intact and genuine, although their interests diverge. And while the problems will with Chekhovian certainty resurface, it's not the arguments that drive this film, but the deep partnership between two very different sort of men.

Babe is a trouper, but Stan is a driven perfectionist, the duo's creative engine, always writing and refining skits. Babe is a natural talent, possessed of a clear tenor voice and a remarkable nimbleness that belies his 300-pound frame (Reilly wore a special air-cooled fat suit for the role, dragging around an extra 100 pounds) but he trusts Stan to handle the business end of things. He's looking forward to the arrival of the duo's wives.

As well he should be -- in their later lives both Stan and Babe found marital bliss with, respectively, the Russian Ida Raphael (Nina Arianda) and Virginia Jones (Shirley Henderson). When the women arrive they kick the movie up a notch or two, as Arianda -- best known for her role in the Amazon Prime series Goliath -- and Henderson exhibit exquisite comic timing. One almost wishes for a movie made from their perspective.

I say almost because the real reason to see Stan & Ollie is the remarkable performances of Coogan and Reilly. Not only for the way the makeup artists have managed to transform them into reasonable facsimiles of the icons, but for the way they capture the nuances of the team's timing. Some of the the team's famous routines are re-created and at least one is subverted: After struggling to drag a steamer trunk to the top of a railway station staircase, it slides down to the bottom, an echo of the piano-moving routine in The Music Box.

"Do we really need that trunk?" Babe asks with a world-weariness of Indiana Jones reaching for a revolver to dispatch a flashy swordsman.

Reilly, charged with replicating Babe's shocking Hippo-in-a-tutu grace, has the showier role, but Coogan, known for his acerbic characters, finds a way to convey intelligence and steel while retaining a gooey center -- his love for his partner is real.

While there are some remarkable moments in the film -- an early tracking shot through the soundstage where the pair are shooting goes far to establish the essential artifice and wonder of the work these guys have taken on -- Stan & Ollie is a modest-feeling film that modulates within a fairly narrow band of warmth and generosity. It is made to comfort and assure. It captures in amber a lost world before the throb of sensation seemed all important, when a half-filled house was not a disaster, only an occasion for a more intimate kind of exchange between performer and audience.

This was the world as it repaired itself after a suicidal war, before rock 'n' roll, when television was still a novelty. Stan & Ollie offers us a glimpse of the old vaudevillian dinosaurs fretting and strutting as the pop asteroid approaches. 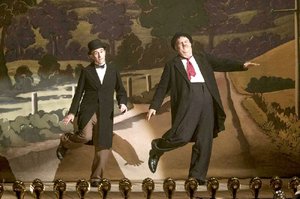 Stan Laurel (Steve Coogan) and Oliver Hardy (John C. Reilly) dust off their old vaudeville act for one last tour of the U.K. in Jon S. Baird’s Stan & Ollie, a gentle look at an enduring partnership.