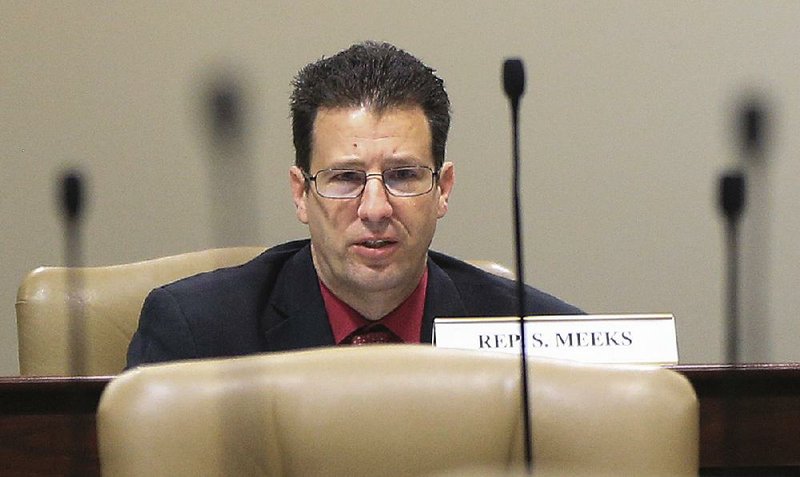 Rep. Stephen Meeks, R-Greenbrier, is shown in this file photo.

Legislation to create a set of standards for the microchipping of employees -- a move described as a "pre-emptive" action by the bill's sponsor -- was passed Thursday by the House 84-4, sending the bill to the Senate.

Holding up printouts of news articles that describe "thousands" of people in Sweden volunteering to have microchips implanted under their skin, and reporting on a company in Wisconsin that was experimenting with the practice, Rep. Stephen Meeks, R-Greenbrier, said lawmakers should create rules to protect workers before the trend comes to Arkansas.

Meeks' legislation, House Bill 1177, sets up several rules for the practice of microchipping employees. The law would require that workers have an option to decline being microchipped, and that if they elect to have chips implanted, they can later request that they be removed at any time.

Employers also would have to disclose to their employees what data are carried in the microchip, and how they may be used. Employers would be required to pay the full cost of implanting or removing the microchip.

Meeks said he was unaware of any companies in Arkansas planning to implant their workers with chips.

According to a National Public Radio story, which Meeks referred to in his floor speech, rice-size microchips implanted in a web of skin next to the thumb are being used by Swedes to swipe for entry into their homes, workplaces and even into subways.

Meeks said the microchips gaining popularity do not have GPS technology that employers could use to track users outside the workplace.

Asked why not propose legislation to simply ban the practice, Meeks said such a ban could be overruled by the courts, leaving the state with no protections.

Meeks, who is chairman of of the Joint Advanced Communications and Information Technology Committee, said he has no plans to implant himself with a microchip.