These 10 films stand out in Sundance festival lineup 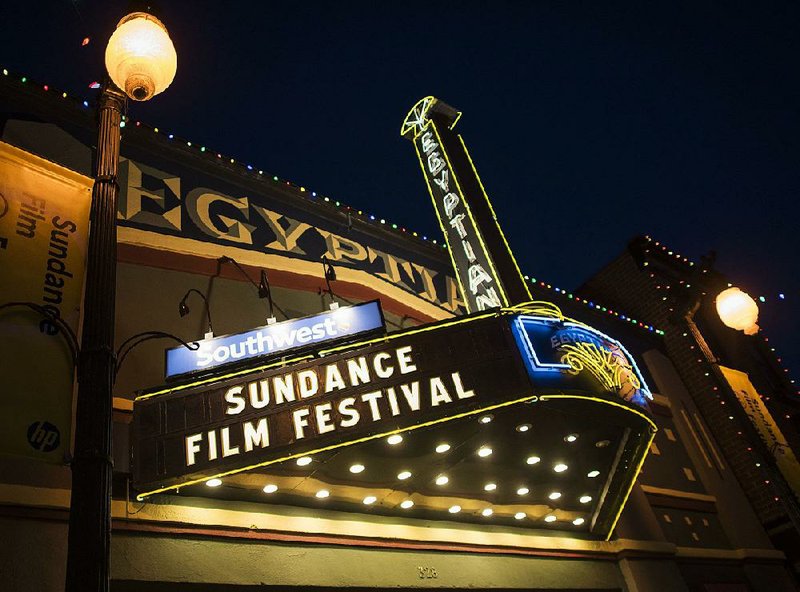 In this file photo, the marquee of Park City, Utah’s Egyptian Theatre is lit up for the first night of the Sundance Film Festival. The festival kicked off Thursday night.

The first official title listing for Sundance comes at the end of November, with the schedule for the 112 features released soon after. Scheduling any film festival is daunting; for Sundance, it's even more so because of myriad factors, some obvious (two films you want to see playing at the same time; the distance between certain theaters in Park City), some more personal (how many midnight movies can you possibly take in and not be undead by the end of the week?).

The first couple of years I attended, I scheduled as meticulously as for any other festival, with precise time given between screenings, and emphasis on the dramatic competition films. I spent hours over the course of days fine-tuning it, honing it and factoring in time to dash over to the good burrito place before getting back in line. The trouble was, Sundance cares not for your fastidiousness and organization: Sundance does what Sundance does, and you are either hip to that fact, or you will suffer crippling Fear of Missing Out.

Here's the thing: By the time the Toronto International or the New York film festivals take place, films have already played Cannes, and the Berlinale. There have been critics present to render their verdicts, you've gotten the buzz on several of the must-sees of the festival and you can plan accordingly. At Sundance, no one knows much of anything. Nearly all of the lineup is making its world premiere at the festival, and even if you are familiar with the director, or an actor or two, there are absolutely no guarantees.

In Park City, the film's premiere is almost always a public event the night before the press screening, which means until that happens and the priority press have gotten a load of it, you have no idea what might work and what won't. What this means is two days into the festival, you have already heard about a dozen "stunning" films you idiotically didn't plan to see and there are several you had high hopes for that sound dead in the water.

Naturally, you might disagree with the initial consensus, but if you're paying attention to social media, you certainly learn the films you'd better plan on seeing if you want to be comprehensive. After a couple of days of this, my masterpiece of organizational clarity would be left in tatters, as I reworked everything to catch those films I hadn't considered before.

Finally, a couple of years ago, I wised up: I stopped spending days planning everything out and went with the idea of looseness and flexibility, giving myself all sorts of freedom to make adjustments on the fly. It's the only way to approach this tiny mountain town and not come out with a series of nervous tics.

This year there are 112 features playing in Park City, here are 10 I'm (preliminarily) excited to check out:

Clemency: A prison warden (Alfre Woodard), worn out from the job of putting prisoners to death, and drawn farther and farther away from her husband, responds to one prisoner on death row in a way that forces her to confront her own sense of self, and the entire idea of justice, in Chinonye Chukwu's second feature. It has been too long since the hugely gifted Woodard has been featured in a leading role, and the film sounds perfectly of its time.

Extremely Wicked, Shockingly Evil and Vile: We've finally hit the moment when pretty boy Zac Efron has traded in his rippling abs and sparkling eyes to try something altogether different and dank. You want a darker role? Try Ted Bundy on for size. The story of the notorious serial killer is here, told through the eyes of his innocent wife (Lily Collins), a woman who not only doesn't know the truth about her husband, but thinks she has actually landed a wonderful partner.

The Hole in the Ground: One of the chief jobs at Sundance every year is to determine the horror film of the festival. This requires a fair sampling of the creepy-sounding wares; it's where those midnight screenings often come into play. Lee Cronin's film, about a mother whose son disappears into the woods one night, only to reappear some days later as a slightly different version of himself, could well fit the bill.

Imaginary Order: A woman (Wendi McLendon-Covey) whose own family life is unraveling becomes obsessed with a neighbor's family near her sister's house in another town in Debra Eisenstadt's offbeat comedy -- there's generally no other kind at Sundance.

Late Night: Fans of The Office (and The Mindy Project) have long appreciated Mindy Kaling's sharp writing and warm wit. This film she wrote, about an aging talk show host (Emma Thompson) who hires Kaling as the lone female and person of color for her writers' room, feels like another winning vehicle for her particular style.

The Lodge: Remember that horror quest from before? Here's another possibility (and we're not done yet), with Veronika Franz and Severin Fiala's film about a pair of young siblings who resent their father's young girlfriend, but are forced to spend days alone with her after their house is snowed in with their father off to the city at work. Apparently the woman (Riley Keough) has a dark, religious past, and things take a turn for the macabre.

Memory: The Origins of Alien: A few years back, I got to take in Room 237, a brilliant documentary about the absorbing intellectual devotion some fans took to Stanley Kubrick's The Shining. This documentary, about the creation of Ridley Scott's masterpiece Alien, is no mere "making of" featurette. Instead, director Alexandre O. Philippe takes a deep dive into the mythology of the film, the connection between screenwriter Dan O'Bannon and conceptual artist H.R. Giger, and the manner in which the movie has pervaded contemporary culture.

The Nightingale: And our final entry in the horror sweepstakes (that is, unless I hear otherwise), Jennifer Kent's new film concerns a young woman in 19th-century Tasmania, who enlists the help of an emotionally damaged aboriginal man in tracking down the brutal killer of her family. Kent's wonderful The Babbadook premiered at Sundance back in 2014, and this film (which actually premiered at Venice last year to critical acclaim) sounds as if she's back in her wheelhouse.

The Report: After 9/11, the United States controversially endorsed "enhanced interrogation techniques" to extract what they thought was necessary intel in their "war against terrorism." In the aftermath, a senate staff member was assigned the difficult task of investigating the CIA's illegal program only to have his report held up by the agency and the White House to obfuscate the truth. With a heavy hitting cast, including Adam Driver, Annette Bening, Maura Tierney, Tim Blake Nelson and John Hamm, Scott Z. Burns' drama reveals the lengths a government will go to protect itself from the truth.

Velvet Buzzsaw: The art world turns aflame when a treasure trove of an unknown dead artist's work emerges, whipping a blizzard of agents, collectors, critics and curators into a frenzy. With a strong cast (Toni Collette, Jake Gyllenhaal, John Malkovich, Rene Russo), Dan Gilroy's film, a follow-up to Nightcrawler (which also starred Russo and Gyllenhaal), sounds well-pitched. The art world is all too easy to mock, but this sounds like it has a deeper agenda to explore.

Print Headline: These 10 films stand out in Sundance festival lineup