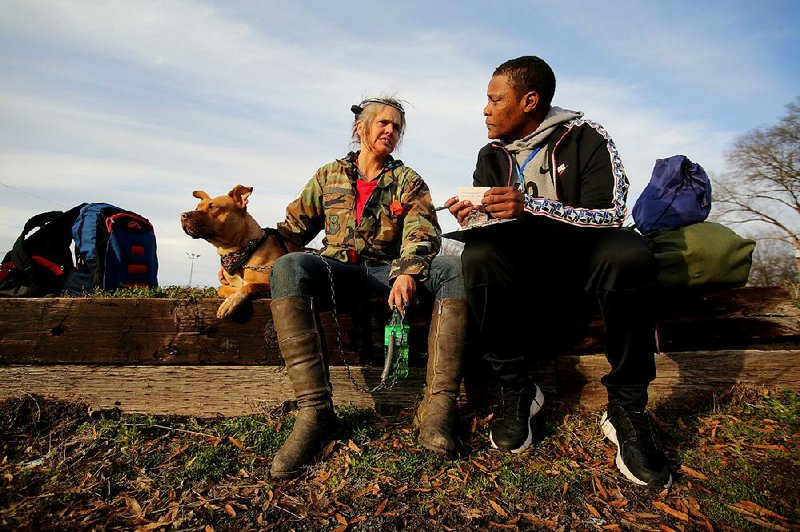 Volunteer Kris Smith talks with Christina Krapf as she sits with her dog, Rico, during Thursday’s biennial count of homeless people in central Arkansas. Krapf, a homeless veteran, was interviewed at the Little Rock Fire Department’s Station 13 on Roosevelt Road.

Kevin Teer leaned forward on his bike, talking to Victor Moya on Thursday. Moya took notes about how long Teer had been homeless, his living conditions and his age.

Teer, 43, had a whiteboard strapped to his back that read, "Homeless will work for food, anything will help. GOD BLESS."

They were at the Little Rock Fire Department's Station 13, participating in the 2019 homeless census, conducted every two years across the nation.

Formally known as the point-in-time count, Thursday's census-taking counted the number of homeless people and got some demographic information -- such as age, race, veteran status and whether the homeless people have children -- on the population in central Arkansas.

The full count is biennial, and a partial count occurs during even-numbered years. The U.S. Department of Housing and Urban Development mandates that regional groups report the results of their point-in-time counts to the federal government. The counts help HUD determine how to dole out its grants to homelessness-service providers.

Teer has been homeless about eight months, he said, and Moya, 69, has been a member for six months of the Arkansas Homeless Coalition, a group that meets monthly to find solutions to homelessness. 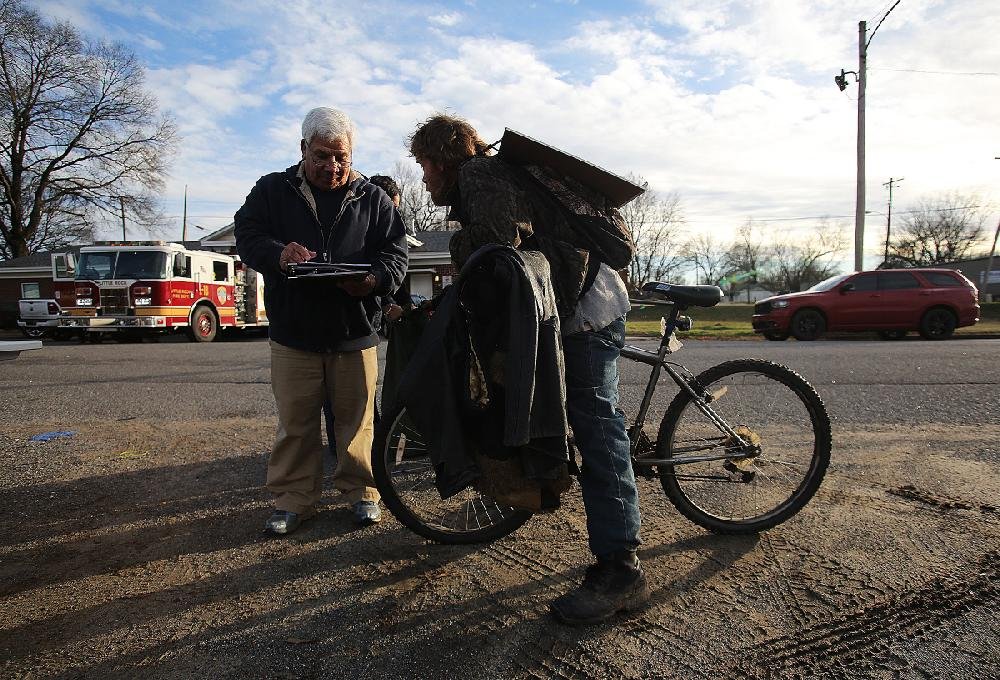 Volunteer Victor Moya jots down information from Kevin Teer while conducting a count of homeless people Thursday on Roosevelt Road in Little Rock. Moya and other volunteers assisted providers of homeless services in the biennial census in central Arkansas.

More than 50 volunteers went to locations around central Arkansas to help with the count Thursday, which was scheduled to last for 24 hours, according to a news release.

Allen, who is a social worker at the Veterans Day Treatment Center in Little Rock, said the count helps her learn what services the homeless population needs and the best ways to connect homeless people to those services.

"I guess we have a lot more work to do to educate and to help," she said. "There's a great need."

HUD also gives an annual report to Congress based on the count. The 2018 report showed that Arkansas' overall homeless population jumped 9 percent.

Groups of local-level providers, known as continuums of care, conduct the full count of the nation's homeless population during the last 10 days of January. Arkansas has six continuums in different regions. The Central Arkansas Team Care for the Homeless (CATCH) includes Lonoke, Prairie, Pulaski and Saline counties.

The largest continuum is the Arkansas Balance of State, which included the Boone, Baxter, Marion, Newton Counties continuum last year.

The last full count in 2017 showed that there were 990 people who are homeless in central Arkansas and that just over half lived outdoors. In 2018, a partial census of homeless people staying in shelters counted 531.

Some homelessness experts have said the homeless population may be undercounted. Most counts don't include people who are "doubling up" or staying with friends and relatives, because the HUD definition of homelessness doesn't include that population.

But the Arkansas Department of Education includes children who are doubling up when reporting the number of homeless students. The HUD definition was last updated in 2012.

In Washington and Benton counties, the point-in-time count includes schoolchildren and people who are doubling up. Kevin Fitzpatrick, who oversees the count, said in a previous interview that he compiles two numbers. One is reported to HUD and the other is a comprehensive number given to service providers so they have a better understanding of what is happening in the region.

The comprehensive number from the 2017 Northwest Arkansas census showed that there were 2,951 homeless people in Benton and Washington counties -- 484 more than the total reported to HUD for the entire state.

Little Rock officials and advocates for homeless people have said they are trying to improve the central Arkansas census-taking. City Manager Bruce Moore said in a previous interview that a couple of officials went to Chicago to learn more about how to conduct such counts.

Kathy Webb, city director for Ward 3 and a member of the Arkansas Homeless Coalition, organized a meeting with city officials, advocates and Fitzpatrick early last year.

This year's count will provide the baseline regarding a promise to cut street homelessness by 25 percent in Ward 1 by 2020. Ward 1 includes parts of downtown and northeast Little Rock.

In November, the city partnered with the Institute of Global Homelessness, a Chicago group, to accomplish the goal.

The institute works with cities around the world to end street homelessness and is affiliated with Chicago's DePaul University and DePaul International. Little Rock was the ninth "vanguard city" worldwide and the second in North America to partner with the group.

In December, Little Rock announced that it had "effectively ended" veteran homelessness. Earlier in the year, former Mayor Mark Stodola said the city had reached "functional zero" for homeless veterans, which means that service providers know who is a homeless veteran and have the capacity to house them quickly.

Little Rock is one of 64 cities in the country with this status, according to the Central Arkansas Team Care for the Homeless news release.

Teer's domestic partner, Christina Krapf, is an Air Force veteran. The two live in a tent under an overpass with their dog, Rico. Krapf said the count helped her connect with the veterans center, and she's hopeful they can find housing.

Moya is also a former member of the Air Force. He said that helped him feel connected to the couple.

"You read about these things, but when you encounter them, it's totally different," Moya said at the end of his interview with Teer.