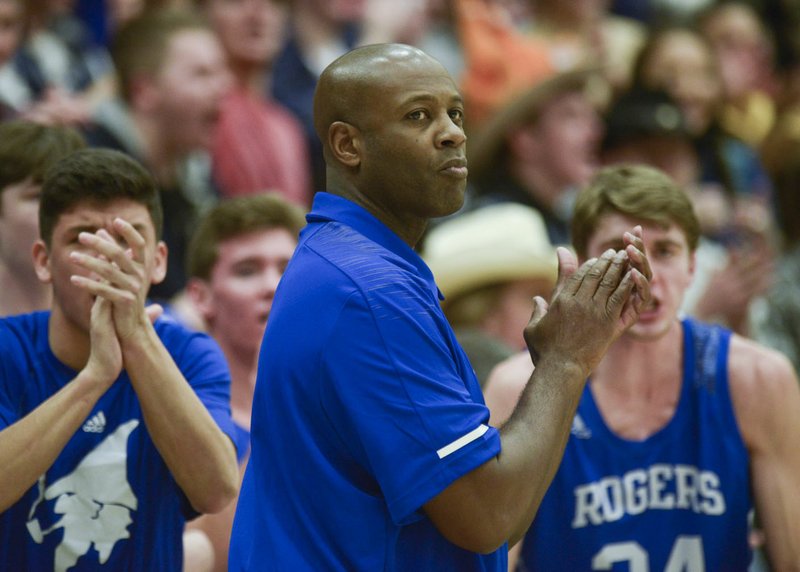 ROGERS --Rogers High started 6A-West Conference play by wiping out a 28-game losing streak and the Mounties finished off the first half of league play with a hard-fought 51-43 road win over crosstown rival Rogers Heritage on Friday night at War Eagle Arena.

A slow start in front of a vocal crowd was also all but forgotten as the Mounties took control early in the fourth quarter and made enough free throws late to secure the victory.

Rogers (15-4, 5-2) fell behind 10-0 to start and didn't score for the first six-plus minutes, but came back with a strong second half. The Mounties made four of first first shots to start the third quarter to extend a 1-point halftime lead to six. Heritage (7-12, 2-5) pulled within one early in the fourth quarter on Jason Kimball's 3-pointer.

But Rogers responded with a 9-3 spurt capped by Karsen Uecker's 3-pointer from the corner to push the lead to 46-38 with less than four minutes left.

"It was kinda par for the course for us," Rogers coach Lamont Frazier said. "We knew they would come out and play. I was just hoping it wouldn't get too bad, too quick. I'm proud of how they stayed in there and fought through that tough time."

The Mounties struggled again from the free-throw line, but made 5 of 10 in the final 1 minute, 51 seconds to put the game away.

Drew Miller and Elliot Paschal led a balanced scoring attack with 10 points each for Rogers, while freshman Will Liddell chipped in nine. Kimball led all scorers with 12 for Heritage, while Logan Clines added 10.

"We kinda broke down defensively and didn't stay focused on what we do," Olsen said. "I give Rogers a lot of credit. They executed well and shared the ball late and got some quality shots that we weren't getting."

Frazier said he expected the team to perform well and is proud of his team's effort to this point, but he's looking for more.

"Just looking at records, wins and losses we would have expected it, but I still think there's a lot of basketball left for us to be better at, obviously just looking at some of the things tonight," Frazier said. "They deserve credit for what they've done, but let's not get ahead of ourselves because we've got a lot left."

Connor Deffebaugh had 16 points to lead four Bentonville players in double figures as the Tigers knocked off West in Tiger Arena.

The Wolverines pulled within 29-27 on Dawson Bailey's 3-pointer with 4:52 left in the third quarter, but Deffebaugh's 3-point play and back-to-back 3-pointers by Josh Smith helped the Tigers extend their lead back to double digits. Michael Shanks then scored 8 points in the fourth quarter, and two Deffebaugh free throws gave the Tigers their biggest lead, 55-36, with 4:14 remaining.

"I thought our guys made some big plays, but it was the balance of our scoring," Bentonville coach Dick Rippee said. "You can't focus on just one person, and even Josh Smith or Sawyer Price or Thane Spencer -- those guys, we feel like, can come in and do some things offensively.

"I don't think any of our guys are out looking for baskets. I think they are just playing and letting the game come to them. Our guys are doing a great job of being selfless and making the extra pass."

Shanks and Colton Simmons finished with 13 points apiece for Bentonville, while Freeman chipped in 11. Bailey was the only West player in double figures with 26.

The Bulldogs hit clutch free throws down the stretch to hold off upset-minded Har-Ber to remain unbeaten in the 6A-West.

Fayetteville (16-3, 7-0) had four players in double figures, led by senior guard and Central Arkansas signee Collin Cooper, who scored 20. Cooper and Connor Barnett each hit clutch free throws in the final 15 seconds for the Bulldogs. Brothers Tamaury Releford and Isaiah Releford scored 19 points each for Fayetteville.

Har-Ber (7-10, 3-4) rode the hot shooting of junior guards Nick Buchanan and Lawson Jenkins. Buchanan scored a game-high 29 points, including 14 in the fourth quarter, and Jenkins scored 18 of his 25 points in the first half.

"Tamaury and Isaiah were both huge for us tonight," Fayetteville coach Kyle Adams said. "We scored enough points, but I didn't think we guarded very well. A lot of that had to do with Buchanan and Jenkins. They were able to score the ball."

The game was tied at 36-36 at halftime, but Fayetteville was able to work inside to the 6-foot-7 Tamaury Releford in the second half, and the sophomore scored 15 in the final two quarters.

Har-Ber pulled within 75-71 with under 10 seconds left when Buchanan drove to the basket and was knocked to the floor. Buchanan was injured and left the game, and his replacement Aaron Oliger hit just one of two free throws to make it 75-72 before the Bulldogs sealed it with Cooper's free throws.

Both teams will be off Tuesday night as the 6A-West is idle. Conference play will resume next Friday as the second half of 6A-West play begins.

Sophomore guard Gary Phillips played more like a seasoned upperclassman Friday night, scoring eight of his team-high 14 points in the fourth quarter, including two free throws to put the game away with 5.9 seconds left.

"I knew coming down the stretch I just had to keep a level head, because I knew if I let things get out of hand, Springdale would run with it," Phillips said. "Coach trusts me with the ball, so I just had to take advantage of it at the end. I didn't want to let me team down, I had confidence, and was able to make the shots."

Springdale senior Vincent Mason led all scorers with 21 points, including 12 in the second half, but the Bulldogs (9-9, 3-4) were playing catch-up all night.

Van Buren jumped out to 12-6 first quarter lead and never trailed in the first half. The Pointers began the second quarter on a 5-0 run to go up 17-6, only to see Springdale finished the quarter on a 13-2 advantage, including an ally-oop dunk from Jajuan Boyd to Mason, sending the teams into the half tied at 19-19.

Springdale retook the lead at 32-30 on a Mason 3-pointer. After a pair of Pointer free throws from Phillips, Mason drained another triple for the Bulldogs to put them ahead 35-32 with 4:34 to play.

Phillips capped off a 6-0 Van Buren spurt with a layup and a 38-35 lead with just over two minutes left. Mari Newton scored a pair of buckets for Springdale to knot the scored again, at 40-40 with a minute to play.

Phillips then kissed one off the glass to put the Pointers ahead 42-40 with 18 seconds remaining. After Springdale was whistled for traveling with six ticks left, Phillips was fouled and sank both free throws.