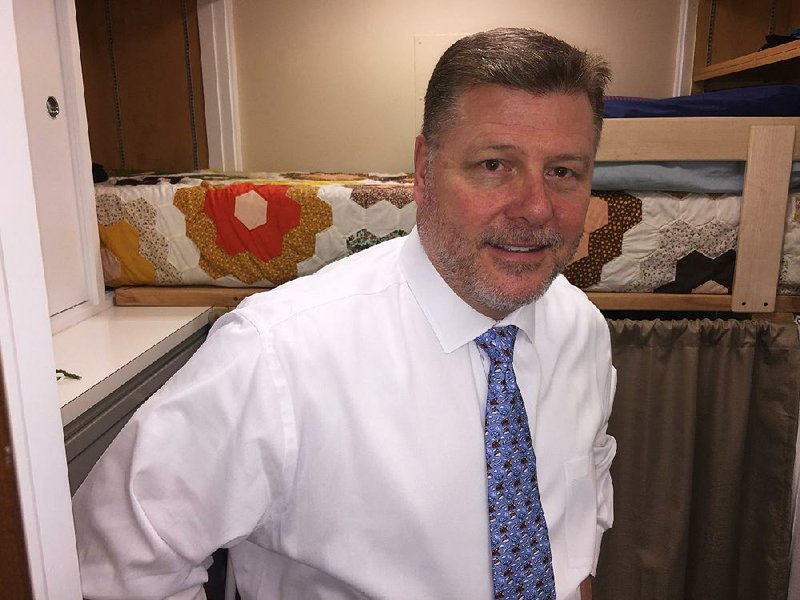 WASHINGTON -- In a city where the cost of living is high, many Republican lawmakers save money by sleeping in their offices.

But with Democrats now in the majority in the House, there's talk of prohibiting such overnight stays.

They've been living a spartan but rent-free existence on Capitol Hill for years.

Rep. Zoe Lofgren, D-Calif., chairman of the Committee on House Administration, recently asked the Architect of the Capitol to calculate the fair market value of the office lodging, McClatchy Newspapers reported this month.

It's a topic she plans to take up with her panel at some point this year.

Rank-and-file House members make $174,000 per year. But rent in the District of Columbia is high. A typical one-bedroom apartment costs $1,996 per month, according to RENT Cafe, an Internet listing service that monitors that sort of thing. Rent near Capitol Hill is reportedly even higher.

The sticker shock is staggering for some newcomers.

"I had an apartment for about the first nine months I was here, and the rent was more than my mortgage at home," Crawford said in an interview Thursday. "That, economically, just doesn't make much sense."

Instead of shelling out thousands of dollars to a landlord, he now sleeps in a space the size of a walk-in closet.

When asked for a tour Thursday, he opened the door wide and allowed people to glance inside.

The spot is small and tidy, and just big enough for the lawmaker to stretch his feet.

"This is my own creative little loft bunk that I made," he said. "Believe it or not, that's an extra long twin mattress, so it's comfortable."

"This ain't exactly Shangri-La," he noted.

"I stay out of people's way. I put up a sign on the door so the cleaning crew knows I'm in there," he said. "There's no chance they're going to be caught off guard." 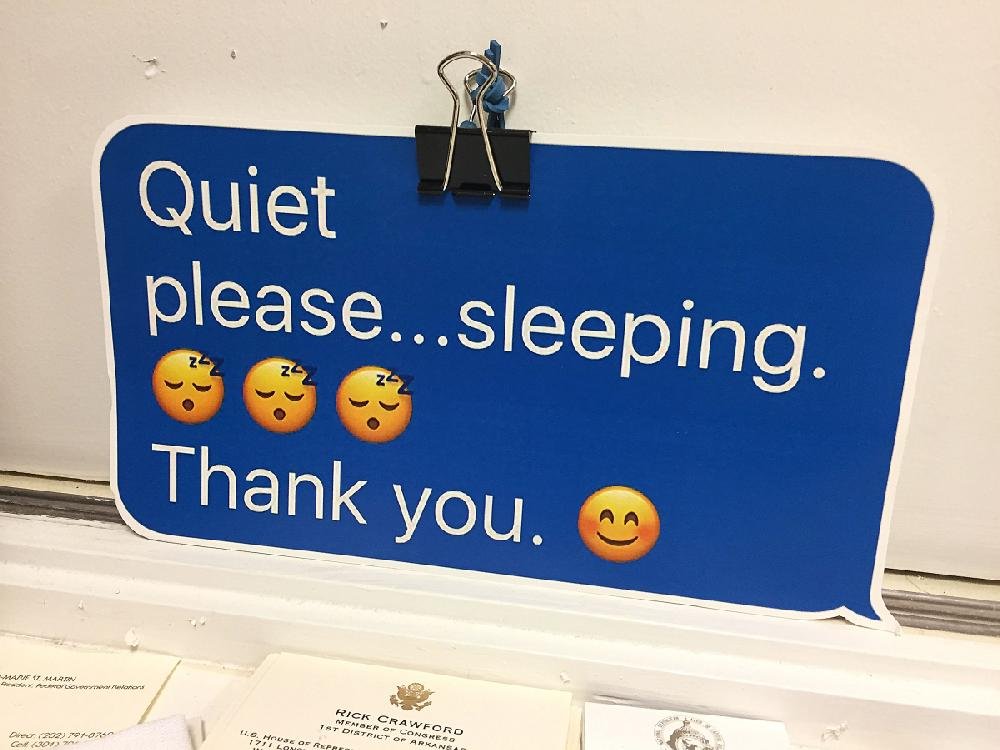 U.S. Rep. Rick Crawford posts this sign when he beds down in his office. In addition to lowering the noise level, the sign lets the cleaning crew know he’s there, Crawford said.

So far, the arrangement has been trouble-free, he said.

"Everything works out great," Crawford added.

The five-term lawmaker said he isn't interested in becoming a Washingtonian.

He prefers to be in Jonesboro with his family, he said.

The eviction efforts, if successful, would make it harder for non-millionaires to serve in Congress, Crawford said.

"I'm just a working class guy. I'm just up here trying to do the best I can to represent my district, and I don't want to be penalized for that," he said.

Republicans have been sleeping in or near their Capitol Hill offices for decades.

U.S. Rep. Dick Armey of Texas slept on a cot in the House gym in the mid-1980s until then-Speaker Tip O'Neill evicted him.

In 1995, after Republicans took control of Congress, then-Speaker Newt Gingrich said he wouldn't prevent colleagues from crashing in their offices.

"Unless it becomes a health hazard, I don't think I want to micromanage the personal lives of members," Gingrich said, the Los Angeles Times reported at the time.

Democrats have attempted, off and on, to end the practice ever since.

In December 2017, members of the Congressional Black Caucus wrote a letter to the House Ethics Committee questioning "the legality and propriety" of the on-site living arrangements.

"The House office buildings are 'OFFICE' buildings," they wrote. "In effect, Members who sleep in their offices are turning the people's House into private bedrooms. Subjecting staff, constituents, and House guests to Members' private bedrooms is inappropriate, disrespectful and unsanitary."

Last year, U.S. Rep. Bennie Thompson, D-Miss., reignited the debate by filing the No Couches for Congress Act, which would outlaw office dwelling while also allowing House members to deduct up to $3,000 in living expenses from their taxable income.

Twenty-three lawmakers -- all Democrats -- signed on as co-sponsors.

The proposal stalled in committee when Republicans were in charge.

Dozens of Republicans, including then-House Speaker Paul Ryan, were among those sleeping on cots, couches and mattresses in their offices. A small number of Democrats have also used the money-saving tactic over the years. 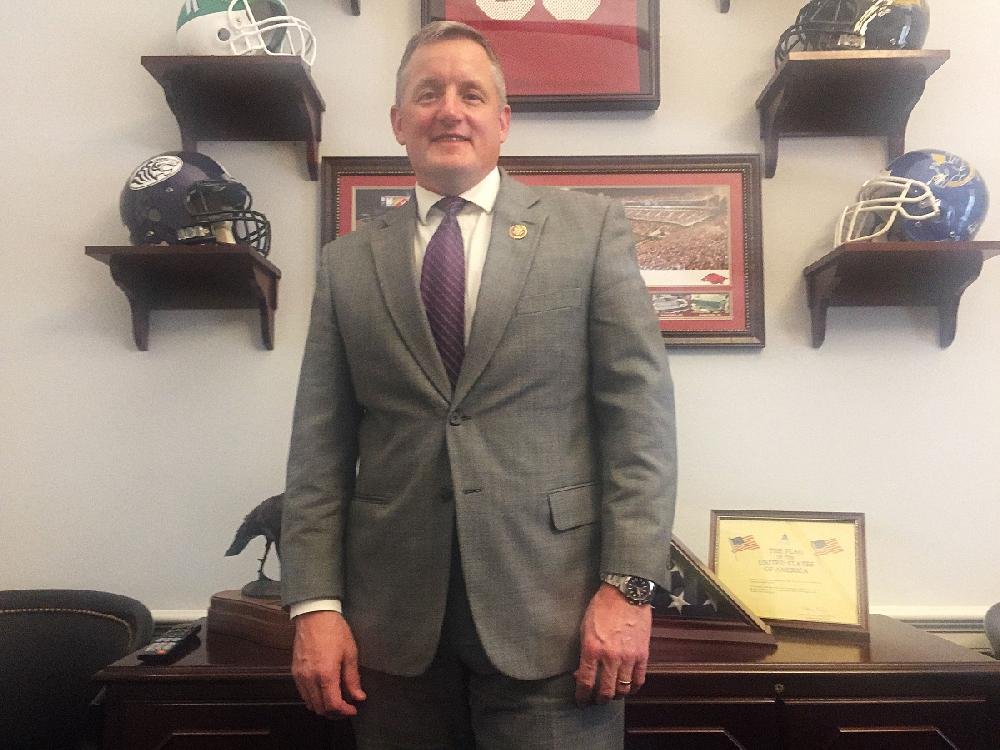 U.S. Rep. Bruce Westerman says he’s happy with his sleeping arrangement and estimates that he sleeps four or five hours a night while in Washington. He showers at the congressional gym.

The arrangement is more comfortable than it used to be.

"I've upgraded. I used to have an air mattress. I've got a real mattress now," he said.

Renting an apartment didn't make a lot of sense, in Westerman's view.

Lawmakers are only in Washington "three nights a week, 30 to 40 weeks out of the year," he noted.

Westerman has joined the congressional gym and showers there.

He estimates that he sleeps roughly four or five hours a night when he's in Washington.

There's no extra mess, he said.

"I've got a little vacuum cleaner if I need to touch up the carpet during the week," he said. "You would never know anybody was sleeping on a cot in here at night."

It's noisy at times, Westerman said. With all the hallway traffic, silence is sometimes in short supply.

Eventually, one gets used to the arrangement.

"I tell people it's like camping," he said. "You may not sleep well the first night, but the second night you sleep like a rock."

Westerman has doubts about the motives of those who are attempting to outlaw the practice.

"I think this whole ploy is Democratic members wanting to get ... increased pay to justify the cost of renting an apartment up here," he added.