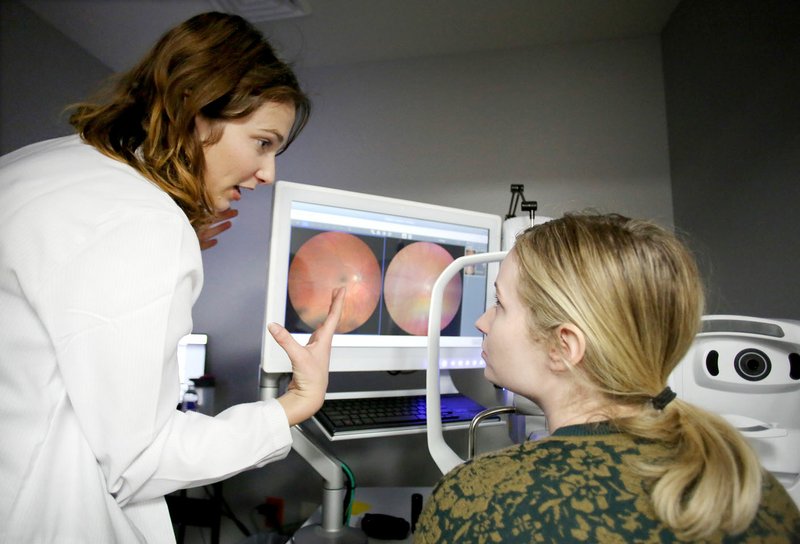 NWA Democrat-Gazette/DAVID GOTTSCHALK Dr. Emma Hendricks (left) explains to Aubrey Bland the results of her glaucoma screening Jan. 10 at Vold Vision at the Sam's Club in Springdale. The test photographs the optic nerve in the retna of the eye. January is Glaucoma Awareness Month and Vold Vision is providing free glaucoma screenings.

Michelle Smith was having headaches, so she decided to get her eyes checked.

The Fayetteville woman said she was pregnant and didn't want to take medication. She thought her vision could be causing the headaches.

"I remembered that my mom had glaucoma, and we had never really talked about the rest of us being tested," she said.

Smith went to an eye doctor and learned she had high fluid pressure in her eye and was diagnosed with glaucoma. She was 39 and an early patient of a new treatment.

Glaucoma is a hereditary disease that can lead to blindness. People older than 60 are more at risk of getting the disease, according to the Glaucoma Research Foundation.

Vold said while the risk for glaucoma increases with age, it's still important for younger people to be screened, especially if they have a family history of the disease. He said he's had glaucoma patients in their teens.

Smith said she hounded her two younger brothers to get screened after she was diagnosed. One of them had the disease. She also had her two older children tested and found her elementary-age child has high pressure, but no optic nerve damage. He doesn't have glaucoma, but could develop it and needs to keep an eye on it.

"It's really important to catch it early," Vold said. "If you get diagnosed at 90, you don't have as long of a trek to have the disease. When you're young, we've got to catch it early to treat it effectively. Otherwise, there's a significant risk of going blind in your lifetime."

Glaucoma-causing optic nerve damage is usually related to high pressure caused by a buildup of a fluid flowing inside of the eye, according to the Mayo Clinic. Fluid normally drains through tissue, but eye pressure increases when there is too much fluid or the drainage doesn't work properly.

Vold said peripheral vision is taken first and vision loss is so gradual people generally don't notice it at first. They've often lost a significant portion of their vision by the time they see an eye doctor, he said. Glaucoma is the leading cause of irreversible blindness worldwide, he said.

An estimated 3 million Americans have glaucoma, and half know they have it, according to the Glaucoma Research Foundation. More than 120,000 people in the U.S. are blind from glaucoma.

People older than 60, African-Americans, people with a family history of glaucoma, diabetics and people who are severely nearsighted have higher risks of glaucoma, according to the Glaucoma Research Foundation.

Dr. Andrew Iwach, a glaucoma specialist and clinical spokesman for the American Academy of Ophthalmology, said regular screenings for glaucoma are key because the disease is easier to treat if found early.

An eye doctor may measure eye pressure, test for optic nerve damage, test for vision loss, measure corneal thickness and inspect the drainage angle while checking for glaucoma, according to the Mayo Clinic.

The challenge is "getting busy, good people to come in," Iwach said.

Iwach recommends anyone with a family history of glaucoma and anyone over 40 be screened for the disease.

Dr. Austin Bell, an ophthalmologist with Boozman Hof in Rogers, specializes in glaucoma. He said his glaucoma patients include some with no symptoms and others who were diagnosed or told they have high pressure and didn't properly follow up with treatment. He said he's seen patients who know they have a family history of the disease avoid getting screened because they would rather not know they have it.

"Screening is huge," he said.

Bell said he often compares glaucoma to diabetes or high blood pressure in the sense doctors warn patients it's a chronic disease that can cause significant damage if not properly treated.

Glaucoma has traditionally been treated with daily eye drops, pills, laser or traditional surgery or a combination, according to the Glaucoma Foundation.

Patients recently gained another treatment option: the hydrus microstent. The U.S. Food and Drug Administration approved the treatment in August.

Older surgeries basically built a new drain for the eye while the hydrus treatment places a stent and opens the existing drain, Vold said. While cost of treatment can vary, patients have to buy eye drops each month for the rest of their lives while surgeries are a one-time fee.

Vold said the hydrus treatment is safer and less invasive than older surgeries and requires a shorter recovery time. Older surgeries sometimes required doctors to put a hole in the patient's eye. During a surgery called trabeculectomy, the surgeon creates a flap in the white part of the eye.

Infections caused by the older surgeries could mean losing an eye, he said.

Vold did the hydrus surgery for the first time on Smith.

Smith said eye drops weren't working well for her and she wanted a different treatment option. She wanted something with a short recovery time. It was right before football season and her husband, Mark Smith, is an Arkansas Razorbacks assistant coach. A week after she discussed options with Vold, the FDA approved the hydrus stent.

Bell said he does several procedures to treat the disease, depending on the patient and the severity.