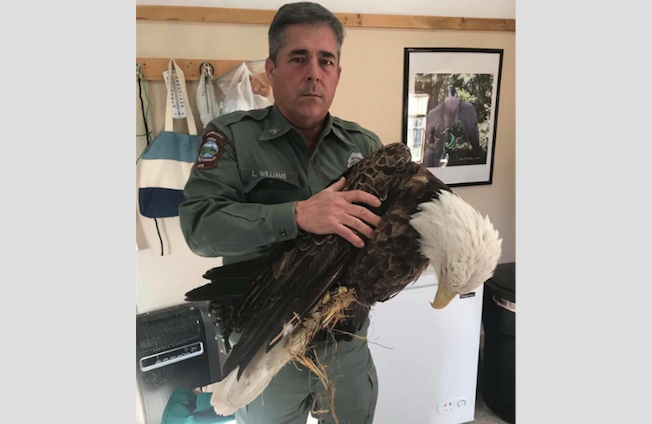 A bald eagle that was struggling to fly in central Arkansas was likely poisoned by lead, a raptor recovery expert said Monday following a weeklong search and rescue of the national bird by state wildlife agents.

Arkansas Game and Fish Commission officers captured the bird Saturday in Perry County following reports that it was having trouble flying and was in need of treatment.

Rodney Paul, director of Raptor Rehab of Central Arkansas, said he’s “confident” the bird is suffering from lead poisoning, which can be fatal and has few treatment options.

Wildlife officers brought the eagle to the El Paso-based center after they caught it flying low to the ground along Arkansas 324.

The eagle eluded officers for about a week after people in the area reported concerns that it could only fly a short distance. But its health had drastically deteriorated over the past week, Game and Fish spokesman Trey Reid said.

He said the eagle didn’t have injuries indicative of shooting or being hit by a vehicle, but the bird “wasn’t doing too well” when officers found it.

And its condition had worsened Monday, Paul said. He cited the eagle’s symptoms — lethargy and weakness — as clear indicators of lead poisoning, which is excruciating for raptors before they die.

“Watching a bald eagle die of lead poisoning is extremely heartbreaking,” Paul said, adding that options for treating the illness are limited as the raptor experiences tremors, labored breathing and loss of muscle control. “It’s really hard to watch our national symbol die like that.”

Of the half-dozen raptors he’s treated for lead poisoning, he said only one survived and returned to the wild in the past 15 years. The main treatment for the sick birds is to inject them with a substance that attracts the lead and passes it out of their body.

“By the time they’re brought to our facility, the lead poisoning is too far progressed to pull them back,” Paul said.

Lead toxicity has is a growing concern among raptor recovery experts and national researchers. They say eagles and other raptors who scavenge for prey are sickened after eating the carcasses of animals killed with lead-based bullets.

Paul said it’s difficult to tell if the eagle ate something contaminated with lead in Arkansas because bald eagles migrate from northern states during the winter.

State officials recover a handful of eagles and other raptors each year.

But the agency doesn’t always have the money or time to respond to every single sick or injured animal, Reid said.

Instead, they turn to groups like the raptor center, which isn’t open to the public, which rely on donations to fund their treatment operations that come free of charge for the state.

Paul said he was continuing to treat the eagle for lead poisoning on Monday.