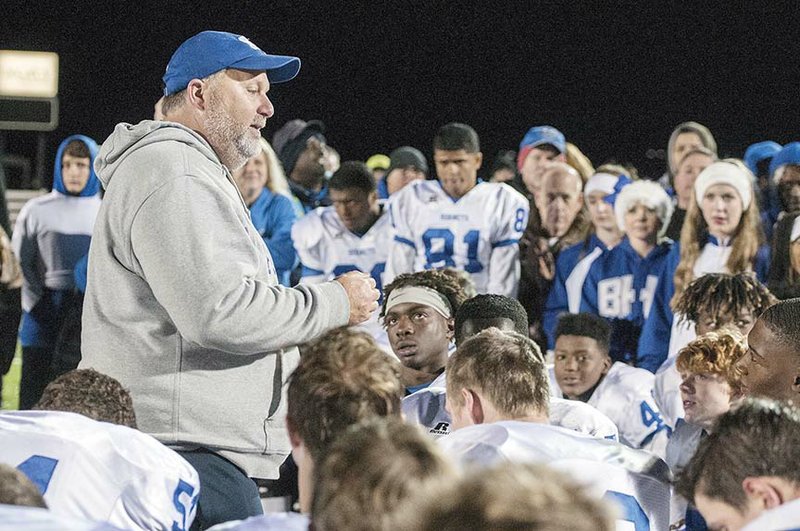 Bryant coach Buck James talks to his team after the Hornets beat Springdale Har-Ber on Nov. 18. James, who coached the Hornets to the Class 7A state championship, is the 2018 Tri-Lakes Edition Coach of the Year.

BRYANT — Buck James is used to being part of history. It started in 1981, when he helped now-defunct Jefferson Prep, in Pine Bluff, to the school’s first-ever state title. In 1994, he was part of a Monticello High School staff that guided the Billies to the program’s first-ever state title. James’ first title as a head coach at Camden Fairview in 2012 was that school’s inaugural championship.

Then there’s the coup d’état. When James took over the Bryant High School program three years ago, the Hornets had never advanced past the quarterfinal round. James promptly led them to the semifinals his first two seasons, and this year, he made good on a promise he made to players’ parents before his first season — he orchestrated the school’s first state championship.

“I guess I have never been a program builder, but I have been able to win in places they hadn’t won [a state title before],” James said. “I followed a great coach at Camden Fairview in Marion Glover, and the same thing at Bryant. Paul Calley (Bryant’s former coach) had everything in place.”

For his efforts in bringing a title to Bryant, James earned 2018 Tri-Lakes Edition Coach of the Year honors.

After a successful run at Camden Fairview, which included three state-title-game appearances, James accepted a job as assistant athletic director at Little Rock Christian. When longtime Bryant coach Paul Calley surprised some by taking the same job at Class 3A Harmony Grove in nearby Haskell, James jumped at the chance to coach again — not only to coach, but to work with one of his longtime friends and mentors, Bryant Athletic Director Mike Lee.

Twenty-five years ago, Lee was a Major League Baseball scout. James, who also coached baseball at Monticello, and Kirk Bock, who was a legendary prep baseball coach, were Lee’s “bird dogs,” helping him mine baseball talent in Arkansas and surrounding states.

That close relationship was at the heart of the hiring process, as Lee eventually picked James to succeed Calley.

As both sides worked the deal, James wanted assurance that Bock would be part of his staff. Bock was a trailblazer in his own right at Bryant, leading a solid program to its first state title. He won four titles at the school in seven years to go along with a title his team at Harrison won. He finished his tenure at Bryant with a 214-44 record and notched 600 career wins before he stepped away. Bock, like his late Hall of Fame father, Billy, earned a national reputation as a prep baseball coach, but he was also a valuable part of football staffs at schools where he led baseball programs.

“One of the first things I wanted was Kirk to be a part of the program,” James said. “I didn’t think it would unfold that way, where we could get him to be football-only. I knew he would help us in a lot of ways with his mentality and toughness, and I wanted that to be a part of our program. We feed off each other and have the same philosophy and vision.”

In James’ first season, as the Hornets were struggling to grasp his offensive concepts, Bock had quarterbacks and receivers on the turf under the lights at 6 a.m., working on running routes. As a result, the unit made major strides on its way to leading the Hornets to a surprising semifinal run.

“I give [Bock] a lot of the credit,” James said. “He is a great teacher. You have to break them down and build them back up. He got each kid to a higher level than they thought they could go.”

With the backing of Lee and the support of Bock and other hand-picked staff members, James felt confident the Bryant program had the ingredients to win a state championship, and he boldly predicted to parents in an introductory meeting that he planned to guide the Hornets to the title by his third season at the helm.

“I knew we had a good junior high class, and the class behind them was very talented,” James said. “All the things were there to make a good football team.”

After two consecutive trips to the semifinals, James wasn’t shy about his expectations for the 2018 team, which was loaded with talented veterans. James discussed the prospects of a state title early and often.

The season began with a bizarre 28-14 win against county rival Benton High School in the annual Salt Bowl. A chain of events early in the third quarter led to a scare that caused thousands of fans to evacuate the stadium. When officials realized there was no threat and order was restored after a lengthy delay, Bryant was awarded a forfeit win as per Arkansas Activities Association rules.

Two weeks later, Bryant endured a narrow loss to Fayetteville in its home opener but rallied to rack up a five-game winning streak to set up a 7A-Central showdown at North Little Rock. Both teams entered the game with unblemished conference marks. Bryant jumped to a 21-0 lead, but the Charging Wildcats came back and sneaked away with a 34-28 victory.

However, the Hornets didn’t have to wait long to get revenge. After disposing of Conway in the regular-season finale a week later, Bryant earned a first-round playoff bye. Fayetteville returned to Bryant seeking a season sweep, but a blocked field goal late preserved a 28-25 win over the Bulldogs.

Bryant caught a break when Fort Smith Northside upset Bentonville, allowing Bryant to host the semifinal game instead of traveling to Northwest Arkansas. The Hornets earned their first state-finals appearance by rolling past the Grizzlies 28-7, thanks to a strong second half.

Standing in the way of a state title was the defending state champion, North Little Rock, who was riding a 25-game winning streak.

Bryant’s defense was tenacious and contained the Charging Wildcats’ three-headed running-back monster of Oscar Adaway, Tyler Day and Brandon Thomas in the 28-7 win. Bryant didn’t allow a NLR third-down conversion until the third quarter and held them to their lowest point total since 2015, coach Jamie Mitchell’s debut season. Bryant record-setting senior running back Latavion Scott ran for more than 150 yards and 3 touchdowns.

“It was a great feeling,” James said. “I was so happy for our kids, with all of the work they have put in. I knew it was going to be difficult to get to [the title game], but I thought if we could get to War Memorial Stadium, we could win it. We were 10-1-1 at that stadium the past 11 games, so we felt like we had a chance there.”

This time, Lee is sure James will not only be known for winning a program’s first state title, but for winning multiple titles at the same program.

“We were back in the weight room working out on Monday [after the state-title game],” James said. “We started getting ready for next year. Our goal was always to win the state championship, and that is going to continue to be our goal.”