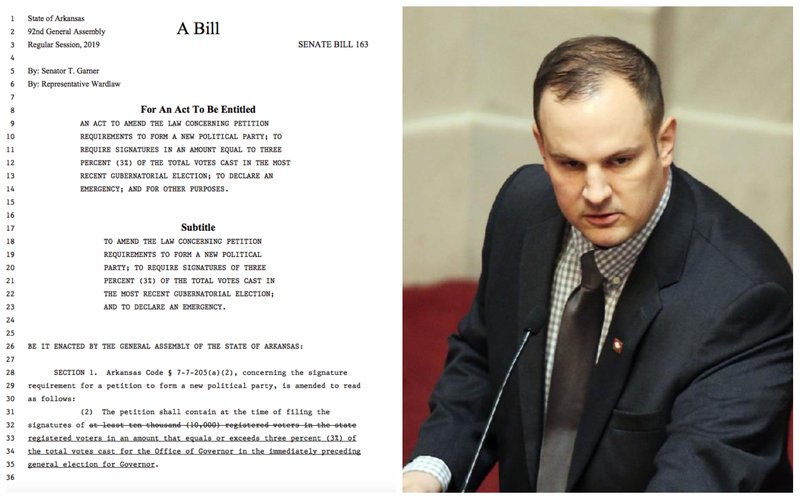 A screenshot of Senate Bill 163 is shown alongside a file photo of its sponsor, State Sen. Trent Garner, R-El Dorado.

In the wake of a dominant performance by Republicans in state and federal elections last year, a state senator from that party last week introduced a bill that would effectively double the work required for minor parties to access the ballot.

The head of the state's Libertarian Party, however, said the effect of the bill would be clear.

"Clearly, that would not be a welcome development for us," said Michael Pakko, the chairman of the Libertarian Party of Arkansas.

Current election law requires political parties to petition for ballot access by turning in 10,000 valid signatures of registered voters to the secretary of state's office. The petitions must be turned in at least 60 days ahead of the party filing period.

Garner's bill would increase that threshold to 3 percent of total votes cast in the last gubernatorial election, or 26,746 signatures, based on the turnout in 2018.

Because the party files petitions, Libertarian candidates have been able to get on ballots in each of the past four election cycles.

According to Arkansas Code Annotated 7-7-205, a "new" party is one that hasn't achieved "party status." To achieve that status, a party's nominee must receive at least 3 percent of the vote on the gubernatorial or presidential ticket.

The Libertarian Party's 2018 nominee for governor, Mark West of Batesville, earned 2.9 percent of the vote, or exactly 861 votes short of ensuring his party got ballot access in 2020.

By lacking party status, Libertarians must gather signatures every two years. No other minor party has gained a spot on the ballot for state races since 2014, when the Green Party ran a slate of candidates.

Pakko said Libertarians hoped lawmakers in this regular session would agree to make it easier for the party to access the ballot.

So far, he said, no lawmakers have expressed interest in carrying such legislation.

Garner said increasing the threshold would reserve space on the ballot for "serious candidates."

"It reflects our population [of more than 3 million people] a lot better than a static 10,000" threshold, Garner said.

Garner defeated an incumbent Democrat, state Sen. Bobby Pierce, by more than 9 percentage points in 2016, without any minor party opponents. Asked what past candidates he felt lacked seriousness, Garner declined to name anyone.

A candidate named Elvis Presley appeared on the ballot in Arkansas' 1st Congressional District last November. Presley, a used-car dealer and Elvis impersonator from Star City, told reporters during the campaign he was not a "novelty." He ended up earning 2.28 percent, as Republican U.S. Rep. Rick Crawford of Jonesboro sailed to re-election.

According to the secretary of state's office, the Libertarian Party submitted more than 15,000 signatures in both 2015 and 2017. The office certified 11,918 signatures as valid in 2015 and 12,749 signatures in 2017, granting the party a spot on the ballot in both election cycles.

Pakko said the canvassing effort to get those signatures cost about $30,000. Asked if the party would be able to collect several thousand more signatures, Pakko said, "I honestly don't know."

"It appears to stifle democratic participation in elections," Gray said.

A spokesman for Gov. Asa Hutchinson on Friday said the Republican governor had yet to review the bill.

Hutchinson coasted to victory in 2018, winning more than 65 percent of the vote against West and the Democratic candidate, Jared Henderson. None of last year's races for the Legislature, constitutional offices or Congress saw a Libertarian gain more votes than the margin of difference between the Democratic and Republican candidates.