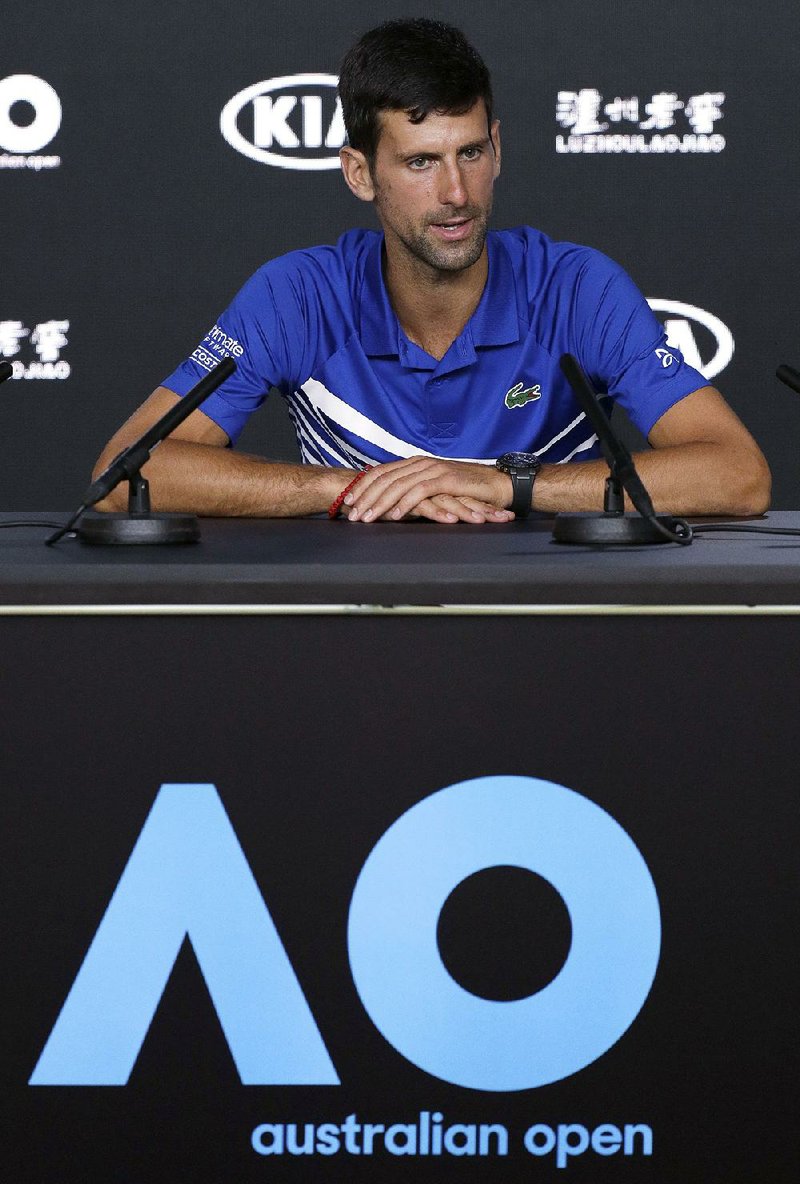 MELBOURNE, Australia -- Novak Djokovic was so good, so relentless, so flawless, that Rafael Nadal never stood a chance.

Djokovic reduced one of the greats of the game to merely another outclassed opponent -- just a guy, really -- and one so out of sorts that Nadal even whiffed on one of his famous forehands entirely.

In a breathtakingly mistake-free performance that yielded a remarkably lopsided result, the No. 1-ranked Djokovic overwhelmed Nadal 6-3, 6-2, 6-3 on Sunday night to win a record seventh Australian Open championship and a third consecutive Grand Slam title, raising his count to 15 overall.

"Under the circumstances," Djokovic said, "it was truly a perfect match."

No one who saw it would disagree.

Djokovic's coach, Marian Vajda, said: "I would describe it as dominance."

"Unbelievable," said Nadal's coach, Carlos Moya. "Novak probably could have won, no matter who the opponent was."

That Djokovic would produce 34 winners and only nine unforced errors was impressive enough. That it came against Nadal -- who is ranked No. 2, owns 17 major trophies himself and hadn't dropped a set in the tournament -- was hard to comprehend.

Djokovic left Nadal smirking or gritting his teeth or punching his racket strings, unable to compete at all.

Here's how Nadal explained it: To have a chance when Djokovic plays that well, something extra is required. Given that he's coming off a series of injuries, given that he hadn't played since the U.S. Open last September, Nadal couldn't raise his game.

Then again, Nadal conceded, "When the player did almost everything better than you, you can't complain much."

He broke his tie with Roger Federer and Roy Emerson for most Australian Open men's titles. He also broke a tie with his idol, Pete Sampras, for third-most Grand Slam trophies; Djokovic now only trails Federer, with 20, and Nadal.

And he is gaining on them.

Then there's this tidbit: Djokovic is the only man in tennis history to have a trio of three-consecutive-Slam streaks.

So let the talk begin about four majors in a row over two seasons, something Djokovic already managed to do from 2015-16. And, what's more, about a true Grand Slam, winning all four majors in one calendar year, which only has been done by two men, Donald Budge in 1938 and Rod Laver in 1962 and 1969.

"I am aware that making history of the sport that I truly love is something special," the 31-year-old Serb said. "Of course, it motivates me."

He surprised even himself with the way he recovered after problems with his right elbow derailed him.

Djokovic sat out the last half of 2017. He tried to come back at the start of 2018 but was hampered by the elbow and lost in the fourth round in Melbourne. Soon after, he decided to have surgery.

All that is in the past.

He is once again at an elite level. If anything, the gap between him and the rest is growing right now.

A year ago, could he have envisioned being here now?

"Not impossible, but highly unlikely. I don't want to sound arrogant, but I always believe in myself," Djokovic said. "I think that's probably the biggest secret of my success."

Right from the start, though, this shaped up nothing like their only previous Australian Open title match, back in 2012, which Djokovic won in 5 hours, 53 minutes, the longest Grand Slam final in history.

Evenly matched as they were that night, this time was no contest. It lasted just longer than 2 hours.

No ball, no matter how well-struck, was out of Djokovic's reach. He slid and stretched and occasionally even did the splits, contorting his body to get wherever and whenever he needed.

Djokovic grabbed 13 of the first 14 points, including all four that lasted 10 strokes or more. A trend was established.

Of most significance, Nadal was broken the very first time he served Sunday. That gave Djokovic one more break of Nadal than the zero that the Spaniard's five preceding opponents had managed.

Nadal could make no headway on this day. Djokovic won each of the initial 16 points he served and 25 of the first 26.

The longest was a 22-shot point, which ended when Nadal netted a backhand to give Djokovic a set point at the end of the first. Djokovic raised his right fist and held it there while staring at his guest box.

"One of the most important objectives for the match was to start off well and to bring in the right mindset and intensity," Djokovic said, "and make sure that he also feels my presence." 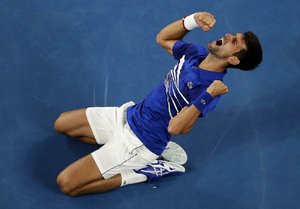 Photo by AP/MARK SCHIEFELBEIN
Novak Djokovic celebrates after defeating Rafael Nadal in the men’s singles final at the Australian Open.