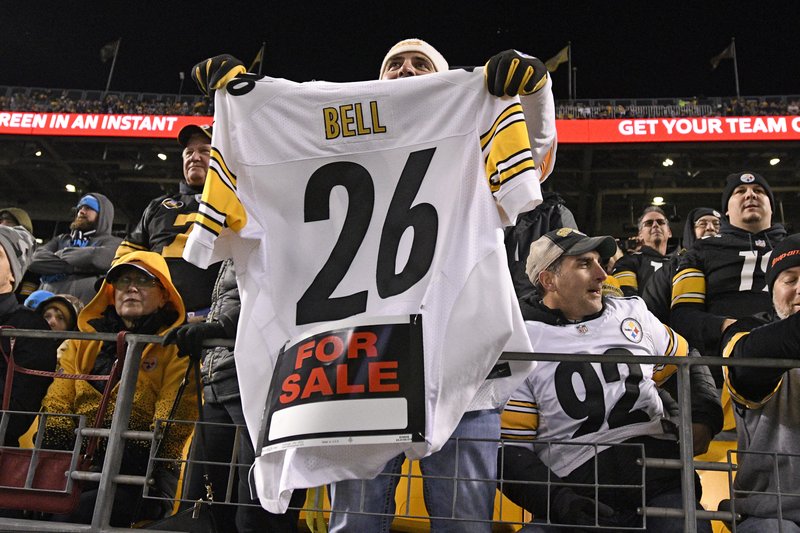 FILE - In this Nov. 8, 2018, file photo, a Pittsburgh Steelers fan holds a Le'Veon Bell jersey during the second half of an NFL football game between the Steelers and the Carolina Panthers in Pittsburgh. The steady exodus of mid-level veterans from the NFL is one element of a long-standing tension between players and the league over the structuring of contracts. The contract holdouts by Bell and Earl Thomas this season put the issue into vivid focus. (AP Photo/Don Wright, File)

By the time NFL players reach their third and fourth years in the league, the vast majority are struggling just to hang on because of injuries or younger, faster and often cheaper rookies out for their jobs.

In 2006 and 2011, the players union and the NFL tried to do something about that, adopting salary and bookkeeping rules with the potential to extend the careers of these veterans.

In a first-of-its-kind analysis, The Associated Press found that since 2005, the average amount of playing experience for athletes on the NFL's opening-day rosters has shrunk from 4.6 years to 4.3.

Teams are increasingly made up of a few star millionaires and an army of young players earning close to the minimum salary, with a dwindling number of older, journeyman athletes in the middle.

For most guys in the NFL, there is more at stake than salary. Those who make it three years plus three games become vested in the league's pension plan. Many players argue, too, that they deserve better from the NFL than to be treated as disposable, given the heavy toll the game takes on their bodies.

The exodus of the mid-level veteran is a longstanding source of tension between the union and the NFL, made more acute because of the increasing speed and violence of the game and advancing knowledge about the long-term effects of concussions. The issue could become a sticking point in the next collective bargaining negotiations; the current deal expires at the end of the 2020 season.

Union leaders argue they have fought successfully to increase the amount of money going to all players, in part by raising the NFL cap on team payrolls. As the union sees it, where front offices spend that money is their decision.

"Just as long as they spend it," said union President Eric Winston, who played for 12 seasons. "But how do you address something like that? Do you say, 'Well, let's mandate there are five to 10 guys on every roster who have four to seven years' experience?' OK, then which guys aren't going to make the roster because of that?"

Every September, third- and fourth-year players get cut to make room for younger and less-expensive athletes, who themselves will become expendable as soon as they are eligible for higher salaries.

Unlike the NBA and Major League Baseball, neither of which is as dangerous as football, the NFL has very few players with guaranteed contracts -- meaning, if they get injured or cut, they don't get their full salary. Some might even get nothing.

The story of ninth-year Seahawks safety Earl Thomas stands as a cautionary tale. Thomas held out through the preseason for a new, cash-up-front, long-term contract in case of serious injury.

He failed to get what he wanted and played instead under his soon-to-expire contract this year. In the fourth game of the season, he broke his leg.

In 2006, the "minimum salary benefit" was added to the collective bargaining agreement to help lower-paid veterans keep playing. It allows teams to sign players in their fifth year and beyond to one-year contracts at the league-mandated minimum for their experience level, while charging less than the full amount against the club's salary cap.

In 2011, the NFL and the union went further and slapped salary limits on first-round draft picks, in part to free up money to sign other players.

"The union got a lot of pushback from older players saying, 'I can't compete,' " said agent Joe Linta. The new rules "gave the teams the ability to judge them on equal footing."

But according to the AP data, since the introduction of the 2011 collective bargaining agreement, the average amount of playing experience among the 1,700 or so athletes on opening-day rosters has shrunk 3.3 percent. And the new contract terms did nothing to halt the exodus of players with five or more years under their belts.

"They're always going to go with the younger player," lamented James-Michael Johnson, a linebacker who retired at age 27 after getting cut seven times by six teams over four seasons.

Most teams use around 50 percent of the cap on their 10 highest-paid players, one of whom is almost always the quarterback. Rookie draft picks eat up between $5 million and $15 million. The 35 or so other players scrap for the rest -- and that amount is drawn down by money paid to injured athletes and those no longer on the roster.

Oakland Raiders defensive lineman Frostee Rucker, a 13th-year veteran who played for the minimum of $1.015 million in 2018, said the benefits he stands to collect when his career is over serve as an incentive to keep going. But he knows he is part of a vanishing breed.

The money "usually goes to the quarterbacks now," he said. "They essentially took the middle class out of football."