Change to Razorbacks' baseball stadium name up for a vote 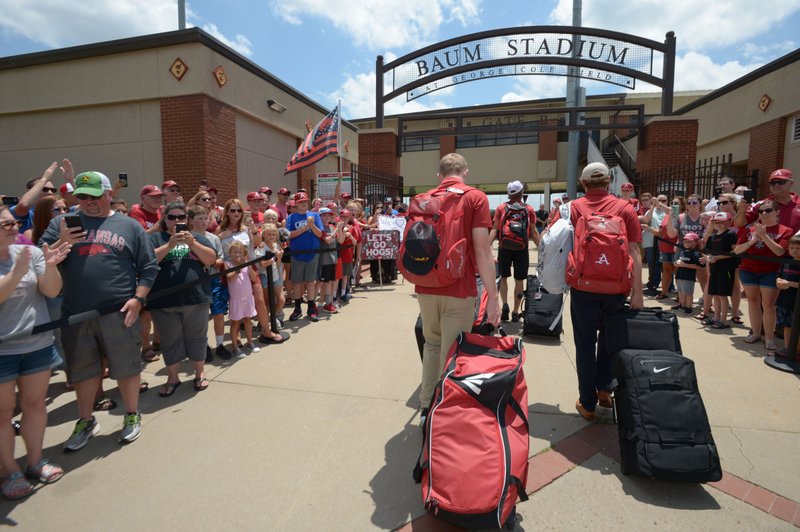 FILE — Arkansas players walk into the stadium with equipment and luggage on Friday, June 29, 2018, as fans line the sidewalk at Baum Stadium in Fayetteville to welcome back the Razorback baseball team from its trip to the College World Series.

FAYETTEVILLE -- The University of Arkansas board of trustees will vote this week on whether to modify the name of the Razorbacks' baseball stadium.

UA Chancellor Joe Steinmetz and UA System President Donald Bobbitt have recommended changing the name of Baum Stadium to Baum-Walker Stadium, according to an agenda for the two-day trustees meeting that will begin today at the University of Arkansas for Medical Sciences campus in Little Rock. Trustees are expected to vote on the proposal Thursday.

The request comes eight weeks after the Willard & Pat Walker Charitable Foundation pledged a $5 million lead gift toward the construction of a 40,000-square-foot operations center on the stadium grounds that is projected to cost as much as $25 million.

UA Athletic Director Hunter Yurachek said the Walker Foundation's $5 million donation was understood to be for naming rights to the stadium, pending approval of the trustees.

Baum Stadium opened in 1996 and was named for the family of Charlie Baum, who gave a series of lead financial contributions in the early '90s that totaled $1 million toward the stadium's construction.

The Walker family also donated $1 million toward construction, and a lounge in the suite level of the stadium was named for Johnny Mike Walker, the son of the late Willard and Pat Walker and a letterman on the Arkansas baseball team in 1975. The Walker Foundation also contributed to a 2004 renovation of the stadium.

In part because of several renovations, the stadium was ranked the No. 1 college ballpark in the U.S. last year by Baseball America. It alsotypically ranks among the top four college baseball venues each year in attendance.

"They have given us so much," former Arkansas baseball coach Norm DeBriyn said of the Walkers on Friday during a speech at the Arkansas Sports Hall of Fame induction for current baseball Coach Dave Van Horn. "... If it wasn't for Johnny Mike Walker, we wouldn't have Baum Stadium."

Over the course of a few weeks in 1992, Baum wrote two $250,000 checks as seed money toward a new baseball stadium at Arkansas, but the project did not get off the ground until the Walker family donated $1 million in 1994 to give the university $2 million in earmarked money.

Charlie Baum and Willard Walker were early business partners of Sam Walton in what would become Walmart. According to The Walmart Museum, Walker became store manager of the second Walton's 5&10 store, located in Fayetteville, in 1952 and Baum replaced him three years later.

"Those two families are synonymous with Razorback baseball," Yurachek said. "As the Razorback Foundation staff and I talked with Coach DeBriyn about it and Coach Van Horn about it, we thought it was appropriate -- we could have named the new clubhouse after the Walker family, but we just thought it was a good fit for the stadium to be named, in part, after the Walker family."

The baseball stadium would be the second athletics facility at Arkansas named for the Walkers. The Razorbacks' indoor football practice facility is named for Willard and Pat Walker, and the UA student health clinic is also named for Pat Walker.

"My family has been committed to Razorback student-athletes for decades," Johnny Mike Walker said last month in a statement about his family's $5 million donation. "As a fan watching from the stands, and as a former student-athlete, I have countless memories in Baum Stadium."

The field at Baum Stadium is named for George Cole, a former Arkansas athletic director and the namesake of the Razorbacks' old baseball park that was replaced by Baum Stadium. If approved, the official name of the facility would become Baum-Walker Stadium at George Cole Field.

Yurachek said it will take awhile for existing signage at the stadium to be replaced and reflect the name change.

"The Walker family understands that this is going to take some time for us to do that," Yurachek said.

During this week's meeting, trustees also will be asked to approve Kinco Constructors of Springdale and Little Rock as the general contractor for the operations building, and WER Architects (Fayetteville and Little Rock) and HKS Architects (Dallas) for the building design. The operations center will include a new clubhouse, offices, team meeting space and workout areas, and is expected to open sometime in 2021.

Jimmy Carter for WholeHogSports.com contributed to this article.

Print Headline: Change to Razorbacks' baseball stadium name up for a vote