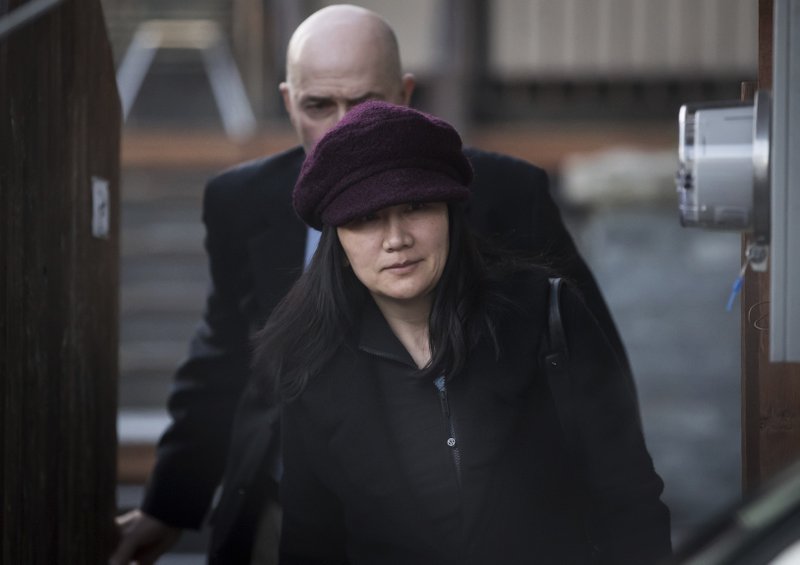 Huawei chief financial officer Meng Wanzhou, who is out on bail and remains under partial house arrest after she was detained Dec. 1 at the behest of American authorities, leaves her home to attend a court appearance regarding her bail conditions, in Vancouver, British Columbia, Tuesday Jan. 29, 2019.

U.S. officials Monday announced indictments filed in New York accusing Huawei Chief Financial Officer Meng Wanzhou and others of fraud in order to get around U.S. sanctions on Iran -- and in Seattle alleging Huawei tried to steal robot technology used to test cellphones from T-Mobile.

The timing, just before Washington trade talks aimed at resolving the U.S.-China trade war, fueled Chinese suspicions that Washington is using legal action as a political lever against China and the company.

Huawei is under intense pressure from the United States, which has largely barred use of Huawei technology by government contractors and is pressing allies to ban Huawei technology from 5G networks, arguing it poses a threat to national security.

China sees itself as the victim of a containment strategy by Washington to frustrate its ambitions to emerge as a global leader in high-tech fields. The indictments against Huawei -- which sells more smartphones than Apple -- are perceived by many Chinese officials as a major part of the strategy.

Part of the U.S. concern around Huawei relates to a provision in Chinese law that mandates all companies cooperate and collaborate with the national government on matters of national intelligence. This raises concerns that if Chinese authorities were to demand sensitive data from Huawei, the firm would have to comply.

"Companies like Huawei pose a dual threat to both our economic and national security, and the magnitude of these charges make clear just how seriously the FBI takes this threat," FBI Director Christopher Wray said at a Monday news conference.

In a statement, U.S. Sen. Tom Cotton, R-Ark., cheered the U.S. indictment of Huawei and its affiliates.

"Ordinary companies do not help rogue regimes like Iran evade U.S. sanctions, but Huawei is no ordinary company -- it is effectively an intelligence-gathering arm for the Chinese Communist Party," Cotton said. "Thanks to these indictments, we know more about China's collaboration with Iran, as well as its campaign of theft and economic sabotage against America. Huawei has played a key role in spreading China's spying capabilities around the world."

The Chinese Foreign Ministry said Tuesday that it was "highly concerned" about the "immoral" charges against Huawei and Meng, who is the daughter of Huawei founder Ren Zhengfei.

"For some time now the U.S. has been using its state power to smear and attack specific Chinese companies in an attempt to strangle their lawful and legitimate operations," said Foreign Ministry spokesman Geng Shuang. "We strongly urge the U.S. to stop its unreasonable bashing of Chinese companies including Huawei, and to treat them fairly and objectively," he said, adding that China was determined to defend its companies.

The new round of trade talks resumes today in Washington, and Steven Mnuchin, the Treasury secretary, said in a television interview Tuesday that the case against Meng would not affect them. "Forced technology issues are part of trade discussions," Mnuchin said, while emphasizing that any issues related "to violation of U.S. law or U.S. sanctions are going through a separate track, which is the Justice Department."

Meng's arrest in Canada last month has provoked a sustained campaign from China to persuade the Canadian government to release her without extraditing her to the U.S. -- a move that would breach Canada's extradition treaty obligations.

Huawei is China's most successful high-tech firm and one of its most prominent global champions, raising questions about whether Chinese firms can succeed in global markets if pressed by the United States government.

The U.S. has banned government use of Huawei technology in 5G networks and demanded allies do the same. Australia, New Zealand and Japan have done so, while in Europe companies like Orange and BT Group have announced they are excluding Huawei technology from core 5G systems. Deutsche Telekom has announced it is reconsidering its procurement plans. Canada's government, under intense pressure from the United States, is considering the matter. Vodafone announced last week that it was suspending Huawei's participation in its 5G system.

Poland, where a Huawei employee was arrested this month on suspicion of spying, is also considering whether to exclude Huawei from 5G networks, as are Norway, Belgium and the Czech Republic. The setbacks in Europe 5G networks have the potential of striking a major blow to the company's profits and development.

Huawei in Poland sacked the employee, Wang Weijing, adding that it required all employees to obey the laws of the countries in which it operates.

China repeated its call Tuesday for Washington to drop the indictment against Meng and to stop extradition proceedings.

"We again urge the U.S. to immediately withdraw its arrest warrant for Meng Wanzhou and to refrain from issuing a formal extradition request, to avoid going further and further down a mistaken path," Geng said. He said Washington and Ottawa had abused their extradition treaty, taking unjustified action that jeopardized Meng's rights.

Meng is currently out on bail in Canada awaiting an extradition hearing.

The indictment says that Huawei's misrepresentations to the U.S. government and four multinational financial institutions began in 2007. It cites an interview between agents of the FBI and Ren around July of that year, in which Ren said that his company complied with all U.S. laws and that it had not dealt directly with any Iranian company.

The indictment also cites 2012 testimony before the U.S. Congress in which a Huawei executive said the company's business in Iran had not violated sanctions. That executive was Charles Ding, a corporate senior vice president. Ding, who was not mentioned by name in Monday's indictment, couldn't be reached for comment.

Also in the indictment is a reference to a file found on an electronic device that Meng was carrying when she arrived at New York's John F. Kennedy International Airport in 2014. Officials detained her for a couple of hours when she arrived, according to a person with knowledge of the events. During that time, they briefly confiscated her electronic devices, said the person, who asked for anonymity because the events haven't been made public.

The file she was carrying, which the indictment said may have been deleted before being discovered, contained "suggested talking points" about Huawei's relationship with Skycom, the company that prosecutors accuse Huawei of using as an unofficial subsidiary to obtain U.S.-sourced goods, technology and services for its Iranian business.

The indictment also said that Skycom employed at least one U.S. citizen in Iran, a violation of American law. And it said that after Huawei found out that the United States was pursuing a criminal investigation in 2017, the company destroyed evidence and tried to move unspecified witnesses who knew about its Iranian business to China, beyond the reach of the U.S. government.

Information for this article was contributed by Robyn Dixon of the Los Angeles Times and by Paul Mozur and Raymond Zhong of The New York Times.