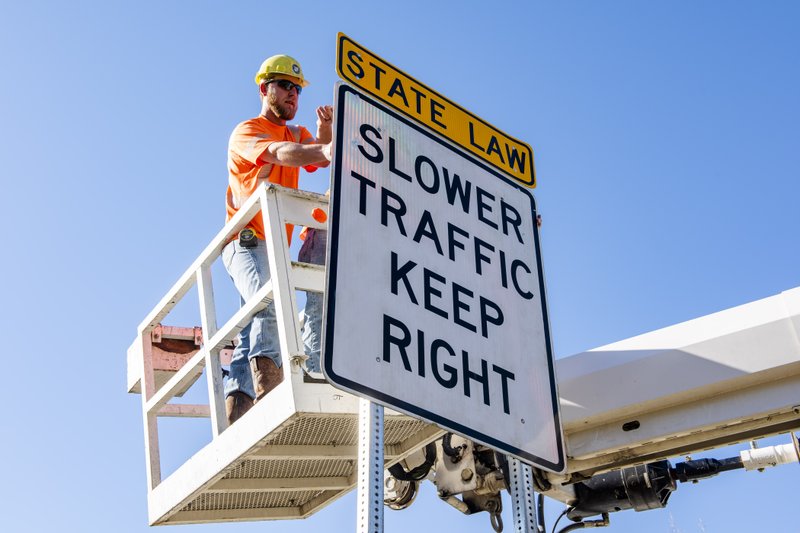 New signs are going up across the state letting motorists know that state law prohibits them from continuous travel in the left lane of multi-lane highways when it impedes traffic flow, the Arkansas Department of Transportation said Wednesday.

The yellow “State Law” signs are being installed directly above all “Slower Traffic Keep Right” signs already in place on applicable multi-lane highways.

A total of 550 of the new “State Law” signs were produced at a cost of $8,300, said Danny Straessle, the department spokesman.

Arkansas Code Ann. 27-51-301 states that vehicles cannot be driven in the left lane except to pass other vehicles unless the right lane is closed or in disrepair or when vehicles are preparing to exit the highway from the left.

“The additional signs we’re adding are to remind drivers it’s a state law and not merely a suggestion for courteous driving,” Straessle added.

Prissy Hickerson, a former Arkansas Highway Commission member and state representative from Texarkana, was a co-sponsor of the 2013 legislation.

Hickerson was unaware that the new signs were being installed but welcomed the move in an interview Wednesday.

“I’m glad to see they’re putting the signs up,” she said.

Hickerson and the co-sponsor of what became Act 965, former state Rep. Nate Steel, D-Nashville, wanted “signs that were a little bit more aggressive” than “Slower Traffic Keep Right,” she said.

“That’s a negative connotation,” Hickerson said. “No one wants to think they’re slow. What we wanted was signs that said stay right unless passing or stay right.

“That has been a little bit of the frustration that I have heard some feedback on.”

Whether the additional signs will work is an open question, but Hickerson said she remains hopeful.

“I don’t know,” she said. “I think so. I think it will definitely help if people realize it is a law they not travel in that lane. Surely it will help.”

If not, Hickerson predicted the issue would be “revisited.”