Venezuela cracks down on U.S.-backed Guaido 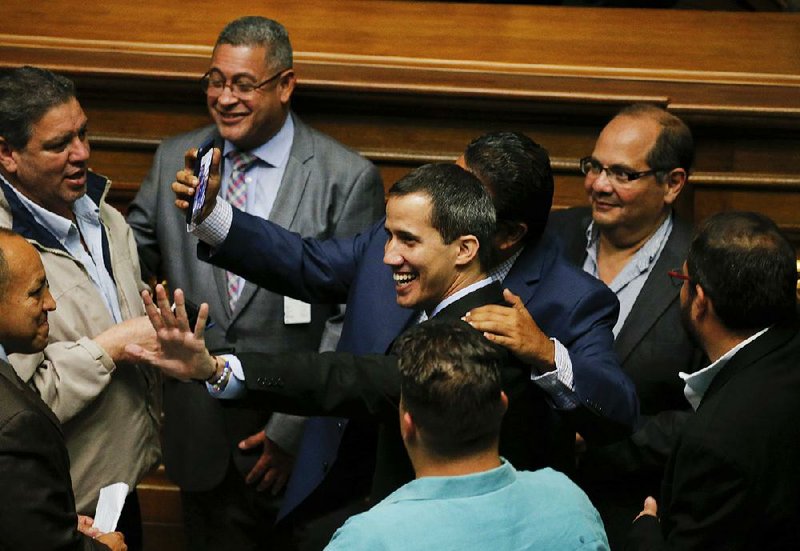 Earlier, speaking at the opposition-led National Assembly, which he heads, Guaido responded to the chief prosecutor's request by dismissing it as "nothing new under the sun." He said it came from "a regime that doesn't give answers to Venezuelans" and whose "only answer is persecution and repression."

Guaido added: "The world is clear on what's happening in Venezuela. ... Let's not desist because of threats and persecution. We will continue to advance in our fight."

Before the court's decision, the United States, which backs Guaido as the legitimate leader of Venezuela, pushed back hard against the chief prosecutor's effort. "We denounce the illegitimate former Venezuelan Attorney General's threats against President Juan Guaido," White House national security adviser John Bolton wrote on Twitter. "Let me reiterate -- there will be serious consequences for those who attempt to subvert democracy and harm Guaido."

The high court's decision came after the U.S. escalated its efforts to unseat leftist President Nicolas Maduro on Monday by punishing the state oil company, Petroleos de Venezuela. The move was an effort to transfer control over it to the opposition.

The U.S. move freezes $7 billion in U.S.-based assets and blocks more than $11 billion in revenue that Venezuela would get from oil sales next year through its U.S.-based company Citgo, which owns three refineries in the United States and employs thousands of workers.

"Today's designation of [Petroleos de Venezuela] will help prevent further diverting of Venezuela's assets by Maduro and preserve these assets for the people of Venezuela," Treasury Secretary Steven Mnuchin said in a statement Monday.

Any money going to the oil company would be put into accounts that a transitional government headed by Guaido would eventually have access to.

Pompeo said the certification will "help Venezuela's legitimate government safeguard those assets for the benefit of the Venezuelan people."

Revenue from oil sales to the U.S. and from Citgo -- which imports Venezuela's heavy crude oil, refines it and distributes gasoline throughout the U.S. -- is one of the Maduro administration's main sources of income.

These oil sanctions, experts say, constitute the biggest blow that the populist Maduro, who rose to power in 2013 after leftist firebrand Hugo Chavez died and named him his successor, has ever confronted.

"Venezuelan heavy oil is not easy to place. These sanctions leave the government with a tiny maneuvering margin," said Henkel Garcia, head of local consulting firm Econometrica. "This is not just a big blow to Maduro but also to the Venezuelan people. It will hit the population hard in the short term with scarcity of food and medicines and even of gasoline."

On Tuesday, Russia extended its criticism of the U.S. stance on Venezuela, describing the latest sanctions as illegitimate, even as the Russian Finance Ministry acknowledged that its loans to Caracas were at risk because of the crisis.

"You know the consistent attitude of Moscow toward such actions, which our American colleagues are taking more and more frequently," Peskov said. "We believe that in most cases, this is an instance of unfair competition."

Russian officials have continued to insist that Maduro is Venezuela's legitimate president and offered to mediate, along with Iran, among "responsible political forces" in the country. But they have not offered details about any specific new help that Russia would be willing to provide to Maduro.

Instead, Russia's Finance Ministry acknowledged Tuesday that Venezuela's loan repayments to Moscow may run into some head winds. Deputy Russian Finance Minister Sergei Storchak said it is not clear whether a $100 million payment due from Venezuela in March will arrive on time.

"There will probably be some problems," Storchak told reporters, according to the Interfax news agency. "It'll all depend on the army, on the servicemen, how loyal they prove to be."

The sanctions come during a tense week in Venezuela. Overnight protests are surging and are being met with harsh repression. At least 35 people have been killed, and more than 800 detained in a week. More protest marches are scheduled this week.

Many Venezuelans are desperate for change as they confront crippling hyperinflation and scarcity of medicines, but many worry that U.S. sanctions will make the situation even worse in the short term.

At a supermarket in central Caracas on Tuesday, people were making nervous purchases amid predictions that food will become scarcer after the sanctions.

Amaury Caraballo, 62, a businessman, said he has been trying to buy more food but prices are too high to accumulate much.

"I support the sanctions because it's the only way to pressure the regime," he said. "Everyone in the country is struggling to find food and medicines already. I'm definitely worried the sanctions will harden the situation for us, and I'm getting prepared for it, but I think it will be a good thing in the long term."

A 63-year-old textile businessman, Jacobo Benzaken, said the sanctions will hit the people harder than they will hit the government.

"We will have no gasoline, no money, nothing," he said. "I'm scared of not having transportation, food. Everything is scary. If we're not doing well now, imagine what comes next?"

Speaking to soldiers before they held a military exercise in the Caracas suburb of Maracay, Maduro said the U.S. was leading a coup against him by threatening to send troops to the Colombian border, referring to the Bolton notepad.

"It's an infantile way of leading an imperialist foreign policy," Maduro said. "You, military leaders of our homeland have to stay loyal and subordinate, and defend us saying 'Yankee go home, get out of here.'"

He announced the intention of creating 5,000 "defense units" across the country and to grow the country's civilian militia to 2 million people. He then joined soldiers in the exercise, jogging with them.

This is the second military exercise Maduro has attended since his swearing in.

Separately, the State Department on Tuesday issued a new travel advisory for Venezuela, raising it to "Level 4 - Do Not Travel." The advisory cited "crime, civil unrest, poor health infrastructure, and arbitrary arrest and detention of U.S. citizens." In its travel advisory dated Jan. 24, the department ordered "the departure of non-emergency U.S. government employees and family members due to ongoing political instability."

Bolton has maintained that all options remain on the table when it comes to Venezuela, prompting questions about whether the top White House official showed off the notepad purposely as a warning and a show of mettle.

Acting Defense Secretary Patrick Shanahan said Tuesday that he has not spoken with Bolton about the possibility of deploying 5,000 troops to the U.S.-allied nation along Venezuela's western border. He declined to comment on whether he had spoken to anyone else in the administration about the possible involvement of American troops in the crisis.

"We're monitoring the situation very carefully, and we're watching and we're working very much in real time," Shanahan said. "The interagency led by the National Security Council and ambassador Bolton created a number of options. We support them with their policy development, and, as the situation in Venezuela evolves, we're there to give them advice and counsel and support."

In a televised meeting with diplomats Monday, Maduro fired back at the United States.

"John Bolton announced a series of immoral and illegal unilateral and criminal measures," he said. "With this measure they want to rob our company Citgo. Be alert, Venezuela." He added that the state oil company would take "legal and political actions" shortly.

Information for this article was contributed by Andreina Aponte, Rachelle Krygier, Anthony Faiola, Paul Sonne and Anton Troianovski of The Washington Post; by Scott Smith and Lolita C. Baldor of The Associated Press; and by Edward Wong of The New York Times. 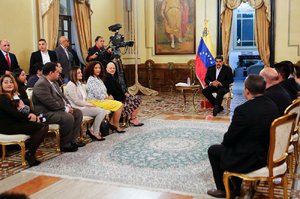 Photo by Miraflores Palace via The New York Times
Venezuelan President Nicolas Maduro (seated by flag) meets with members of his diplomatic corps Tuesday at the presidential palace in Caracas as pressure mounts on his regime. 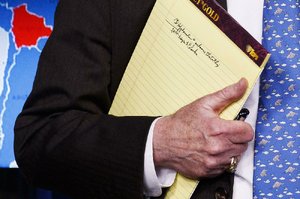 Photo by AP/EVAN VUCCI
National security adviser John Bolton holds a pad with the words “5,000 troops to Colombia” written on it during a news conference Monday in Washington. On Tuesday, Venezuelan President Nicolas Maduro, referring to the note, said the United States was leading a coup against him, and he urged his military leaders to remain loyal against “an infantile way of leading an imperialist foreign policy.”