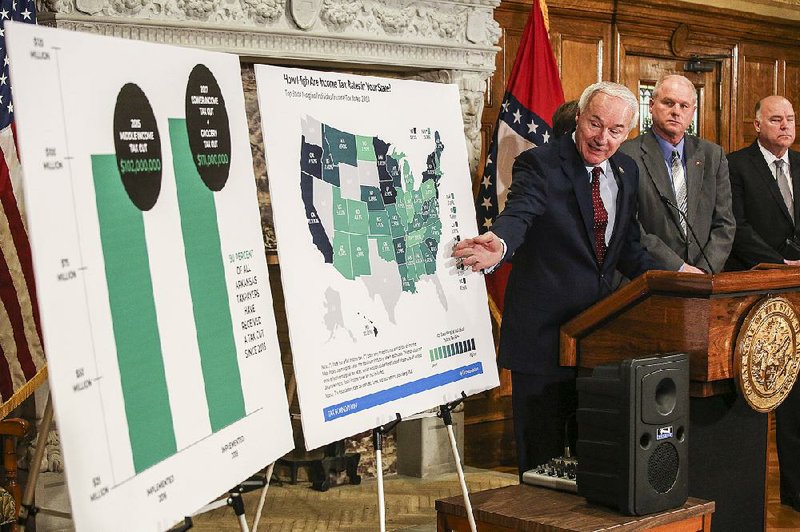 Gov. Asa Hutchinson rolls out his new tax plan Wednesday at the state Capitol. He said it would reduce revenue by about $25.6 million in fiscal 2020 and “is absorbable by our growth and the existing budget that we have presented.” ( Mitchell PE Masilun)

This plan would be phased in over two years and reduce revenue by about $97 million a year after it's fully implemented. The latest proposal sharply lessens the impact on the budget. The previous version of the governor's tax cut would have cut revenue by $192 million.

The Republican governor said the "5.9 plan" would restructure the upper-income tax table with three rates instead of the current six rates and trim the top rate for the middle-income tax table.

The current top rate of 6.9 percent applies to people with at least $79,300 a year in 2018 taxable income, said Scott Hardin, a spokesman for the finance department. Under the latest proposal, the 5.9 percent rate would apply to those making at least $80,500 a year.

"As you remember, I campaigned on lowering the tax rate to 5.9 percent over four years, and the estimated cost was $192 million [a year]," he said at a news conference in the governor's conference room, referring to his previous "2-4-5.9" income tax cut plan.

"Because of the incredible work of the legislative [tax overhaul] task force, their guidance on this, the fact we have been working on this with the legislative leadership over the past weeks and longer, we have come up with the '5.9 plan' that works better for the budget [and] allows us to get to the 5.9 percent in two years instead of four years," Hutchinson said.

About 578,983 taxpayers would get a tax reduction under the latest plan, including all of the approximately 218,108 taxpayers in the upper-income tax table, said Paul Gehring, an assistant revenue commissioner for the state Department of Finance and Administration.

"I think what we have here is a very manageable and measured tax cut that is going to provide significant relief and overall make Arkansas more competitive," said House Speaker Matthew Shepherd, R-El Dorado. Arkansas has the highest income tax rate compared with surrounding states.

"What you see is the first bill and really the most important bill of a process that will result in several other bills reforming our tax code and making us more competitive," Hendren said. "I think you will see [the tax proposal] move through the Senate next week."

House Democratic leader Charles Blake of Little Rock said Democrats plan to propose an alternative proposal that would create a state earned income tax credit with a lesser impact on revenue. But similar legislation failed to clear the Legislature in recent years.

The governor's plan is too focused on high-income earners, while also posing too great a hit to state funding for services, he said.

"We're still concerned as a caucus that this is not the smart tax relief that Arkansans need," Blake said.

Hutchinson said Arkansas has to compete with surrounding states for industry and capital and to retain talent.

Dropping the top rate from 6.9 percent to 5.9 percent will allow the state to be competitive, he said.

He said his 5.9 plan wouldn't reduce revenue as much as the previous version because "on the upper bracket, we reduced the benefit to the higher-income earners.

"The rate goes down, but some of the incremental brackets are not reduced and so that saved us on cost. It gets us to 5.9 percent quicker, and it achieves the goal of flattening that rate," he said.

The latest plan also doesn't reduce the number of individual income tax tables from three to one nor does it increase the standard deduction for married and single taxpayers as his previous plan did.

"When we increased the standard deduction [in the 2-4-5.9 plan], that cost a significant amount of money and that was why that number was much higher, like $190 million," said Larry Walther, director of the finance department.

According to the governor's office, a three-fourths vote would be required for approval of his "5.9 plan" in the 100-member House and 35-member Senate because certain rates in the upper-income tax table would be increased.

In the current upper-income tax table for people who make more than $80,500 a year, the state levies:

In the latest proposal, the rates for that same level of income would be:

Shepherd said seeking votes of 75 representatives will be more challenging than trying to round up a simple majority.

"This proposal kind of finds a sweet spot there as far as providing tax relief, but in a fashion that even those that maybe have some concern [about it], I think we are going to be able to build that support," the speaker said. "I am very optimistic we'll be able to get this done."

Hutchinson said his plan is projected to reduce revenue by about $25.6 million in fiscal 2020 and it's in line with his proposed general revenue budget and reserve funds needs.

"It is absorbable by our growth and the existing budget that we have presented," Hutchinson said.

In 2015 and 2017, the Legislature enacted Hutchinson's previous plans to reduce individual income-tax rates for people with up to $75,000 a year in taxable income. The plans are collectively projected to reduce revenue by $150 million a year.

"What we are doing today in the '5.9 plan' gives us the final phase of the three-part program to lower taxes in Arkansas and already we have provided tax relief for 90 percent of Arkansans," Hutchinson said.

The cut in individual income rates for people with less than $21,000 a year in taxable income became effective Jan. 1 of this year and is projected to reduce revenue by about $50 million a year.

The sales tax on groceries was reduced from 1.5 percent to 0.125 effective Jan. 1 of this year under a 2013 state law. It is projected to reduce revenue by $61 million a year, Hutchinson noted.

In February 2017, the governor announced that he wanted the General Assembly in 2019 to cut the state's top individual income rate to 6 percent. State officials projected that would reduce revenue by about $180 million a year.

Then in August, Hutchinson changed his income tax plan to what he called "2-4-5.9 plan" because of the rates that ultimately would be levied at different income levels. People with taxable income up to $8,000 would pay a 2 percent rate; those with between $8,001 and $18,000 in taxable income would pay 4 percent; and those making $18,001 and up would pay 5.9 percent.

That version also would have increased the standard deduction from $2,200 to $6,800 for single taxpayers and from $4,400 to $13,600 for married taxpayers. But a snag emerged earlier this month after state officials concluded that roughly 200,000 taxpayers would pay more than $30 million in additional income taxes under that second proposal.

Hutchinson said the plan announced Wednesday "was just a compromise that was reached that made sense."