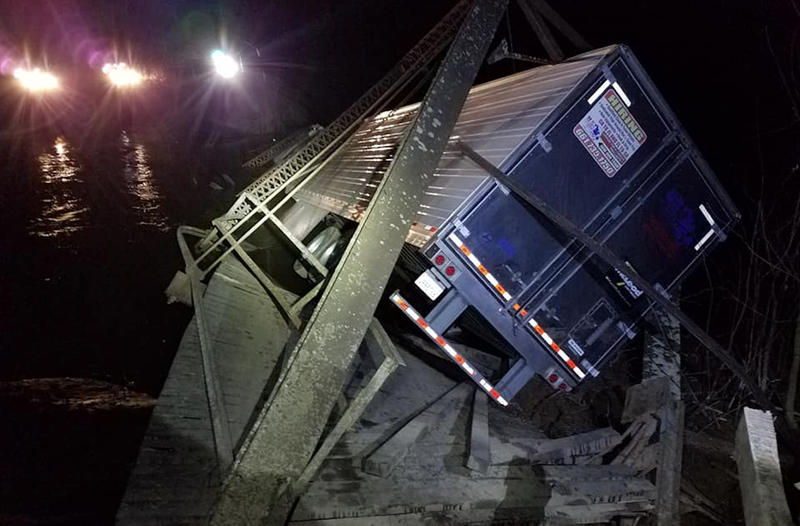 The Dale Bend Bridge near Ola collapsed the night of Jan. 30, 2019 as a truck attempted to cross it, the Yell County sheriff's office said. (Photo by Trisha Holt)

Crews were working Thursday to remove an 18-wheeler from a river in Arkansas after the driver, relying on his GPS, drove over a nearly 90-year-old bridge before it collapsed, officials in Yell County said.

Authorities responded to the bridge just after 8 p.m. Wednesday when the driver tried driving the truck across the Dale Bend Bridge near Ola.

Yell County Director of Emergency Management Jeff Gilkey said the driver had likely gotten lost and was following his GPS through narrow dirt roads before he got to the crossing.

The truck remained in the Petit Jean River on Thursday morning after continuing to sink overnight, “completely submerging” the trailer, Gilkey said.

“It’s quite a mess,” he said. “This is going to be an extensive recovery.”

The county is working with the driver’s insurance company to get the truck out “as soon as possible,” Gilkey said.

The bridge collapsed under the weight of the truck, tilting the vehicle on its side as it hit the water, the county sheriff's office said. Gilkey said the driver was “a little shaken up” but wasn’t injured after he managed to escape.

Weight restriction signs ahead of the bridge are listed at 6 tons. County officials said the truck was around 40 tons and carrying chicken products from a nearby farm.

Gilkey said he was surprised the driver made it to the bridge because narrow roads that often flood in the winter are the only way to get there.

Removing the truck might require bringing in equipment from outside of the state, he said.

“Our biggest concern now is remediation and getting a new bridge,” Gilkey said, adding that it's used often by local residents and outdoor enthusiasts visiting the area.

The Vincennes Bridge Co. built the bridge in the 1930s, according to website Bridgehunter, which catalogs historical information about U.S. bridges.